Delfina Delettrez Fendi is creating one-of-a-kind jewelry pieces in a gothic-romantic and slightly disturbing vein. Delettrez Fendi, remembers the first time her father saw her skull rings. "When he saw the skulls he asked me,'What did we do to you when you were a child!'" (photo Gianluca Daversa) A provocative bracelet created by the 20-year-old jeweler that has "eyes" of Murano glass. (photo Gianluca Daversa) 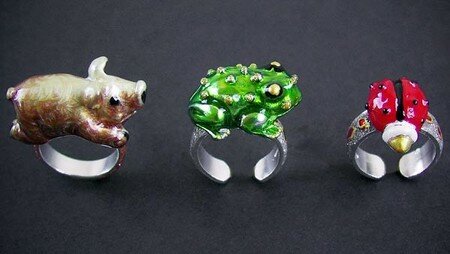 The first collection by the nascent jeweler was filled with gothic muses but her more recent works have been tempered by the arrival of her baby daughter. "The pregnancy gave me a softness that I didn't have before. When I started designing there were a lot of skulls but when I found out I was pregnant, I started to make pieces with little animals like pigs and frogs," says Delettrez Fendi. (photo Gianluca Daversa) Delettrez Fendi recently opened her first freestanding jewelry store on Via del Governo Vecchio in Rome, just minutes away from the Piazza Navona. Delettrez Fendi wanted the tiny store, with its absinthe-green display cases, 19th century pharmacy furnishing and a multitude of miniature drawers that house her handcrafted creations, to have the feel of a witch's house. (photo Roberto Fiorina ) Delettrez Fendi has just completed a capsule line of gloves with the French glove maker Causse. The supple black leather pieces are adorned with the jeweler's fetish skulls, frogs and insects. (photo Courtesy of Causse) A sneak peak at her next collection shows that her home city of Rome has found its way into the line with a series of rings outfitted with crowns. "Living in Rome it is hard not to be influenced by religion," declares Delettrez Fendi. (photo Gianluca Daversa)