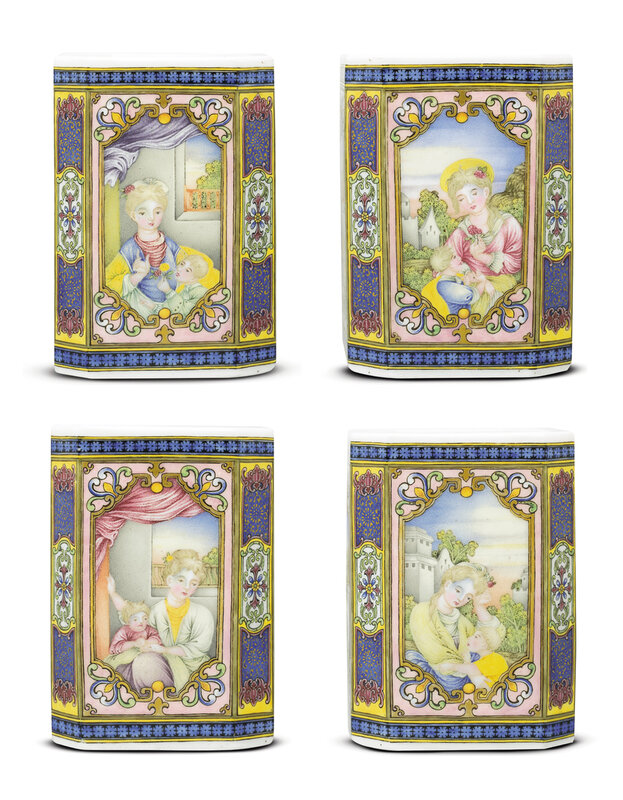 Of square section with canted corners, the translucent milk-white glass ground is superbly enamelled on each side with a differing European 'mother-and-child' scene, including a lady seated in an interior setting, with a curtain above, her right hand raised in a studied pose, her son holding a flower up for her, with foliage visible beyond the balustraded, open window, another in an exterior setting with trees, mountainous landscape and a European castellated residence, the woman in a straw hat, with a flower in her hair, holding another flower in her left hand, her son at her knee, another in an interior setting with foliage visible beyond a distinctly Chinese, curving balustrade, resting her right hand on a column beneath a curtain, her son beside her at her knee, and the last another exterior scene with European architecture, some castellated, the woman with her hair tied in a cloth turban, resting her head on her left hand, her son at her knee in front of her, all within gilt scroll borders reserved on a pale puce-ground, each of the canted corners with a stylised florette panel enclosed by gilt-decorated blue-ground panels suspended by bats, reserved on a yellow-ground, a narrow black-ground band studded with blue star-shaped florettes encircling the rim and foot, the foot engraved with a wheel-cut mark, Qianlong nianzhi, 'Made in the Qianlong period', in regular script within a double-square, box.

The property of Mr. Robert Tsao.

Note: The present brushpot is one of the very finest examples of enamels on glass of the Qianlong period. Only one other brushpot, which appears to have been broken into several pieces and re-stuck, of this same form and decoration is known; in 1919, it was in the collection of a New York private collector published by J. Getz in Chinese Art Glass Objects, International Studio Magazine, 1919. It was later in the collection of Victor Ezekiel in the 1960s, and included in the exhibition, 'The Arts of the Ch'ing Dynasty', illustrated in Transactions of the Oriental Ceramic Society, 1963-64, vol. 35, no. 251; and published again by G.C. Williamson, The Book of Famille Rose, 1970, pl. X (top left).

From the shape, type of mark, subjects, border patterns, use of gold enamel and quality, the Ezekiel brushpot was obviously produced at about the same time as the present example, and their production was perhaps limited to these two only. The main difference between the two, however, is in the choice of colours from the famille rose palette. The Ezekiel brushpot has more predominant foliage in each main panel, allowing the greenish-yellow hues of the trees greater presence in the overall colour scheme. To match this, the artist has chosen to fill the four narrower panels with a combination of colours similar to the rocky ground and the trees to those of the main subjects, giving the overall work of art a predominantly khaki colour, which does not mix as harmoniously with the delicate pastel colours of the clothing of the figures as does the blue colour-scheme used here.

Early Qianlong Palace enamels on metal, glass and porcelain were characterised by their high artistic qualities combined with relatively perfect technical control. The height of Palace enamelling on metal and on porcelain was from around 1718 to the 1770s. There are little more than half a dozen pieces, either by reign mark or style to the Kangxi or Yongzheng periods. Cf. H. Moss, By Imperial Command, an Introduction to Qing Imperial Painted Enamels, Hong Kong, 1976, pl. 33, a small cup; Chang Lin-sheng, 'Ch'ing Dynasty Imperial Enamelled Glassware,' Arts of Asia, May-June 1991, pp. 95-107, fig. 3, a vase with formalised floral design; Moss, Graham, Tsang, The Art of the Chinese Snuff Bottle, New York, 1993, no. 183, an unmarked snuff bottle; and Chang Lin-sheng, Snuff Bottles in the Collection of the National Palace Museum, 1991, no. 73, another unmarked snuff bottle with a ruby-ground and a formalised floral design, all from the Kangxi period; and ibid. no. 28, a bamboo-shaped snuff bottle, and C. Brown and D. Rabiner, Clear as Crystal: Red as Flame. Later Chinese Glass, no. 20, a mallet-shaped vase with floral decoration, both with a Yongzheng reign mark. Otherwise, all of the known masterpieces are from the early Qianlong reign, probably from the first two or three decades.

During those years, in each of the arts, close interests from the Emperor were combined with carefully prepared sketches by Court artists, and enamelling work was executed by either master enamellers or by Court artists pressed into service as enamellers. Every single piece produced was composed afresh and conceived as a work of high art executed by Court artists or highly trained enamellers, mostly drawn from Jingdezhen or Guangzhou; if not Court artists from Beijing pressed into service as enamellers. These early Qianlong enamels on glass are among the rarest, and the finest, of all Palace enamelled wares from the Qing dynasty, existing in far smaller numbers than their equivalents in enamelled metal or porcelain.

Most early Qianlong enamelled glass wares are reign-marked, usually with one of three versions of the mark: an engraved regular-script mark very thin, blue enamel; an engraved seal-script mark, and a regular-script, four character wheel-cut mark within a square cartouche as on this example. This wheel-cut mark is also found on a wide range of glass wares from the Yongzheng and Qianlong periods and was obviously a standard in the Imperial glassworks, just outside the Forbidden City at Canchikou, in the Imperial City. As a mark it has its origins in the earlier, Kangxi examples. For a range of wheel-cut Yongzheng and Qianlong reign marks see, for instance, P. Lam, Elegance and Radiance. Grandeur in Qing Glass. The K.F. Lee Collection. Hong Kong: The Art Museum, The Chinese University of Hong Kong, 2000, nos. 8 - 11, 15- 21, 25 - 28, 53 - 55, 57, 58, 65, etc. For a range of all three types of marks found on early-Qianlong enameled Museum, 1991, nos. 29 - 72, where no. 66 is of a similar type to the mark found on the present brushpot. Compare also, op. cit., 1991, nos. 280 - 291 for a series of Palace glass cameo-overlay snuff bottles with a similar range of wheel-cut Qianlong marks. Although the use of this wheel-cut mark continued into the nineteenth century, the style and quality of the enamelling here represent the height of the art during the very early years of the Qianlong reign.

Early Palace enamels on glass are extremely rare and the vast majority of surviving examples are snuff bottles. The extreme rarity of vessels, other than snuff bottles, in the early Qing period painted enamels on glass is emphasized by the enormous holding of imperial enamels on metal and porcelain published from the National Palace Museum, 1991, nos. 29 - 72, where no. 66 is of a similar type to the mark found on the present brushpot. Compare also, op. cit., 1991, nos. 280 - 291 for a series of Palace glass cameo-overlay snuff bottles with a similar range of wheel-cut Qianlong marks. Although the use of this wheel-cut mark continued into the nineteenth century, the style and quality of the enamelling here represent the height of the art during the very early years of the Qianlong reign.

Early Palace enamels on glass are extremely rare and the vast majority of surviving examples are snuff bottles. The extreme rarity of vessels, other than snuff bottles, in the early Qing period painted enamels on glass is emphasized by the enormous holding of imperial enamels on metal and porcelain published from the National Palace included in the exhibition, Emperor Ch'ien-lung's Grand Cultural Enterprise, National Palace Museum, 2003, p. 144, fig. IV-12 (see fig. 2). Cf. also a Qianlong period enamelled glass vase, painted with Chinese woman and child in landscape, in the National Palace Museum collection, Taipei, included in the exhibition, Painted Enamels of the Ch'ing Dynasty, 1979, illustrated in the Catalogue, no. 146. For an enamelled glass snuff bottle, incised with the same type of mark, with European scenes of women and children, and possibly painted by the same hand as the present brushpot, see H. Moss, op. cit., 1976, pl. 36.

From the 1760's onwards, there was a rapid decline in artistic quality and commitment from earlier heights, and it became apparent that Court artists were no longer as vigilant as they were in the early part of the reign. Designs became more decorative and lacked the extraordinary artistic flare and technical mastery of the earlier masterworks such as the present brushpot.

Christie's. The Imperial Sale including Elegance and Artistry. Treasures from a Private Collection, Hong Kong, 27 May 2008