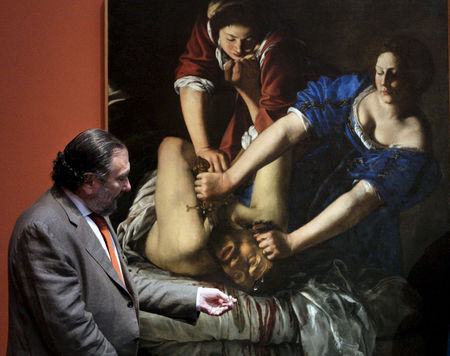 BILBAO.- The Museum of Fine Arts in Bilbao presents Artemisia Gentileschi's Judith and Holofernes on view through September 28. This as part of the museum's guest work program which has shown other works of art such as Martín Rico's Palacio de los Dux de Venecia and Agostino Doria's Portrait of a Gentleman before.

With her father Orazio, Artemisia Gentileschi (Rome, 1593-Naples, 1652/53), was part of the group of painters most directly influenced by Caravaggio. Giuditta e Oloferne (Judith and Holofernes), one of the masterworks in the Capodimonte Museum collection in Naples, has a number of interesting features beyond the high quality of the work. Art historians have long interpreted the picture in autobiographical terms, linking it to the artist’s legendary and, on occasions, tragic life.

The work is on show in gallery 10, accompanied by a signature painting from the Bilbao Fine Arts Museum collection: Lot And His Daughters, by Orazio Gentileschi (Pisa, 1563-London, 1639)

This is a dramatic and brutally graphic version of this biblical scene, but less so than a larger and even bloodier setting by Artemisia around 1620. She based her first glimipse on Caravaggio's famous painting from c. 1598-1599, but enlivens the action with realism and powerful female protagonists.

Judith was a Jewish widow of noble rank in Bethulia, a town besieged by the army of the Assyrian general Holofernes. She approached his tent as an emissary and captivated him with her beauty. He ordered a feast with much wine. After he passed out in his tent, Judith and her maid Abra saw their opportunity. Judith decapitated Holofernes with his sword and smuggled his head back to Bethulia. On seeing her trophy, the townsfolk routed the leaderless Assyrians. The story is an allegory picturing Judith as Judaism in triumph over its pagan enemy.

Artemisia may have painted the scene during or just after the trial of Tassi for raping her. He denied the charges but couldn't shrug off his record of sex crimes. He had previously served time for raping his sister-in-law and conspiring to murder his wife, whom he "acquired" by rape.

It appears that after a long period of sexual harassment by Tassi and the other male artists in his studio, he violated Artemisia's virginity, a requisite for marriage between decent people. A consensual sexual relationship continued because he promised to marry her. It is likely that Artemisia hoped that he would marry her to restore her reputation. Her father discovered the assault and charged Tassi with rape.

The trial was a painful public humiliation for Artemisia. During the proceedings, she underwent vaginal examination and torture with thumbscrews. She was accused of being unchaste when she met Tassi and also of promiscuity. He also attacked her professional reputation. A transcript of the seven-month court case survives.

It was not until recent years that research by Lapierre revealed that Tassi was found guilty. He was given the choice of five years hard labour or exile from Rome. He choose the latter, but he was back in Rome within 4 months, probably due to influence in high places.