"Joe Colombo: Design and the Invention of the Future" @ Kunsthaus Graz

"Joe Colombo: Design and the Invention of the Future" @ Kunsthaus Graz GRAZ.- Televisions that retract into the ceiling, pivoting walls with a built-in mini-bar, underground ‘nuclear cities’ – the works of Italian designer Joe Colombo could have emerged from the set of a contemporary James Bond film. They exude the spirit of the shrill Sixties yet also impress with their functionality and striking forms. One of the most successful designers of his time, Colombo produced design classics such as the “Elda” armchair, the “Universale” chair or the lamp “Alogena”. In 1971, he died at 41 years of age. The exhibition Joe Colombo. Design and the Invention of the Future is the first international retrospective dedicated to Colombo’s work. Produced in close cooperation with the estate of Joe Colombo, the exhibition presents an abundance of never-before-shown materials on Joe Colombo’s body of work. These include early original objects and prototypes of Colombo’s most important furniture designs as well as many original sketches, plans, brochures, architectural models, several films and original photos. Structured into four groups, the exhibition traces the rapid development of Colombo’s brief life and conveys a lively impression of the designer’s tremendous productivity that fascinated contemporaries even during his lifetime.

The first area shows Colombo’s early work from the 1950s. Colombo studied art at Milan’s Brera Academy and joined the Nuclear Painting movement in the early 1950s founded by Enrico Baj and Sergio Dangelo. Early on, he developed an interest in architecture, designed the Utopia of a subterranean nuclear city, frequented Milan’s jazz clubs and became interested in design.

The second part presents the start of Colombo’s career as a designer, beginning around 1962. Within just a few years, Colombo created many of his most well known designs and began productive collaborations with important design companies of his time like Kartell, Zanotta, Stilnovo, O-Luce, Alessi and Rosenthal, with most of his designs still being produced by these firms to the present day. With “Universale” from 1964-67, Colombo created one of the first chairs to be moulded from one material. He also achieved innovative forms with furniture in plywood, leather and rattan as well as lighting pieces that rank among the many well-known individual objects he designed. Over the course of his brief career, however, Colombo increasingly turned away from individual designs and moved more toward the creation of whole interiors and the search for modular and flexible objects.

The third section of the exhibition presents seating furniture like the “Tube Chair” and the “Multi Chair”, offering a wide range of possible uses, as well as the numerous examples of container furniture meant to shape the living space of the future as multifunctional units. Colombo’s vision of a rational world in which design should be based on scientific research is also illustrated by his many contributions in the field of industrial design, including automobiles, watches, ski bindings, glasses, air conditioning units as well as an inflight service tray for the Italian airline Alitalia.

In the fourth area of the exhibition, four selected projects from the last years of Colombo’s life show how the designer worked from 1969 to 1971 to realise the synthesis of all his previously developed ideas. In futuristic interiors like Visiona 1, his own apartment from 1970 and the Total Furnishing Unit from 1971, Colombo fused the individual objects of domestic interiors into complex, multifunctional “machines for living” that were to adapt to the needs and desires of inhabitants. With these designs that were far ahead of their time, Colombo created icons of futuristic design of the Sixties.

As made clear by the many photos of Colombo’s own apartments in which he himself is typically shown, Colombo was not only one of the most important designers of his time but also a gifted communicator and self-promoter. Always elegantly dressed and never without a pipe in his mouth, Colombo furnished fitting images to accompany his designs: that of a “designer dandy” who was fascinated by the possibilities of new technologies and the improvement of everyday life. He even perfected a simple object like a pipe by levelling off the bottom so it could be put down on the table without falling over. Colombo was hence both – one of the great future visionaries of the 20th century as well as a pragmatist for whom the future began with the little everyday things.

An exhibition of the Vitra Design Museum and La Triennale di Milano in collaboration with Studio Joe Colombo, Milan. 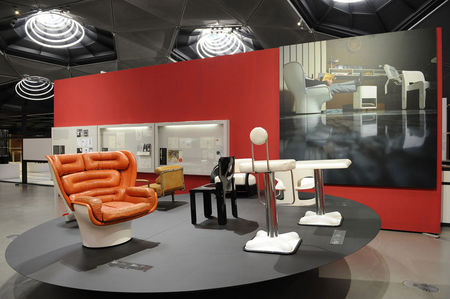 Commentaires sur "Joe Colombo: Design and the Invention of the Future" @ Kunsthaus Graz