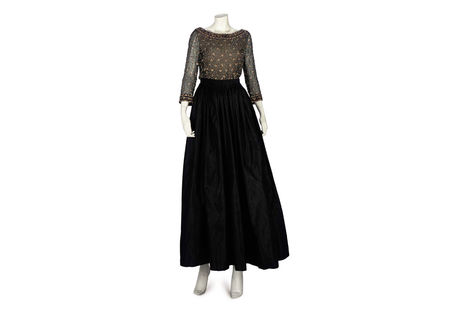 NEW YORK.- Supermodel Erin O’Connor is to sell a selection of dresses, jackets, shoes and bags from her personal wardrobe at Christie’s South Kensington on Tuesday 16 September at 1pm. Proceeds will go to the British Fashion Council, which provides financial support to aspiring fashion designers and models and helps them during the early part of their careers. Erin also recently started The Model Sanctuary, supported by the British Fashion Council, in response to the government’s Model Health Enquiry, which supports young models and looks after their health during London Fashion Week.

Her collection consists of approximately 30 exquisite and wearable items from many of today’s top designers. The clothes are affordable, with estimates starting from around £100 and sizes range from 39 to 41 (UK sizes 8 – 12).

• A group of long-sleeved silk Marc Jacobs and Alexander McQueen blouses worn in a show and featured on a Telegraph Magazine cover (estimate: £400-£600)

• Two Chanel suede and tweed bags which were gifts from Karl Lagerfeld (estimate: £450-£750)

Christie’s announced the auction of Resurrection: Avant-Garde Fashion, the finest collection of 20th Century fashion in private hands, will be sold in London at the South Kensington saleroom on October 30. Representing pivotal designers from the 1960s to 1990s, the collection is an articulate illustration of modern society and design shown through fashion — from Pop Art and the Space Age of the 1960s through the iconoclasm of the 1970s, and the revival of architectural couture of the 1980s and 1990s. With over 250 meticulously assembled garments, headwear and jewellery the collection offers a vision of the styles, materials and attitudes that have defined progressive international fashion since 1960. Estimates range from £500 to £10,000, and designers include Pierre Cardin, Paco Rabanne, André Courrèges, Rudi Gernreich, Ossie Clark, Vivienne Westwood, Norma Kamali, Azzedine Alaia, Gianni Versace, Issey Miyake, and others.

Since the start of the Atomic Age progressive fashion has evolved as the singular medium through which the disciplines of painting, sculpture and architecture have become suffused and then disseminated to an arena in which the celebration of youth, materials and modernity are designed to captivate. Towards the late 1950s dynamic new materials such as plastics, vinyl, metal, lurex and rubber began to stimulate a reaction within a new generation of international fashion designers. Reacting against the conservative salon system of the established couturiers, highly-trained visionary designers such as Pierre Cardin, André Courrèges, Emilio Pucci, Yves Saint Laurent and Paco Rabanne in Europe, and Rudi Gernreich in the United States, reflected the Zeitgeist of Pop Art and fashioned ready-to-wear garments of dramatically architectural form and substance.

Some of the most important designs that pioneer the use of new materials and new thinking about women’s clothes in the collection are by Paco Rabanne. Sexy, liberated and above all challenging, the auction includes key pieces from his most well known collections, such as an aluminum riveted plate dress (estimate £5,000 – 7,000). Other unique examples by Rabanne include a full length wedding dress made from plates of white leather linked by metal rings (estimate £6,000-8,000 ), and another spectacular dress rarely seen at auction made of transparent acrylic strips in tangerine and yellow (estimate £5,000-8,000).

Working in the heady atmosphere of revolutionary Paris of the late 1960s and early 1970s, a creation from the height of Pierre Cardin’s career is a bubble cape that combines revolutionary materials and shapes. The new ‘Wet Look’ plastic with a circular and voluminous shape straight from the space age hides the body shape of the woman who wears it completely (estimate £4000-6000). In addition to a representative selection of women’s day and evening wear, the auction includes rare examples of Cardin’s futuristic 1960s range of menswear.

By the late 1960s, the psychedelic revolutions of Britain and America had reawakened an interest in the historicism of the Art Nouveau and Deco periods. A new generation of British designers, to include Zandra Rhodes, and Ossie Clark together with his partner Celia Birtwell were able to reinterpret the delicate floral patterns and sensuality of the 1930s, infuse it with the earthy, autumnal shades of 1970s London, to reassert femininity as the defining aspect of modern fashion, as shown in the Ossie Clark and Celia Birtwell ensemble of blue silk crepe de chine (estimate: £800-1,500) and in Zandra Rhodes' iconic swinging yellow cape with 'Indian Feather' print (estimate: £2,000-4,000).

The review of historical styles led to an altogether new direction in British fashion - the Vivienne Westwood / Malcolm MacClaren King’s Road London boutique ‘Let it Rock’, later ‘Sex’, and finally ‘Seditionaries’. Originally inspired by rebellious 1950s youth style, the partnership soon began to produce radical, subversive clothing that was deliberately torn, defaced, and reassembled to suggest political ambivalence and youthful disenchantment. The improvised, ready-made, Dada-ist vision of the 1970s Punk movement placed youth and contemporary society at the sharp point of the Avante Garde. Illustrating this singular and distinctive anti-style, is a near-complete selection of punk shirts and accessories, some worn by the leading musicians of the punk music scene such as the lead singer of the New York Dolls. The fusion between rock style and fashion is elsewhere illustrated by two unique custom stage garments designed for the musician Sly Stone, including a studded black-leather bell-sleeved jacket worn on the cover on Stone’s 1973 album ‘Fresh’, (estimate: £2,000-4,000).

The mid-1980s heralded the tailored architectural minimalism of a new international movement that included Norma Kamali, Azzedine Alaia, Issey Miyake, Claude Montana and Gianni Versace. Defined by structure, order, new stretch fabrics and a bold palette, the fashion of the Avant Garde created forms that once again mirrored the cultural Zeitgeist. Leading examples include a hooded jersey minidress by Azzedine Alaia from the mid 1980s, made famous by the actress and model Grace Jones (estimate: £500-1,000), a unique series of spectacular catwalk garments by Norma Kamali, to include a dramatic strapless evening dress with distinctive wings rendered in New York Times print (estimate: £600-1,000 ), and scarce examples of Gianni Versace’s bondage garments of the early 1990s, including a rare gold leather evening dress (estimate: £1,000-2,000).

The collection features numerous striking and rare examples of jewellery, with estimates from £500 upwards, and will include a rare and important chromed metal and acrylic collar and pendant by Pierre Cardin, circa 1970 (estimate: £1,500-2,500).