NEW YORK.- One longstanding misperception about The Frick Collection is the notion that works of art cannot be moved around by its present-day staff. Fortunately, this is not true. The flexibility with which the curators may juxtapose in fresh ways Frick-owned works within the mansion is the cornerstone of its thriving program of critically acclaimed special exhibitions, large and small. However, one gallery in particular, the Living Hall, has seen very few changes—even temporarily—since Mr. Frick moved into the mansion ninety-three years ago. Most of the paintings he installed there in 1915, among masterpieces by Bellini, Holbein, Titian, and El Greco, have seldom—if ever—left the room or been presented to the public in any other manner. As such, the Living Hall always offered visitors the closest representation of the mansion and display of art during the family’s period of residence.

For just two weeks in August, while the Living Hall is briefly closed for refurbishing, the Frick’s curatorial team will take the opportunity to install six of the museum’s most beloved paintings in the Oval Room, where they will be seen in a fresh context and in dramatically different lighting. As was the case last summer when the principal panels of Fragonard’s great masterpiece, the Pursuit of Love, were moved to the East Gallery during another refurbishment project, this temporary change is expected to attract fresh interest in paintings greatly enjoyed by visitors. Giovanni Bellini’s magnificent landscape St. Francis in the Desert, painted about 1480, will hang on the center back wall of the Oval Room. The Bellini will be framed by two works by Titian, his Portrait of a Man in a Red Cap, of about 1516, and Pietro Aretino, painted several decades later. On the opposite wall visitors will find two captivating portraits by Hans Holbein the Younger, Sir Thomas More of 1527 and Thomas Cromwell, as well as El Greco’s St. Jerome.

Comments Director Anne Poulet, “One of the wonderful constants about the Frick is the character of display in the Living Hall, which is faithfully evocative of its original appearance. Some of our greatest holdings are in the room, and we are eager to maintain the original high quality of display, so we are very pleased to embark on a brief, much needed refurbishment of that gallery. Conservator Joseph Godla will supervise the project, which involves a treatment of the elaborate early eighteenth-century-inspired wood paneling, as well as maintenance of the floors and installation of a new carpet which replicates one now decades old and threadbare. In the meantime, we are very pleased to have the opportunity to examine, rephotograph, and temporarily alter the display of these great treasures.” The Education Department’s new Head, Rika Burnham, is eager to embrace the event as well; she is planning a pair of Sunday afternoon gallery conversations in the Oval Room on August 17 and 24. For further information about these and other education programs, visit frick.org or email education@frick.org. BELLINI’S ENIGMATIC MASTERPIECE
One of the paintings most eagerly and immediately sought out by visitors arriving at The Frick Collection is Giovanni Bellini’s St. Francis in the Desert. The work is considered by many to be the artist’s masterpiece, the finest work in the institution, and the greatest Renaissance painting in America. It is also believed to have been one of the paintings most admired by Henry Clay Frick, who purchased it in 1915 and had it installed centrally in the Living Hall. Since its arrival at the Frick, art historians have been fascinated by its beauty and its mysterious subject matter. One interpretation is the notion that it shows St. Francis of Assisi transfixed as he receives the stigmata, a subject frequently represented in the fifteenth century. This view has, however, been questioned for a variety of reasons, including the fact that the Frick painting appears to be missing several elements traditionally employed in depicting that moment in the life of this saint. The panel has also been described as showing St. Francis in Ecstasy and St. Francis’s Hymn to the Sun. Forthcoming research promises to provide further illumination, but for now the painting remains a very moving focal point of the Collection. Indeed, Bellini’s work is arresting to all who cast their eyes across the marvelously rich setting in which he placed the main figure. Francis is surrounded by animals, plants, and rock formations—elements that reflect imagery of early Franciscan literature. It is perhaps the sense of significance in all things as well as the radiant light flowing over his landscape that imbues the enigmatic and moving painting with such magical appeal TITIAN: PORTRAITS OF YOUTH AND POWER
On either side of St. Francis in the Desert, Henry Clay Frick chose to hang male portraits by Titian, who studied under Bellini and whom he succeeded as painter to the Republic of Venice. Portrait of a Man in a Red Cap, c. 1516, is generally considered an early work by the artist. The contemplative mood of the subject and the diffused, gentle play of light over broadly painted surfaces are strongly reminiscent of Titian’s Venetian contemporary Giorgione, to whom the canvas has in the past been attributed. There couldn’t be a stronger contrast between this dreamy-eyed youth and the portrait of Pietro Aretino, who was an extraordinary figure—author of lives of the saints, writer of innumerable letters and lascivious verse, literary blackmailer, knighted by popes. Aretino’s friends and patrons included many of the most prominent figures of his day—among them Titian, who painted at least three portraits of him. The artist conveys his friend’s intellectual power through the keen, forceful head and his worldliness through the solid weighty mass of the sumptuously robed figure. FACE TO FACE: HOLBEIN’S PORTRAITS OF TWO GREAT ADVERSARIES
Mr. Frick took great pleasure in uniting pairs of portraits, and two that are often viewed and discussed together because of the historical connections between the sitters are those of Thomas More and his mortal enemy, Thomas Cromwell. Frick had their portraits installed in 1915 in the Living Hall face to face, the interval between them charged with a tension that binds them irrevocably. Hans Holbein came to London from Switzerland in 1526, only a year before he painted the portrait of Thomas More. Bearing a letter of introduction from the philosopher Erasmus, Holbein managed to enter the rarefied circle of Sir Thomas More and was soon living near him in Chelsea. More, in a letter back to Erasmus, spoke of Holbein as “a wonderful artist.” More, famed as a humanist scholar and author of Utopia, was a powerful statesman as well. By this time, he had already served Henry VIII as Privy Councilor for over a decade and became his Lord Chancellor in 1529. More subsequently refused to subscribe to the Act of Supremacy, which made the king into the head of the Church of England, and for this, he was convicted of high treason and beheaded on July 6, 1535. As an evocation of one man’s mind and character, this portrait has few equals. For its demonstration of Holbein’s bravura illusionism—consider the stubble of the beard, or the irresistible feel of the velvet sleeves—it is one of the most beloved and spellbinding works at the Frick, stopping visitors in their tracks without fail. Thomas Cromwell rose from a lowly background and went on to the highest administrative posts in the court of Henry VIII.

Unlike More, Cromwell supported the Act of Supremacy; as chief architect of the English Reformation, he ruthlessly persecuted those who did not adhere to the new state religion. Like More, he eventually fell from favor, and in 1540, only five years after More’s execution, Cromwell met a similar fate. The cooler tones and simpler background of the Cromwell portrait are characteristic of the style of Holbein’s second period in England. Once thought to be a copy of a lost original, this painting is now accepted as an autograph work. 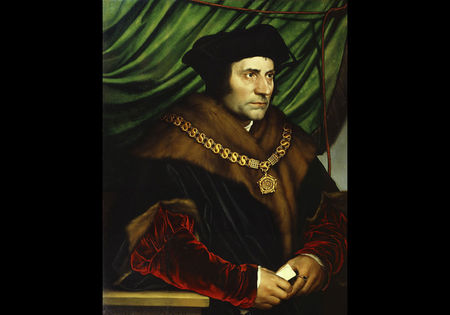 FRICK COLLECTS AT THE START OF AN EL GRECO REVIVAL
Of the paintings moving in August to the Oval Room, El Greco’s St. Jerome is the only work that the public has had the chance to view in a different context and lighting. Seven years ago, it was featured in the critically acclaimed Frick exhibition El Greco: Theme and Variations, which explored the artist’s evolution over several decades and also highlighted his re-use of certain subject matter over a long period of time during an era when few artists did so. Indeed, the Frick’s version of St. Jerome is the earliest of several that El Greco painted and the only one that bears his signature. The figure is depicted in a half-length format, wearing a brilliant orange-red robe, resting his hands on an open book, which probably represents the Vulgate, his translation of the Bible from Greek to Latin. St. Jerome greets the viewer with a piercing stare, but his focus seems inwardly turned, and his lips appear to move as he follows the notes in the margin of the text with his slender right hand. Apart from the run of the 2001 exhibition, the painting has hung without interruption since Henry Clay Frick had it installed in the Living Hall, inset into a custom frame created as part of the wall paneling over the fireplace. Mr. Frick’s interest in El Greco is notable, as it perhaps followed the influential footsteps Henry Walters and Horace O. and Louisine Havemeyer, neighbors who were at the center of the El Greco revival in the United States just after the turn of the century. With the 1905 acquisition of St. Jerome, Frick brought to this country only the fifth work by this artist. This was considered a bold move, and he subsequently repeated it twice more with the 1909 purchase of Purification of Temple (which he also gave pride of place, above the mantel in his private study) and the portrait Vincenzo Anastagi in 1913.