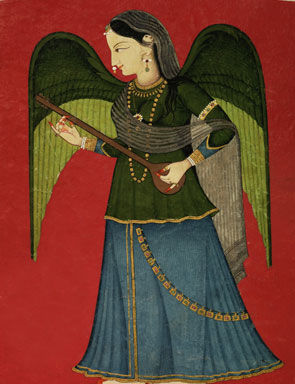 NEW YORK.- Sotheby’s New York will present its sale of Indian and Southeast Asian Works of Art on September 19, 2008, featuring an extraordinary selection of fine Indian Miniatures, and a broad offering of precious objects from the region, some extremely rare and all with impeccable provenance, many rarely available at auction. The sale includes 118 lots, estimated to sell for $2.3/3.2 million. The works from the sale will be on exhibit beginning September 12th.

The selection of exceptional Indian Miniatures comprise 48 lots, many sourced from four major private collections. Works of such importance and quality have not appeared on the market since Sotheby’s offered the Paul Walter and Gloria Kat and Willard Huyck collections in 2002. One of the highlights is the cover lot, an opaque watercolor heightened with gold on paper, A Celestial Figure, India, Guler, circa 1780 (est. $20/30,000). The inspiration for this elegant celestial is possibly the Western Asiatic Winged Victory figure, which had its roots in ancient Graeco-Roman imagery from where it was transmitted into Christian art. Winged angels were particularly popular in European paintings, some of which made their way into the Mughal court and were widely admired. With the decline of the Mughal Empire in the 18th century, artists migrated to the Pahari courts, bringing with them the techniques and skills of the Mughal atelier. The present illustration was no doubt executed by an artist trained in the Mughal idiom, and epitomizes the ideal of Pahari beauty.  (photo above) An Illustration from the Gita Govinda: Krishna and Radha in a Bower, India, Kangra or Guler, circa 1780. Opaque watercolor heightened with gold on paper. Est. $200/300,000 USD. Photo: Courtesy Sotheby's

Leading the Miniature section as its top lot is an extremely fine, museum-quality, published illustration from The Gita Govinda, Krishna and Radha In A Bower (est. $200/300,000). The Gita Govinda (Song of the Dark Lord), composed by the 12th century poet Jayadeva, is an evocative description of the courtship and love between Krishna and his paramour Radha. An inscription on the verso, from the twelfth canto of the poem, describes the passionate union between the couple as they lie on a bed of leaves, under a flowering tree. Composed as an homage to Krishna, incarnation of Vishnu the Supreme Being, the poem is meant to serve as an allegory for the soul’s longing to unite with the Divine. The Gita Govinda paintings are remarkable for the delicacy and perfection with which they are rendered. As Ananda Coomaraswamy has noted (in B.N. Goswami and E. Fischer’s Pahari Masters), “This magic world is not unreal or fanciful, but a world of imagination and eternity, visible to all who do not refuse to see with the transfiguring eyes of love.” The loving pictorial rendition of Jayadeva’s verse as evidenced in the present illustration certainly bears out the truth of this observation. The largest group of these paintings was formerly in the collection of Maharaja Manvindra Shah of Tehri-Garwhal, and it has been suggested that the album, originally comprising over 140 paintings, was executed by a first generation artist after the great masters Nainsukh and Manaku. 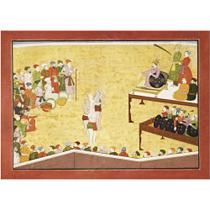 Another extraordinary offering comes from a private English collection, and is notable as one of the very rare instances where the artist can be identified. An Illustration From the Bhagavata Purana: Kamsa Summons the Wrestlers Chanura, Mustika and Sala (est. $30/40,000) appears to be by the hand of an artist belonging to the first generation after the master painter Manaku of Guler – Fattu, Manaku’s eldest son. Three of the five works offered from this collection, including the present lot, are inscribed ‘from the Tenth Chapter of the Bhagavata Purana’ in Devanagari characters on the verso, proving beyond doubt that they are from this series, long attributed to Fattu. Identifiable works such as these, in such pristine condition, are usually found in museums, and are rarely, if ever, seen at auction. Featured in the Works of Art section of the sale is a highly unusual offering from the sculptor Herbert Haseltine, a model of the monument to Jam Shri Rawalji (est. $120/180,000). While studying painting in Paris in 1905, Haseltine’s teacher, Aimé Morot, inspired him to try sculpting, and told him, according to his diary: “Some day you will go to India, where you will get your greatest inspiration.” That prediction came to fruition with the present work, after a career of sculpting a variety of animals, most notably horses (Haseltine’s best known sculpture is the 1934 life-size statue of the thoroughbred race horse Man O’War at the Kentucky Horse Park in Lexington, KY). He was approached by the Maharajah Jamsaheb of Nawanagar in the early 20th century about the possibility of making an equestrian statue of his ancestor, Jam Shri Rawalji, who was Nawanagar’s greatest ruler and hero, founding the state in 1531 (Nawanagar is the present day Jamnagar). After making studies for the statue for six years, Haseltine completed the sculpture in just thirty days, carving it out of an immense block of plaster, having it bronze cast in Brussels and shipped to India in time for the unveiling to coincide with the 25th anniversary of the reign of Maharajah Jamsaheb in early 1933. A highlight of the sale is a rare figure of a four-armed Male Deity, probably Vishnu, from the 9th Century (est. $220/250,000). His tall, tiered crown sits high on his head behind a jeweled diadem, otherwise he is unadorned, his body generously proportioned, visualizing the concept of the body as container of the prana (sacred breath)—the diaphragm expansion is almost visible here. Bakong, the great stepped-pyramid temple and mausoleum, gives its name to the style of sculpture from this period. It is noted for being iconic and heavily proportioned with a strong sense of authority conveying the ideas of universal kingship just beginning to be prevalent in Southeast Asia. There are few examples of almost complete Bakong sculptures such as this, where the drapery and the headdress are in such good condition. Also featured is an andesite Head of Buddha, Central Java, 9th century (est. $200/300,000). The full, round face of the Buddha is depicted in serene meditation, the eyes half-closed, the cheeks rounded, his chin clearly defined and with the lips denoted in the usual manner of the thin top lip and fuller bottom lip forming an almost indiscernible smile. In 8th and 9th century Java, fabulous and highly accomplished monuments were being built that strongly suggested an indepth knowledge of Indian iconography and ideas. During this time exchanges are documented between learning centers in Indonesia and scholars in Nalanda, and certainly bronze sculpture from this era indicates the transference of styles and ideas. This beautiful example has the grace and serenity associated with Buddhist images of this period.

Also on offer is a gild copper Manjusri set with semi-precious stones, Nepal, 14th century (est. $60/80,000), a finely cast and gilded figure of the Lord of Wisdom. Another highlight is an unadorned copper Maitreya in ascetic form, Northeast Thailand, Prakhon Chai, Buriram Province from the late 7th/early 8th century (est. $40/60,000). This figure is from the famous so-called Prakhon Chai hoard of bronze sculptures, depicting predominantly Buddhist figures, found accidentally by villagers in 1964 in a province in Northeast Thailand. Research completed by Jean Boisselier in 1967 dated the bronzes from between the seventh and the ninth century, and subsequently scholars have studied the stylistic evolution of the Prakhon Chai bronzes, comparing them to the body of work from surrounding areas and endeavoring to fit them into an existing framework. This work shows the simple grace and relaxed pose associated with these bronze figures. The high tin content gives a silver appearance to the metal, creating a luminescence, and the downcast eyes create a sense of piety.. www.sothebys.com