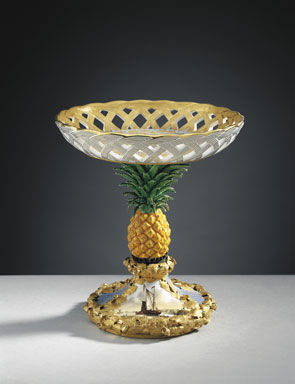 LONDON.- For the first time ever and for this summer only, visitors to Buckingham Palace will experience the spectacle of the Ballroom set up for a State Banquet. Held in honour of a visiting Head of State, the State Banquet is the occasion when The Queen entertains around 170 guests on the first evening of a State Visit. During Her Majesty’s reign, seventy-seven State Banquets have been held at Buckingham Palace, eighteen at Windsor Castle and two at the Palace of Holyroodhouse in Edinburgh. The State Banquet at Windsor for the President of the French Republic and Madame Nicolas Sarkozy on 26 March was the 97th hosted by The Queen since her accession in 1952.

At this year’s Summer Opening of Buckingham Palace, the horseshoe-shaped table traditionally used at State Banquets will be set with dazzling silver-gilt from the Grand Service and adorned with magnificent flower arrangements. Lavish displays of tureens, dishes, ornamental cups and fine English and Continental porcelain will flank the table. Film footage will show the behind-the-scenes work of Royal Household staff, including chefs, footmen, pages, florists and housemaids, who ensure the highest standards of presentation and delivery.

Sumptuous banquets have always been an integral part of royal ceremonies and the traditional way to mark significant occasions, although the style of dining has changed considerably over the last two centuries.

In the field of entertaining, as in so many others, no monarch has rivalled George IV. In 1811, when he became Prince Regent, he famously gave a supper for 3,000 people at his private residence, Carlton House. The single dining table, which extended the entire length of the building, incorporated a stream with live goldfish. Water issued from a fountain at the head of the table and fell through a succession of cascades into a circular lake surrounded by architectural features. While the displays and menus for State Banquets are now considerably more restrained – guests are typically served one choice for each of the four courses – George IV’s spectacular gilt tableware is still used.

The form of today’s State Banquet largely dates from the reign of Queen Victoria, who introduced the ceremony of the royal procession before the meal. Guests are first received by The Queen and the visiting Head of State in the Palace’s Music Room and proceed to the Ballroom. The royal procession, led by The Queen and the Head of State, then makes its way to the Banquet, preceded by the Lord Chamberlain and the Lord Steward. Before dinner is served, The Queen proposes the health of her guest, who replies and proposes The Queen’s health. During dinner, a programme of music is played by a military orchestra in the gallery, and at the end of the Banquet pipers process around the room. The Queen and the visiting Head of State leave through the West Gallery, and guests move to the State Dining Room and the Blue Drawing Room for coffee.

The arrangements for a State Visit are largely the responsibility of two departments of the Royal Household. The Lord Chamberlain’s Office, under the Comptroller, delivers all the ceremonial aspects of the visit, while the Master’s department manages the entertaining and food preparation. The planning process for the Banquet begins six months before the Visit. The guest list includes the Royal Family, the Guest of Honour and Suite (senior members of their household and government), members of the Cabinet, the Archbishop of Canterbury, the Speaker of the House of Commons, leaders of the main political parties, the diplomatic corps, the Governor of the Bank of England, special guests relating to the visiting country, and members of the Royal Household.

Once the list is approved by The Queen, invitations are ideally sent out 12 weeks in advance of the occasion. An event of this scale requires a great deal of attention to detail. There are nearly 1,000 glasses to polish, around 170 linen napkins to fold and over 20 flower displays to arrange. The tables are laid up with great precision using rulers with the specific measurements for the placing of guests and for the position of glasses and cutlery. Her Majesty takes a close interest in all aspects of the planning, and approves the choice of menu and the seating arrangements, and always makes the final check of the table.

The magnificent dining silver-gilt used at a State Banquet is from the Grand Service, originally made for George IV when Prince of Wales. It was first used to celebrate the 73rd birthday of his father, George III, in 1811. As king, George IV continued to add to the service throughout his life, and by his death it included more than 4,000 pieces. Today the Grand Service forms the core of the royal silver and encompasses the best examples of 19th-century design, drawing on Egyptian, Greek, Roman and medieval sources. The dining plate is dominated by the monumental Mercury and Bacchus and Apples of the Hesperides candelabra, which stand over a metre tall. Made by the master goldsmith Paul Storr and designed by the sculptor John Flaxman, they are always placed on the table opposite Her Majesty The Queen and the visiting Head of State. 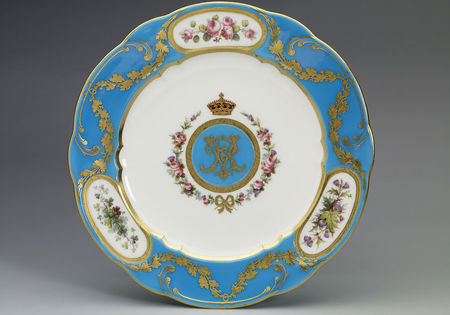