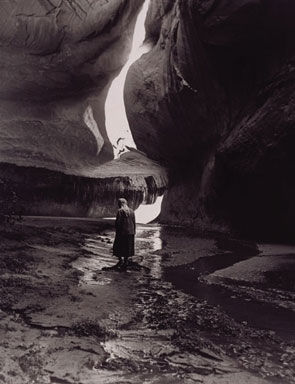 WASHINGTON.- “Georgia O’Keeffe and Ansel Adams: Natural Affinities,” on view at the Smithsonian American Art Museum Sept. 26 through Jan. 4, 2009, examines the friendship of two iconic artists who were attracted to the distinct landscapes of the American southwest and far west and committed to depicting its essence with modernist sensibilities. This exhibition, the first to pair these artists, celebrates their mutual appreciation of the natural world and reveals the visual connections between O’Keeffe’s paintings and Adams’ photographs.

“Natural Affinities” includes 43 paintings by O’Keeffe from public and private collections and 54 photographs by Adams from the Center for Creative Photography in Tucson, Ariz., which holds the largest single collection of Adams’ work.

“This exhibition brings together two giant figures in 20th-century American art who portrayed the grandeur of the American west,” said Elizabeth Broun, The Margaret and Terry Stent Director at the Smithsonian American Art Museum. “Georgia O’Keeffe and Ansel Adams, like many of our great artists, drew inspiration from the distinctive natural landscape of the west. The Smithsonian American Art Museum is delighted to be a venue for this exhibition that takes a new look at these celebrated artists.”

Georgia O’Keeffe (1887-1986) and Ansel Adams (1902-1984) met in Taos, N.M., in 1929 at the home of a mutual friend, Mabel Dodge Luhan. The two immediately became friends. The following year, they met again in New Mexico. Adams was there making photographs for his first book, “Taos Pueblo” published in 1930, and O’Keeffe was spending the first of many summers painting in New Mexico, which she made her permanent home in 1949.

In 1933, Adams traveled from California to New York for the first time and met O’Keeffe’s husband, Alfred Stieglitz, the influential photographer whose modern art galleries in New York City launched the careers of numerous American artists. Stieglitz presented an exhibition of Adams’ photographs in 1936 at his gallery, An American Place, which established the younger photographer as one of America’s leading modernists.

In 1937, O’Keeffe and Adams toured the southwest by car with a group of friends, visiting well-known archaeological sites including Canyon de Chelly. The following year, O’Keeffe visited Adams in Yosemite. Although their friendship lapsed in the 1940s as they pursued separate interests, the artists resumed regular correspondence in the 1950s. The artists last visited in person in 1981 when O’Keeffe, then 94, went to see Adams in Carmel, Calif., and Adams, then 79, visited O’Keeffe at her home in Abiquiu, N.M.

The paintings and photographs included in “Natural Affinities” explore the formal connections between O’Keeffe’s and Adams’ works. The artists often emphasized their subjects’ essential qualities, creating abstract images. For example, in O’Keeffe’s “Abstraction White Rose” (1927) and in Adams’ “Foam, Merced River, Yosemite Valley, California” (1951), they depict their subjects extremely close-up so that any sense of the subject is lost to abstraction. This also is evident in O’Keeffe’s “The Black Iris” (1926) and Adams’ “Leaves, Frost, Stump, October Morning, Yosemite National Park” (c. 1931). O’Keeffe and Adams also frequently called attention to the abstract components of the southwestern landscape as can be seen in O’Keeffe’s “Black Hills with Cedar” (1942) and Adams’ “Ghost Ranch Hills, Chama Valley, Northern New Mexico” (1937).

Occasionally, comparisons between works by O’Keeffe and Adams highlight their different approaches to the same subject, such as an adobe church near Taos. In O’Keeffe’s “Ranchos Church No. 1” (1929), the building becomes organic and seems to rise almost weightlessly from an expansive foreground. In contrast, Adams underscores its monolithic solidity in his photograph “Saint Francis Church, Ranchos de Taos, New Mexico” (c. 1929).

“What is fascinating about this exhibition is the opportunity to see how two very different artists, with equally strong personalities, approached the same subjects,” said Harvey. “In O’Keeffe’s paintings and Adams’ photographs, each artist captures a similar reverence for the American landscape. Yet in each artist’s work we see evidence of their independent spirits.”