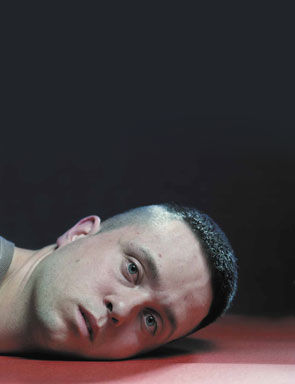 ST. PAUL.- Powerful portraits of American soldiers between tours of duty in Iraq and Afghanistan were scheduled to be displayed on billboards in downtown St. Paul next week, but the billboard company has abruptly canceled the contract on the eve of the Republican National Convention.

The intimate images of soldiers' faces by New York-based photographer Suzanne Opton are part of a series called "Soldier Billboard Project." The photos were taken in 2004 and 2005 at Fort Drum in upstate New York, with the permission of the soldiers and their commanders. The images are included in the permanent collections of the Brooklyn Museum, The Cleveland Museum of Art, the Library of Congress and The Museum of Fine Arts, Houston, and have been widely exhibited in the U.S. and Europe. In addition, Opton's work has appeared in Fortune and Newsweek. The Billboard Project is sponsored by the New York Foundation for the Arts (NYFA).

The billboard company, CBS Outdoor, said its decision was based on "how the image would be perceived by a motorist passing it in transit." In an email to Opton this week, CBS Outdoor Executive Vice President of Marketing Jodi Senese wrote, "The reason we have advised you that we cannot post these as billboards is that out-of-context (neither in a museum setting or website) the images, as stand-alone highway or city billboards, appear to be deceased soldiers. The presentation in this manner could be perceived as being disrespectful to the men and women in our armed forces."

All of the soldiers are very much alive. Far from being disrespectful, the images are vivid reminders of the hundreds of thousands of soldiers serving the country. The series simply shows them in a more vulnerable pose than the public is accustomed.

Describing the project, Opton said, "My son and his friends would have been of draft age had there been a draft, though none of them volunteered for military service. Since the war began, I wondered about the young men and women who opted to serve and put their lives on the line. I wondered about what they would experience at war and how they would manage their transition to civilian life. In making these portraits I wanted to look into the face of a young person who had seen something unforgettable. And I wanted to make that a serious and intimate view, the way I would look at my own son."

Upon learning this week that the billboard contract had been canceled, the mother of one of the men who was photographed said, "Viewing these portraits of soldiers causes one to pause and think of the many sacrifices and efforts these men and women have experienced to protect us and defend this great country. The portraits are a stark reminder of the reality of it all." Gayanne Birkholz added, "For me, looking at their faces serves also as a reminder to remember our service men and women and to thank them for all they do and have done. I am disappointed that the billboards have been canceled, and strongly hope the company will reconsider."

"Soldier Billboard Project" was launched earlier this month in Denver, where an image of a solider who served for 120 days in Afghanistan is on view at Lincoln Street between 19th and 20th Avenue. That location, also controlled by CBS Outdoor, was made possible through a partnership with the Denver Museum of Contemporary Art. Opton originally lined up partners in four additional locations: Minneapolis/St. Paul (Forecast Public Art), Houston (DiverseWorks ArtSpace), Atlanta (Atlanta Contemporary Art Center) and Miami.

"We have every intention of moving forward with our plans," said Susan Reynolds, curator of the Billboard Project. "Barring these images from billboards in the Twin Cities, or any city for that matter, not only deprives the public of seeing these beautiful portraits, but it is an insult to the young soldiers who posed for these pictures."

The nine images that make up "Soldier Billboard Project" are on view at http://www.soldiersface.com.