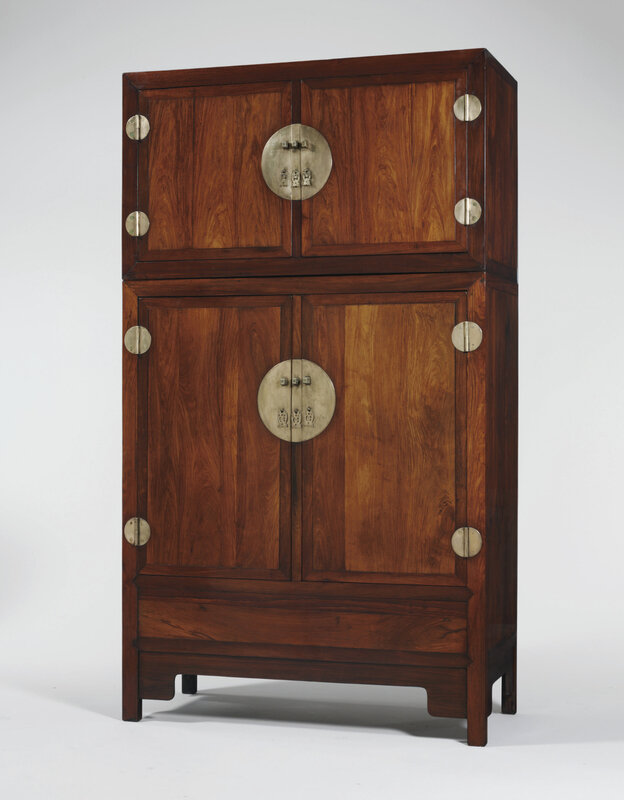 Of massive rectangular form and beautiful graining, the frame composed of huanghuali veneer over solid huanghuali, the hat chest with two huanghuali square-panel doors fitted flush around a removable center stile, above the large cabinet with rectangular huanghuali panel doors similarly fitted and with removable ceuinter stile, the doors opening to reveal the shelved interior and two drawers, the front with a horizontal panel above a plain apron, the cabinet and hat chest with brass hardware and double-fish-shaped pulls.

Note: Known as sijiangui, 'four-part wardrobes', these compound cabinets were often made in pairs. Garments and large items would have been stored in the lower cabinets, while smaller items would have been kept in the top chests, often requiring the use of a ladder due to their massive size.

Compare a pair of 17th century huanghuali compound cabinets of similar form but with elaborate hardware and carved aprons formerly in the Museum of Classical Chinese Furniture, sold in these rooms, 19 September 1996, lot 30. For another similar pair in huanghuali with plain aprons, dated to the late Ming dynasty, see R. H. Ellsworth et. al., Chinese Furniture: One Hundred Examples from the Mimi and Raymond Hung Collection, vol. I, New York, 1996, p. 189, no. 73.