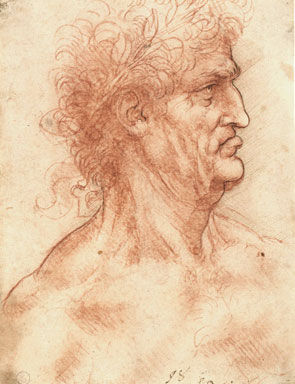 BIRMINGHAM, Al.- The Birmingham Museum of Art opened one of the most significant groups of drawings by Leonardo da Vinci will is loaned to a U.S. museum for the first time by the Biblioteca Reale (Royal Library) in Turin, Italy. Organized by the Birmingham Museum of Art, the exhibition Leonardo da Vinci: Drawings from the Biblioteca Reale in Turin, will run through November 9, 2008 in Birmingham. The works encompass one of Leonardo’s most celebrated notebooks, the Codex on the Flight of Birds, and 11 important drawings, including one described by Bernard Berenson as the “most beautiful drawing in the world.” The drawings have never before traveled as a group nor in their entirety been made available outside of Italy.

This exhibition provides a rare glimpse into the mind of the greatest draftsman of all time, whose designs still fascinate and challenge us today. Often called “the universal genius,” Leonardo is recognized for his restless, inventive mind, and the drawings in Turin illustrate in microcosm the extensive range of his interests.

“It is a tremendous honor to be the first museum to present these drawings as a group to the United States,” says Gail Andrews, Director of the Birmingham Museum of Art. “We are deeply grateful to the Biblioteca Reale and to the Foundation for Italian Art & Culture for facilitating this initiative. The Birmingham Museum of Art is committed to bringing to our community objects of global significance that broaden appreciation for artistic endeavor, our understanding of the world and ourselves. These drawings by Leonardo da Vinci offer an unparalleled opportunity for careful observation and insight into the mind of a master.”

The drawings are acute observations, fantastical explorations, anatomical studies, and utilitarian working drawings; one sheet includes a fragment of a poem. They are executed in a variety of media, including red chalk, black chalk, metalpoint, and pen and ink—some on red, blue, and green prepared paper. Dating from about 1480 to 1510, the works traverse the most fertile period of Leonardo’s career.

Exhibition Highlights: “Most Beautiful Drawing in the World”
Among the most celebrated of the Turin sheets is the preparatory sketch of the angel for the first version of the Madonna of the Rocks (ca. 1483), originally intended for a chapel altarpiece in the church of San Francesco Grande in Milan. Its powerful and expressive silverpoint parallel hatching led art critic and connoisseur Bernard Berenson (1865-1959) to describe it as the “most beautiful drawing in the world.” Rarely displayed to the public, the sketch made international news in 2003 when it was displayed for two hours outside of its protective case.

A sheet of figural sketches from ca. 1505/06 is associated with several of Leonardo’s projects, above all, the Battle of Anghiari. Leonardo’s most celebrated commission, his unfinished mural painting for the assembly room of the Palazzo Vecchio in Florence, was pitted in competition with Michelangelo’s battle scene on the opposite wall. The sheet in Turin is one of several made in preparation for the painting. In addition to two figures seen from the back, with carefully delineated musculature outlined and hatched in pen and ink, brief musings of hastily scrawled figures in action flit across the page. Other figures, unrelated to the Battle of Anghiari, also are sketched in. The Turin sheet reveals the variety of projects Leonardo would consider on a single page and is a prime example of his “thinking on paper” so often remarked upon.

Leonardo continually measured and mapped the world around him. He studied human anatomy with sketches of legs, the body in movement during battle, and proportion studies for the head and eyes on an extended sheet that includes notes and observations in his mirror writing. Three sheets from Turin are filled with equine studies, two in metalpoint and one in red chalk. They are probably in preparation for Leonardo’s planned monument of patron Francesco Sforza, which would have been the largest equestrian statue ever made. Leonardo’s desire to master the anatomy of a horse is found in each articulated detail of foreleg, shoulder, and flank. Drawings of insects, and even a minute sketch of a cloud of moths drawn to flames, reveal a glimpse into Leonardo’s investigations of the natural world.

The exhibition also features Leonardo’s Codice sul volo degli uccelli (Codex on the Flight of Birds) of 1505/6, which is contained in a bound notebook of 18 recto and verso sheets. It is filled with Leonardo’s observations on the movement of birds as well as ideas to reproduce these natural movements with a human-powered machine. His comments on flapping and gliding wings, equilibrium, and harnessing the power of wind and its currents are interspersed with sketches of birds, flowers, machines, architecture, turbulent rivers, and diagrams.

Leonardo’s ideas for flying machines from the mid-1480s concentrated on the power of the pilot to take off and stay aloft. After 20 years of studying aerodynamics, however, he came to realize that manpower alone would not make human flight possible. By focusing instead on the ability of birds to take advantage of the wind and the construction of their wings, Leonardo hoped to overcome the issues of weight and gravity.

Explanatory panels and a new didactic software program aid the visitor in penetrating Leonardo’s famed mirror writing and lateral thinking. The program allows visitors to virtually page through the Codex and animate the drawings.

Appreciation of Leonardo’s skills and intellect transcend time. “We are still learning from him,” says exhibition curator Jeannine O’Grody, PhD, Curator of European Art, Birmingham Museum of Art. “As few paintings have come down to us, the heart of his artistic legacy is in the works on paper. Leonardo’s famed powers of expression are found principally in his drawings, which provide a visual delight and intellectual astonishment that, if possible, have increased with time.”

The Biblioteca Reale
The Biblioteca Reale was established during the reign of Carlo Alberto of Savoy (r. 1831-1849). The House of Savoy, one of Europe’s oldest dynasties, has long collected the rare manuscripts, illuminated books, and exceptional book bindings that make up some of the Library’s 200,000 volumes today. Carlo Alberto not only ordered the construction of the Library to house the collection, but he also acquired a group of more than 2,000 drawings, including important examples by Michelangelo, Raphael, Poussin, Rembrandt, and Tiepolo. The Leonardo drawings, however, are undeniably the jewels of the prestigious collection. This nucleus of Leonardo drawings was enhanced in 1893, when a Russian collector donated the Codex on the Flight of Birds to King Umberto I of Savoy.

“Italians consider the Biblioteca Reale’s Leonardo drawings among their most important cultural patrimony, yet access to the drawings in the library is extremely limited,” O’Grody says.

In conjunction with the exhibition, the Birmingham Museum of Art will present programs relating to Leonardo’s life and his contributions to the fields of art and science, and more broadly to the town of Turin, Italy, where this exhibition originated. These include a symposium of Leonardo scholars examining Leonardo as the ultimate Renaissance man; an Art of Flight Family Day for kids and their families to learn about the mechanisms of flight with the help of the U.S. Space and Rocket Center; exhibition lectures by the Museum’s Curator of European Art Jeannine O’Grody; a concert by the Alabama Symphony Orchestra; and a student exhibition of Leonardo-inspired designs. (Please refer to the Programs, Partnerships, and Events document for more details.) that will include music by Italian masters such as Antonio Vivaldi

After the exhibition closes in Birmingham, it will travel to the Fine Arts Museums of San Francisco, November 16, 2008 through January 4, 2009.