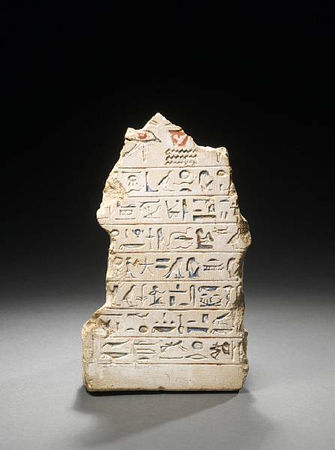 Preserving the lower half of a kneeling figure, wearing a long white ankle-length kilt with waist-band, the ankles, feet and belly painted reddish brown, supporting with hands, now missing, a frontal stela against his knees, in adoration of the sun, carved with hieroglyphs in sunken relief and filled with the remnants of blue, black and red pigment, in the rounded top section with the standard symbols of udjat eyes, one missing, flanking a pot with water lines beneath, the text below comprising seven lines of blue filled hieroglyphs of a well-known form of a hymn to the sun god, given by the statue's owner, an overseer of the workshop of Amun, his name ending with the element '-resu', 93/8in (23.8cm) high, 8¼in deep. Sold for £11,400 Provenance: Property of a private UK owner, inherited from her grandfather who was collecting in the 1940s.

Literature: Such statues first appear at Thebes in the 18th Dynasty and would have been inserted into a niche at the top of the façade of the owner's tomb chapel or even in the sharply pointed mud-brick pyramid which surmounted some tomb chapels, so that the tomb owner could appear adoring the rising sun. Cf. S. D'Auria et al., Mummies and Magic, (MFA Boston, 1988), p.148, no.89; and W.C. Hayes, The Scepter of Egypt, (Met 1959), p.160-1.