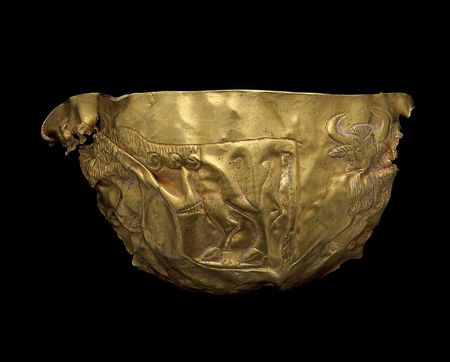 SAN FRANCISCO, CA.- Extraordinary artifacts uncovered in modern-day Afghanistan, long thought stolen or destroyed during some twenty-five years of conflict until the dramatic announcement of their existence in 2003, make their only West Coast appearance on their United States tour at the Asian Art Museum of San Francisco, October 24, 2008, through January 25, 2009. Revealing the multicultural heritage of Afghanistan—once the heart of the Silk Road linking cultures from Asia to the Mediterranean—are some 228 objects ranging in date from 2200 BCE to the second century CE. The artworks are mainly drawn from three archaeological sites, together with a few earlier works providing background. These artworks which belong to the National Museum, Kabul, include fragmentary gold bowls with artistic links to the cultures of ancient Mesopotamia (largely present-day Iraq) and the Indus valley (largely present-day Pakistan) from the Bronze Age site of Tepe Fullol; bronze and stone sculptures and a gilded silver plaque from the former Greek colony at Ai Khanum (“Lady Moon”); bronzes, ivories, and painted glassware that had been imported from Roman Egypt, China, and India, and excavated from ancient storerooms discovered in the 1930s and 1940s in Begram; and more than one hundred gold ornaments from the “Bactrian Hoard,” found in 1978 in Tillya Tepe, the site of six nomad graves, which reveal a synthesis of Greek, Roman, Persian, Indian, Chinese, and Siberian styles.

His Excellency Said Tayeb Jawad, Ambassador of Afghanistan to the United States: “Seven years ago, with the Taliban roaming our streets, none of us could have imagined that Afghanistan would be able to recover and celebrate its rich history. Today, Afghanistan is once again regaining its historic role in bridging cultures, countries, and civilizations. This exhibition presents a country of long history, rich heritage, breathtaking beauty, and dynamic trade and commerce. The treasures on display speak to Afghanistan’s ancient history and its present-day challenges while showcasing the sacrifices of our people to protect and preserve our heritage. I hope that my fellow Afghans in the Bay Area come see the exhibit and celebrate the future of hope that these recovered ancient artifacts represent.”

Terry Garcia, executive vice president for Mission Programs, National Geographic: “We are delighted to partner with the Asian Art Museum in bringing these rare and precious items to the city of San Francisco. Our goal is to introduce this unique collection of objects to a broad audience and raise awareness and understanding about the little-known ancient cultures of modern-day Afghanistan. We also want to tell the heroic story of the Afghans who risked their own safety to hide and protect these treasures.”

Jay Xu, director, Asian Art Museum of San Francisco: “As the only West Coast venue for this historic exhibition, the Asian Art Museum is pleased to bring the artistic and cultural achievements of ancient Afghanistan to the San Francisco Bay Area—home to the largest Afghan community in the United States. The museum welcomes those locally and from afar who wish to celebrate their heritage, and who wish to discover the unique material, aesthetic, and intellectual achievements of this vibrant and enduring culture.”

Bruce Cole, chairman, National Endowment for the Humanities: “The artifacts featured in this collection are more than dazzling exhibition pieces; they serve as primary documents recording the vitality of Afghanistan’s rich cultural heritage. The National Endowment for the Humanities is proud to have supported the preservation, cataloging, and exhibition of these treasures as part of our broader ‘Rediscovering Afghanistan’ initiative, and we are delighted to play a part in bringing this collection to citizens across our nation.”

Fredrik Hiebert, exhibition curator and National Geographic Archaeology Fellow: “This exhibition is the culmination of many years of work by the Afghans. Without their courage and commitment, these objects would not exist today. Having worked closely with Afghan officials since 2003 on the preservation and inventory of the objects, I am honored to be part of the effort to share these treasures with audiences in the United States and ultimately to enhance the understanding of Afghanistan’s rich cultural heritage.”

The exhibition begins in North Court with a brief introduction and a new map of modern Afghanistan created by National Geographic, which highlights the archaeological sites featured in the show. Specially commissioned maps will be on display throughout the exhibition.

Lee Gallery offers a further introduction by acting as a screening room for a 12-minute version of the documentary Afghanistan: Hidden Treasures from the National Museum, Kabul (National Geographic, 2008, 28 mins.) narrated by Khaled Hosseini, author of The Kite Runner and A Thousand Splendid Suns. It features footage of the 2004 recovery of the collections of the National Museum, Kabul, which had been hidden in the vaults of the Central Bank in the Presidential Palace by a group of selfless Afghan heroes.

Organized by archeological site, the exhibition artworks begin in the Hambrecht Gallery with a small number of objects from Tepe Fullol in northern Afghanistan. In 1966, farmers near the Afghan village of Fullol discovered the first evidence of a Bronze Age civilization in the region. Gold from the nearby Amu Darya riverbed most likely provided the gold for several bowls—part of a burial cache—found at the site, including a fragment of a bowl depicting bearded bulls dating from 2200 to 1900 BCE.

The main group of artifacts in Hambrecht Gallery comes from the site of the former Greek city of Ai Khanum in a region that had been conquered by Alexander the Great. These artifacts reflect the Mediterranean influence in the area between the fourth and second centuries BCE. The works include Corinthian capitals from before 145 BCE. A similar capital was shown to the late Afghan King Zahir Shah on a hunting expedition in the region in 1961, leading to the discovery of the site. Objects in this room also include bronze casts and limestone carvings representing Greek figures, as well as sundials, architectural ornaments, and vessels of the Greek style.

One of the oldest artifacts found is a ceremonial plaque made of gilded silver depicting Cybele, the Greek goddess of nature presiding within an orderly cosmos. There will be a digital reconstruction of the city of Aï Khanum as well as a site map.

Items of trade from the third site, at Begram, date from between the first and second centuries CE. Elaborately carved Indian ivory reliefs and figurines used as decorative elements on furniture will be digitally reconstructed and shown on a monitor in the gallery with a site map of Begram. A painted goblet depicting figures harvesting dates and a bronze mask of Silenus, a wine deity, are just a few of the artifacts discovered that shed light on the role of Afghanistan in the network of trade along the Silk Road. A portion of the Begram artifacts appear in the Hambrecht Gallery with the remainder showcased in the Osher Gallery.

The fourth group consists of some 100 gold objects dating from the first century BCE to the first century CE. On display in the Osher Gallery, these artworks were among those discovered in 1978 by a Soviet-Afghan team led by Viktor Sarianidi at Tillya Tepe in northern Afghanistan. The site contained jewelry and gold ornaments from the graves of six Central Asian nomadic people.. The graves contained thousands of gold objects sewn onto the burial shrouds and clothing of the deceased. On view will be an exquisite crown, as well as necklaces, belts, rings, and headdresses—most made of solid gold with insets of semiprecious stones such as turquoise and garnets. Many of the Bactrian objects reflect local artisans’ distinctive blend of motifs known from Greek, Roman, Indian, and Chinese art.

Afghanistan is free with general museum admission. However, due to the anticipated popularity of Afghanistan, we will be using a timed entry system for the exhibition. As such, museum admission tickets will be sold for specific dates and times during the run of the exhibition. Advance purchase of museum timed tickets is highly recommended. Tickets can be purchased online at www.asianart.org with a service charge of up to $2.25 per ticket. Tickets can be picked up at Will Call the day of the visit. Advance and day-of tickets are also available at the museum with no processing fee, subject to availability. Free admission on Target First Free Sundays is on a first-come, first-served basis. Due to capacity restrictions, admission is not guaranteed.

The Asian Art Museum is offering an audio guide of the exhibition for $3 with general admission, or $2 for Asian Art Museum members. Free docent tours of Afghanistan are scheduled for 10:30 am, 12:30 pm, and 1:30 pm. For more information please visit www.asianart.org

The documentary Afghanistan: Hidden Treasures from the National Museum, Kabul (National Geographic, 2008, 28 mins.) is narrated by Khaled Hosseini, author of The Kite Runner and A Thousand Splendid Suns. It features footage of the 2004 recovery of the collections of the National Museum, Kabul, which had been hidden in the vaults of the Central Bank in the Presidential Palace. The film also includes interviews with exhibition curator Fredrik Hiebert and National Museum director Omara Khan Massoudi. A version of the film will be shown in the exhibition. The 28-minute version of the National Geographic documentary will air locally on KQED on October 27 (check local public broadcast listings for further updates).

Web: On the Asian Art Museum website, a short trailer for the documentary film highlights the dramatic 2004 recovery of ancient objects hidden during the decades of turmoil in the country. The video is also available via Apple iTunes and YouTube.com. The museum website includes information on exhibition-related programs, press images and group visits and tours. Visit http://www.asianart.org/afghanistan.htm.

In addition to the short trailer, the National Geographic website provides video, maps, and six audio slideshows featuring historical and cultural information from many important archaeological and cultural sites in Afghanistan. Included are the Kabul Museum, Tillya Tepe, Bamiyan, Aï Khanum, and Begram, as well as other information about Silk Road cultures. Stories about how the artifacts in this exhibition were hidden for some 25 years—from just before the Soviet invasion in 1979, through the Afghan civil wars, and during Taliban rule—and contemporary stories about the country shed new light on this former heart of the Silk Road. Visit www.nationalgeographic.com/mission/afghanistan-treasures/.