LONDON.-From October 2008, the Royal Academy of Arts will host a ground-breaking exhibition devoted to Byzantium. Highlighting the splendours of the Byzantine Empire, the exhibition will comprise around 300 objects including icons, detached wall paintings, micro-mosaics, ivories, enamels plus gold and silver metalwork. Some of the works have never been displayed in public before. Byzantium 330–1453 will include great works from the San Marco Treasury in Venice and rare items from collections across Europe, the USA, Russia, Ukraine and Egypt. The exhibition begins with the foundation of Constantinople in 330 AD by the Roman Emperor Constantine the Great and concludes with the capture of the city by the Ottoman forces of Mehmed II in 1453. This will be the first major exhibition on Byzantine Art in the United Kingdom for 50 years.

This epic exhibition has been made possible through a collaboration between the Royal Academy of Arts and the Benaki Museum, Athens.

Byzantium 330–1453 will follow a chronological progression covering the range, power and longevity of the artistic production of the Byzantine Empire through a number of themed sections. In this way the exhibition will explore the origins of Byzantium; the rise of Constantinople; the threat of iconoclasm when emperors banned Christian figurative art; the post-iconoclast revival; the remarkable crescendo in the Middle Ages and the close connections between Byzantine and early Renaissance art in Italy in the 13th and early 14th centuries. Between 1204 and 1261, Constantinople was in the hands of the Latin Crusaders, but the return of the Byzantine Emperors to the city initiated a final period of great diversity in art. Art from Constantinople, the Balkans and Russia show the final phase of refinement of distinctively Orthodox forms and functions, while Crete artists like Angelos Akotantos signed their icons and merged Byzantine and Italian styles. Up to the end of the Byzantine Empire, with the fall of Constantinople to the Ottoman Turks in 1453, manuscripts, micro mosaics and metalwork demonstrates the virtuosity of its artists.

The exhibition will show the long history of Byzantine art and document the patrons and artists and the world in which they lived. Seeing themselves as the members of a Christian Roman Empire they believed that they represented the culmination of civilisation on earth. The art emits an intellectual, emotional and spiritual energy, yet is distinctive for the expression of passionate belief and high emotion within an art of moderation and restraint.

Byzantium 330-1453 will showcase the Antioch Chalice, 500–550AD, on loan from the Metropolitan Museum of Art, New York. After its discovery in c.1911, the silver gilt artefact was believed to have been the Holy Grail, the cup used by Christ at the Last Supper. Major works from the Treasury of San Marco, Venice have been loaned to the Royal Academy including the ornate Chalice of the Patriarchs, c. 10th–11th century. Other highlights include a two-sided icon of Virgin Hodegetria (obverse) and the Man of Sorrows (reverse), 12th century, from the Byzantine Museum, Kastoria, an impressive 10–11th century imperial ivory casket from Troyes cathedral depicting hunting scenes and riders and the Homilies of Monk James Kokkinobaphos, a manuscript from 1100–1150AD on loan from the Bibliothèque Nationale de France, Paris.

The exhibition will be accompanied by a magnificent catalogue illustrated with over 340 works and with contributions from more than 100 authors. In thirteen essays, leading authorities trace the history and cultural development of more than a thousand years of Byzantine art, revealing the splendours of the imperial city of Constantinople. 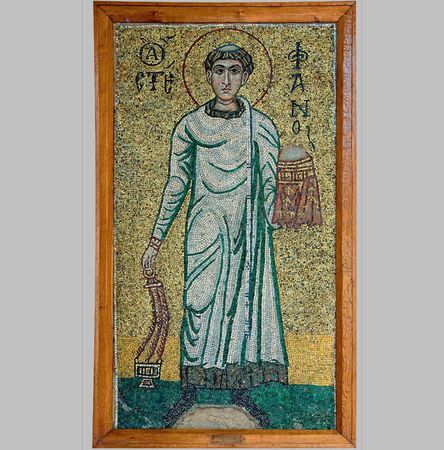