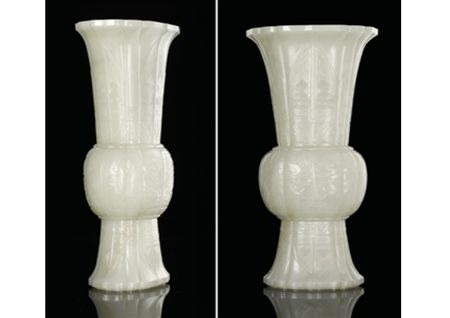 Of lobed form, carved around the exterior in medium and shallow relief with three registers of decoration, the spreading base and trumpet neck with elegant overlapping plantain leaves decorated with geometric archaistic motifs, the mid-section with elaborate taotie masks, the interior of the mouth rim enclosing a flat lower flange with a central aperture conforming to the shape of the vase, the well-polished stone of an even pale celadon tone with minor snowy inclusions. 10 in. (25.3 cm.) high, wood stand - Estimate: £180,000 - £220,000 ($291,240 - $355,960)

Notes: The present vase follows the archaic bronze prototype, gu, a type of wine vessel used in the rituals of the Shang and Zhou dynasties. However, the ingenious lapidary has softened the solemn outline of the ancient vessel with vertical lobes all the way around, making its appearance much more fanciful. To achieve this visual effect alone is difficult enough, but the craftsman did not stop there. He went further by adding an inner flange just below the interior mouth rim, and in doing so reduced the size of the opening of the mouth. This seemingly inconsequential design increased the difficulty of hollowing the vessel exponentially, and it is no mean feat that the lapidary managed to hollow the vessel so perfectly right down to the central knob of the vessel.

Jade gu vases in the Qing dynasty are often made separately of three sections - upper, middle and lower - and this is especially true of the larger examples, such as the present vase. This is because the shape of gu flares out at the ends, so it is difficult to find a piece of material large enough for this shape. Also, it is extremely time-consuming to hollow out the vase well, what with its very long neck tapering towards the middle, increasingly restricting the movement of the craftsman, who then had to contend with hollowing a central bulb. The present vase not only is made of a whole piece of top quality material, the extra flange in the interior mouth rim made it almost impossible to hollow the vase. It is perplexing as to why the jade carver went to such length to add this feature. It is unlikely that the vase was made with a cover, as gu vases were typically made without a cover, and even if they did, it is not necessary for the flange to be so wide in order to support the cover.

The answer to this question lies perhaps in the way in which gu vases were used. Zhang Chou (1577-1643) wrote in his Pinghua Pu (Manual of Vases and Flowers) in the sixteenth century:

Ancient bronze vases and vessels, after being long buried in the soil, are deeply affected by the energy of the earth. When using them for flower arrangements, the flowers' colours will be fresh and vibrant; they will blossom sooner and wilt later, and when they wilt they will start fruiting in the vase.

As a result, ancient bronze gu were very popular as flower vases. This tradition carried on till the Qing dynasty, to the extent that jade gu were also often made to be used primarily as flower vases. However, the wide mouth rim of these vases can be impractical if one is only putting two or three branches in the vase, as is often the case with flower arrangements in a scholar's studio. The gu vase depicted in Portrait of Emperor Qianlong in Ancient Costume (fig.1), for example, is made with an inner mouth rim (or fitted with an inner lining) that is much smaller then the outer rim, so as to keep the flower branches upright. The jade carver of the present vase resolved this issue by adding the extra flange in the interior, thereby reducing the opening of the vase in order to hold flowers better. It is an ingenious but extremely lavish way to solve the problem, and indicates that the vase could only have been made for the use of the emperor himself, probably on the writing desk of his own study.