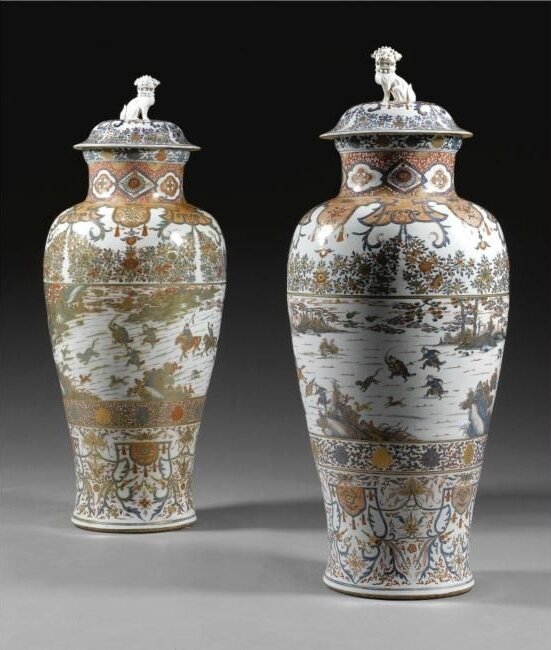 each body of slender baluster form, painted around the exterior with a hunting landscape scene depicting equestrian and foot huntsmen wielding swords and lances in pursuit of a tiger and deer amidst rocks and swirling clouds, all within floral panels and swags at the shoulder and foot, the domed covers similarly decorated and surmounted by later biscuit lion finials.

Note: Chinese Imari vases of this magnificent size, impressive decoration and superb quality are extremely rare, although a closely related pair, similarly painted with deer hunting scenes, but with different border design around the shoulder and foot, was sold at Christie's London, 1/2nd March 1976, lot 362. A single vase of this form and related decoration can be found in situ in the 'Troost Room', Rijksmuseum, Amsterdam, illustrated in Christiaan J.A. Jorg, Chinese Ceramics in the Collection of the Rijksmuseum, Amsterdam, Amsterdam, 1977, p. 1, fig. 6. See also a pair of vases of this baluster form and large size, but decorated with birds and flowers, from the collection of North Mymms Park, sold at Christie's London, 26th September 1979, lot 729, and again, 13th November 1984, lot 236.

Wares painted in underglaze blue, overglaze iron red and lavish gold are after Japanese Imari porcelain made in Arita, Kyushu, for export to the Netherlands from the last quarter of the 17th century. Japanese Imari wares also reached Europe via China, as Chinese merchants bought them in the port of Nagasaki and shipped them to Canton, Macao and Batavia where they were sold to European merchants. Success in this trade led Chinese potters to make Imari imitations at the kilns in Jingdezhen, Jiangxi province, which proved to be a cheaper and a much more profitable business for all parties involved. However, Chinese Imari wares primarily imitate the colours but are not close copies of the Japanese originals. In shape and decoration, Chinese Imari wares are often after contemporary blue and white garnitures made for the export market. Production of Chinese Imari wares reached its peak in the 1720's and 1730's, when it became one of the main group of orders by the Dutch East India Company (V.O.C.) operating in China. For examples of Chinese Imari pieces made during the 18th century see the collection in the Rijksmuseum included ibid., pls. 224-229; and vessels from the collection of Augustus the Strong and now in the Zwinger, Dresden, published in Eva Strober, La Maladie de Porcelaine, Leipzig, 2001, pls. 37-40. Strober, ibid., p. 90, mentions that Chinese Imari pieces in the Zwinger collection were classified as Japanese in the original inventories.