Delegates pay attention to the speech that Swiss President, Pascal Couchepin, gave during the inauguration of the 'Hall XX' at the European headquarters of the United Nations in Geneva, Switzerland. The dome was painted by Miquel Barcelo. Photo: EFE / Salvatore Di Nolfi.

"The Spanish Foreign Ministry says the government is funding 40 percent of the costs, with the rest footed by private-sector donors. Of the public money, 500,000 euros (US$633,000) comes from a budget for overseas development aid and international organizations like the United Nations," reported the Associated Press.

"Nothing better than art as a universal message to express the values and beliefs that inspired the United Nations," said King Juan Carlos.

There were more than 700 guests, many people were left standing. The businessmen who donated money for the project were also present, a large group of leaders from Balear and 40 friends of the artist were there too.

Using over one hundred tons of paint with pigments from all corners of the globe, specially designed equipment, and with the involvement of specialists in various disciplines, including from particle physics laboratories, engineers, architects and others in heritage restoration, Miquel Barceló gathered himself a truly exceptional support team to overcome unprecedented technical and artistic challenges for the completion of this ambitious project.

"The cave is a metaphor for the agora, the first meeting place of humans, the big African tree under which to sit to talk, and the only possible future: dialogue, human rights," Barcelo said to Deutsche Presse-Agentur.

The “Chamber for Human Rights and for the Alliance of Civilisations” is the room’s official title and it is now the permanent home of the newly created United Nations Human Rights Council. It is the UN’s most modern negotiating room, using the latest materials and technology in audiovisual resources, conference services, interpretation systems, information technology and telecommunications.

Miguel Zugaza, director of the Museo del Prado, defined the artwork as " Barcelo's most important and the best public art project made by Spain in several decades." He continued saying, "More than the Sistine Chapel, the dome is more like the ones by Manet and the one by Rothko, and above all the one in Altamira."

Barcelo has always liked that world. It is in the modern tradition that represents not power but the world's diversity and citizenship. This work will be very important for him and for the 21st century," said Zugaza.

The project began on 9 April 2007 and over the following two months the room’s original interior was dismantled, along with its plaster dome. A new super-strength, custom-made aluminium structure for the dome was put in place and M. Barceló started work on 1 September.

Miquel Barceló is renowned for the extraordinary diversity and originality of his work, which has ranged from a series of spectacular terracotta murals for a chapel in the cathedral in Palma de Mallorca to a mesmerizing performance piece/living sculpture with the Hungarian/French choreographer Josef Nadj. Barceló’s amazing creative output has been compared to such great Spanish masters as Pablo Picasso, Joan Miró and Antoni Tapies and to outstanding contemporaries European artists such as Francesco Clemente and Anselm Kiefer.

Born in Majorca in 1957, Miquel Barceló studied at the School of Arts and Crafts in Palma and the Fine Arts Academy in Barcelona. In 1974 he held his first solo exhibition at the Galería d'Art Picarol, Cala d'Or, Majorca. During the 1980s he traveled in Europe, the United States and West Africa and in 1982 he achieved international acclaim for his participation in Documenta 7 in Kassel. Barceló works with a wide-range of media and projects, from paintings and drawings, to backdrops for opera, murals and engravings, and terracotta and ceramic sculptures. From 2001 to 2006 Barceló worked on a project for the cathedral in Palma, covering an entire chapel in terracotta and then decorating it with images relating to the sixth chapter of the gospel of St John. Recent solo exhibitions include Pinacoteca do Estado, São Paulo, 2003; Musée du Louvre, Paris, 2004; Galerie Bruno Bischofberger, Zürich, 2005, and Sala Kubo, San Sebastián, 2005. Barceló currently lives between Paris, Majorca and Mali. 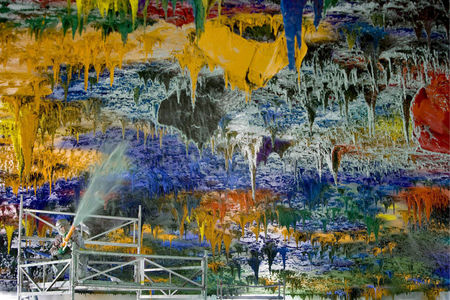