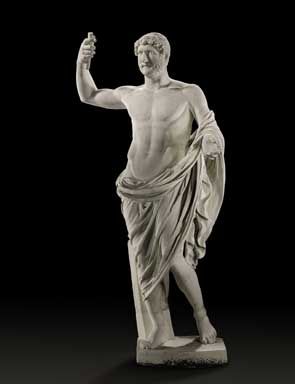 NEW YORK.- Christie's announced the fall sales of Antiquities and the tenth annual Ancient Jewelry sale, on December 9. Both sales will offer a strong selection of works, from sculptures to wearable ancient art representing Egypt, the Near East, Greece and Rome. With estimates ranging from $2,000 to $700,000, both sales are expected to achieve in the region of $7.5 million.

Antiquities Leading the Antiquities sale is an impressive Roman marble statue of the Emperor Hadrian, circa 117-138 A.D., (estimate: $350,000-550,000). During his succession, Hadrian initiated an unparalleled building program throughout the Empire. In Rome, he built the Pantheon in the Campus Martius, the Temple of Venus in the Forum, and his own Mausoleum, now known as the Castel Sant' Angelo. The statue offered was originally in the Villa Montalto-Negroni-Massimi in Rome and was later acquired in the late 18th century by John Bligh, 4th Earl of Darnley, for his home Cobham Hall in Kent, England. Other notable sculpture includes a Roman marble portrait bust of the Empress Faustina Minor, circa 162 A.D. (estimate: $300,000-500,000) and a Roman marble figure of a woman, circa 1st -2nd century A.D., exquisitely carved with fine attention to folds of her crinkly floor- length tunic (estimate: $250,000-350,000).

The sale’s cover lot is a fantastic Egyptian black granite bust of an official, circa 4th- early 3rd century B.C., (estimate: $250,000-350,000). A partially preserved inscription on the back pillar informs that the official served as a Treasurer of Lower Egypt. His high status in ancient Egyptian society gave him access to expensive materials and top tier artists as demonstrated by the high quality of his portrait.

Further highlights include an early Christian silver paten, circa late 4th- early 5th century A.D., (estimate: $600,000-800,000), which is hammered from a single sheet that meticulously illustrates Christ, Peter and Paul each clad in a short-sleeved tunic; an over life-sized and a realistic Roman bronze portrait head of the Emperor Vespasian, circa mid 3rd century A.D., (estimate: $700,000-900,000), and a Bactrian copper alloy seated female figure, circa late 3rd –early 2nd millennium B.C. (estimate: $70,000-90,000), one of the largest and finest copper alloy figures know from Western Central Asia.

Ancient Jewelry Christie's tenth annual sale of Ancient Jewelry will offer over 120 lots of wearable works of art including beaded necklaces, earrings, bracelets, and ancient stone rings, with many examples in their original settings and others in modern mounts. The sale’s top lot is a pair of Greek gold bracelets, Hellenistic period, circa late 4th- early 3rd century B.C. (estimate: $80,000-120,000). With a lion head on each terminal, the bracelets is exceptional in terms of scale, quality and condition with a style closely paralleled in Tarentine and other South Italian jewelry.

Ancient ring stones are well represented in the sale, some loose, while others are mounted as a ring, either in the original or a modern setting. The finest is an Etruscan carnelian scarab and gold finger ring, circa late 5th century B.C., (estimate: $25,000-35,000). The underside of this impressive scarab is finely engraved with the hero Bellerophon riding the winged horse Pegasus, and spearing the Chimaera, depicted as a lion with its head turned back. 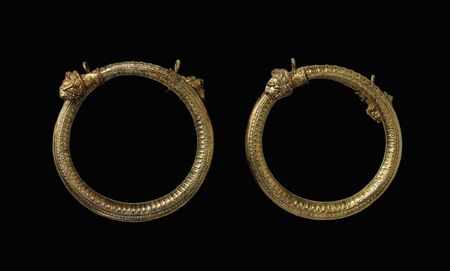 A Pair of Greek Gold Bracelets, Hellenistic period, circa late 4th-early 3rd Century B.C. Each formed from a hollow hoop overlapping at the ends, the inner surface flat from which rise long tongues, each with a single punched dot at the tip, the zone above dotted, a thin band of bead-and-reel above, the outer surface of the hoop unembellished but for each end where plain convex bands alternate with twin hatched bands, each terminal in the form of a lion head fashioned from sheet, with some details stippled, the lolling tongues and fangs inserted, the eyes detailed in blue enamel in circular frames, the cylindrical collars with bands of twisted wire tongues edged with beaded wire, each terminal joined to the hoop by a pin with a beaded loop and flattened ends. Each: 3 7/8 in. (9.8 cm.) diameter (2). © Christie’s Images Ltd. 2008.