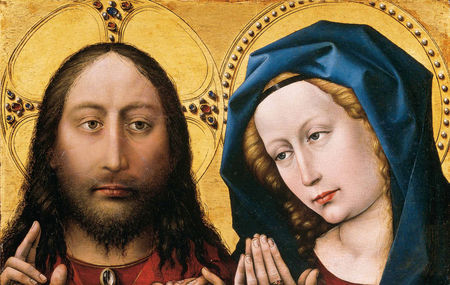 FRANKFURT.- The Master of Flémalle (frequently identified with the artist Robert Campin, active in Tournai) and Rogier van der Weyden (who demonstrably worked in Campin’s workshop from 1427 to 1432) are – besides the van Eyck brothers – of crucial importance for the birth and the beginnings of Early Netherlandish painting. They stand for the discovery of the visible world which they were able to represent in hitherto unknown realistic detail thanks to the sophisticated new technique of oil painting. Though the Master of Flémalle and Rogier van der Weyden number among the most important and innovative fifteenth-century European artists and their opulently detailed narrative paintings belong to the most beautiful and popular works of art from the turn of the late Middle Ages to the early modern age, there has been no monographic exhibition focusing on these two painters and their work to date – irrespective of the fact that the differentiation between the two oeuvres is still controversial. Four monumental monographic books, arriving at partly radically divergent conclusions concerning this issue, have been dedicated to the two artists only in recent years. Under these circumstances, the exhibition organized by the Städel Museum together with the Gemäldegalerie der Staatlichen Museen zu Berlin offers a splendid opportunity to arrive at persuasive answers based on direct comparison in this contentious matter.

Both the Städel Museum in Frankfurt and the Gemäldegalerie der Staatlichen Museen zu Berlin boast incomparable holdings as regards the Master of Flémalle and Rogier van der Weyden, which will be brought together in this exhibition for the first time. The show will also comprise numerous superb loans from the great museums of the world such as the National Gallery in London, the Museo del Prado in Madrid, the Metropolitan Museum of Art in New York, the Musée du Louvre in Paris, the State Hermitage Museum in St. Petersburg, the National Gallery of Art in Washington, and the Kunsthistorisches Museum in Vienna. More than 50 masterpieces by the two artists – i.e., nearly all surviving and transportable paintings – will be assembled for the occasion. Many of the works have never been lent out before, most of the works will be presented together for the first time. The show thus provides a unique occasion to experience the visual world of two of the most important and influential fifteenth-century artists in a hitherto unknown quality and density. For the Städel Museum and its highcaliber collection of Early Netherlandish painting, this exhibition represents a landmark for the research in this field intensely pursued at the institution for many years.

The genesis of the “ars nova,” that revolutionary new painting emerging in the Netherlands, which, with its truthful rendering of details of reality and its possibilities for psychological representation, marks the beginning of modern painting in the early fifteenth century, is certainly one of the most fascinating chapters of European art. This development was made possible by a new technique of painting that relied primarily on oil instead of traditional tempera as its binding agent. The deceptive depiction of women’s immaculate complexion or the wrinkles of old age, of the character of thick wool and shining silk, of fluffy fur and burled felt, which already fascinated contemporaries north and south of the Alps, still mesmerizes today’s viewers. The same holds true for the touching description of a solicitous Virgin Mary putting her baby to her breast or a mourning Mary Magdalene at the Cross with tears running down her cheeks. While details unseen before became worth representing for the first time, the painters described time-honored motifs with an emotional intensity and precision that made the mainly religious works almost painted instructions for the pious viewer of the time.

In addition to Hubert and Jan van Eyck, two artists are of pivotal significance for the dawn and early development of this painting: the so-called Master of Flémalle and Rogier van der Weyden. Their production is closely interlinked, which has given rise to fundamental problems in distinguishing the two masters’ works until today since the paintings are neither signed nor dated. This is why the understanding of these most important and influential artists of the fifteenth century has remained so strangely diffuse and controversial.

While the world-famous “painter to the town of Brussels” Rogier van der Weyden (1399/1400–1464) presents himself as a clearly defined historical personality according to the sources of the time, the situation is more complex in the Master of Flémalle’s case. When confronted with the latter we are dealing with an artificial figure, a creation by the critique of styles, which may only be associated with a historical person with some reservations. Since the middle of the nineteenth century, the Städel Museum’s holdings comprise three impressive panels which gave the Master of Flémalle his name, because the works were erroneously believed to have originated in Flémalle, a place situated in the Maas Valley near Liège: a Madonna nursing her child; Saint Veronica presenting her veil with the Holy Face on it; and a Holy Trinity, a representation of God the Father holding his dead son in his arms and the dove of the Holy Ghost. Once wings of an otherwise lost monumental retable, these panels, together with the van Eyck brothers’ Ghent Altarpiece rank among the most outstanding works of Early Netherlandish painting. Merely based on stylistic comparisons, an oeuvre attributed to the Master of Flémalle was grouped around these Frankfurt paintings and the so-called Mérode Altarpiece, named after its former owners – which is one of the highlights of the Metropolitan Museum of Art in New York and will also be shown in the Städel Museum’s exhibition – shortly before 1900.

It was only some years later that four paintings could be identified as unmistakably modeled on works by the Master of Flémalle, without achieving their quality, though, at the beginning of the twentieth century: these were four wing panels of a Madonna altarpiece executed by the painter Jacques Daret (ca. 1401 – after 1468), a native of Tournai, for the Abbey Saint Vaast in Arras between 1433 and 1435, which will also be presented in the exhibition. Considering the dependence of Daret’s panels on the Flémallian’s works and the fact that he had verifiably been a pupil of Robert Campin (ca. 1375–1444/45), an artist who also worked in Tournai, and spent the years from 1427 to 1432 in his workshop alongside with Rogier van der Weyden seemed to suggest that the Master of Flémalle was nobody else but Robert Campin.

However, this widely accepted identification of the Master of Flémalle with Robert Campin raises considerable problems. While Rogier van der Weyden was already a celebrity during his lifetime and a painter whose posthumous fame never waned, contemporary sources show Robert Campin as an artist respected in Tournai, whose reputation did not go beyond his home town and whose name fell into complete oblivion soon after his death until being rescued by archival research only in the nineteenth century. This provides an irritating contrast to the renown of the works this artist had allegedly painted. What is even more important is that Robert Campin was already born around 1375 and thus must have developed his identity as an artist during his years as a pupil before 1400. Yet, the epoch-making works, which would have to be attributed to him when identifying him with the Master of Flémalle, date from around 1430 and reveal no echoes of the art around 1400 at all. If Campin had been the Master of Flémalle, he would have contributed to initiating the artistic revolution in the Netherlands at about the age of 55, i.e. as an old man according to the circumstances of the time.

This is why it seems much more plausible to regard Robert Campin as an extremely successful artist entrepreneur who, with great skill, succeeded in temporarily integrating the experience and know-how of younger artists, among them nobody less than Rogier van der Weyden, into the operation of his workshop. As the person responsible, Campin organized and coordinated the major commissions, but probably delegated their execution mostly to the artists working for him. Essential impulses for something fundamentally new in the production of Campin’s workshop seem to have been provided only when Rogier joined it in 1427, and he most likely played a decisive role particularly in the artistic conception and execution of the name-giving Flémalle panels. It are above all the stylistically more antiquated works still committed to the art of the turn of the century, such as the Brussels “Annunciation” or the Berlin “Madonna by a Grassy Bank” – both of which are included in the exhibition – that reveal Robert Campin’s own hand. Comparing the Brussels “Annunciation” with the “Mérode Altarpiece” modeled after it, yet evincing a stylistically and technically “modernized” approach, will elucidate the difference in generation between Campin and the younger, more advanced members of his workshop. To put it in a nutshell: the Master of Flémalle’s work is anything but homogenous, and the artist is no definable individual that may be unrestrictedly identified with Robert Campin as frequently done.

The exhibition not only grants an opportunity to explore the controversial issues of the various works’ authorship in direct comparison so that each visitor may form his or her own notion concerning the matter. It also challenges viewers to immerse themselves in the visual world of the fifteenth century and regard its reality, which has become unfamiliar to us, as in a “distant mirror.” Particularly the mostly religious paintings transfer their subjects to a contemporary setting and provide their figures with the costumes of the period without any inhibitions. Numerous motifs, however, conceal symbolic meanings that are not or hardly accessible to today’s viewer. These were of course well-known to the contemporary believer and endow the representations with an astounding depth. Thus, visitors may set out on a voyage of discovery and explore what is behind the sumptuously detailed surface of the pictures’ concise narrations to come to an understanding of the richness of fifteenth-century life. Master of Flémalle, Diptych of the Holy Trinity and the Virgin by the Fireplace. Oak panel, 122 x 151,2 cm. Photo: Staatliche Eremitage, St. Petersburg, right side 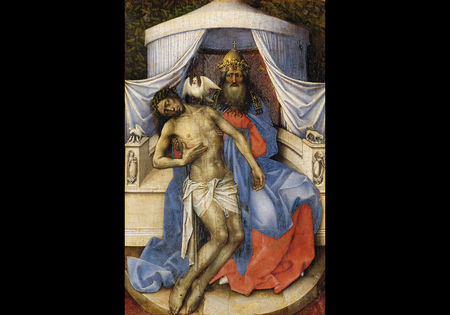 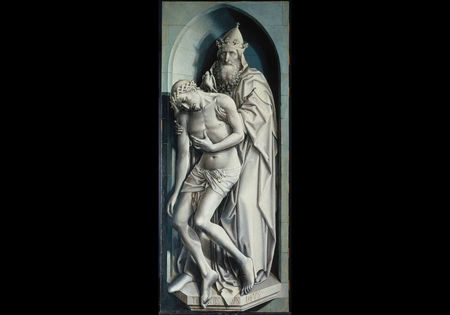 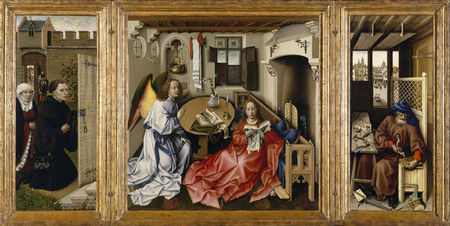 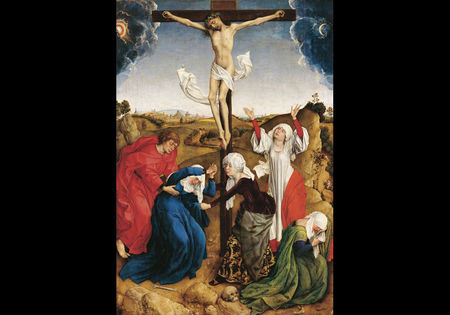