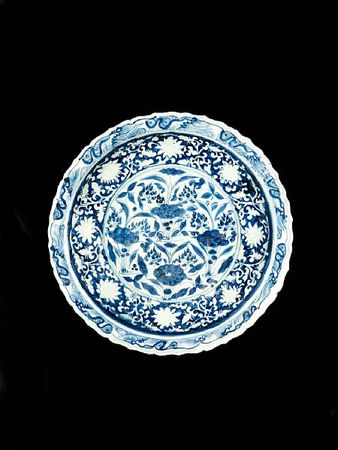 The central medallion freely painted with four clusters of blossoming lotus and other aquatic plants, encircled by a moulded band of lotus blossoms separated by spiky leaves reserved on a blue ground, the details of the moulding highlighted with white slip, the wide flange rendered with a band of turbulent waves, the flange edge painted inky blue, the exterior decorated with a band of lotus lappets enclosing freely-drawn ruyi motifs and circles, the base unglazed, coated with a brown slip bearing an Arabic inscription in black ink, fitted box. 42cm (16½in) diam. (2). Estimate: HK$1,400,000 - 1,600,000, $180,000 - 210,000 - Unsold. 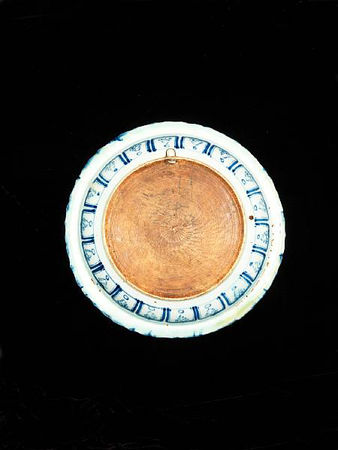 Footnote: A similar dish, but with the addition of two ducks in the central medallion is illustrated by John Carswell in Blue and White: Chinese Porcelain Around the World, Chicago, 2000, p. 55, where it is noted that the dish was found in Damascus. Also illustrated on p. 42 is another dish with a similar design in the central medallion, but without the moulding on the cavetto. Two other dishes with similar design are illustrated by Regina Krahl in Chinese Ceramics in the Topkopi Saray Museum, Istanbul: A Complete Catalogue II, Yuan and Ming Dynasty Porcelains, London, 1986, no. 570, p. 496. There are over a hundred surviving examples of such dishes in the Near East, Central Asia and India, although those with moulded decoration are relatively rare.

Such large dishes were made in response to the Middle Eastern and Mongolian communal dining practices, and spread along the silk route with Mongolian influence. The inscription on the reverse has been translated as 'langari' and 'Abbas'. 'Langari' refers to a charger or a tray, and 'Abbas' may refer to Shah Abbas who was responsible for the rebuilding of the Ardebil Shine in the 15th century.