School of Madrid, circa 1650, a vanitas still life with a skull, a violin, a pewter plate, a vase of flowers, a book and...

School of Madrid, circa 1650, a vanitas still life with a skull, a violin, a pewter plate, a vase of flowers, a book and... 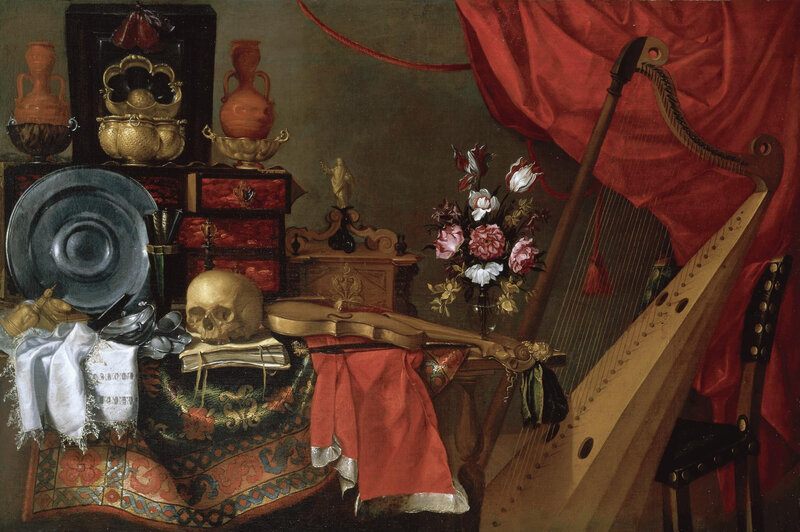 PROVENANCE: In the collection of a Spanish noble family until the early 1990s.

NOTE: This beautifully preserved still life has so far escaped definite attribution. Long thought to be by Antonio de Pereda, it is almost certainly the work of an artist active mid-century in Madrid, at the court of Philip IV, where the transience of worldly existence was the subject of general fascination, as shown by Calderón de la Barca´s La vida es sueño, first performed in 1637, and where the pictorial theme of vanitas was especially popular.1 The artist of the present painting would seem to have been familiar with works such as Pereda´s Vanitas of circa 1634, now in Vienna, one of the great masterpieces of the Spanish baroque, and the Dream of the Knight, in the Real Academia de Bellas Artes de San Fernando in Madrid. The latter, also traditionally given to Pereda, has more recently been associated with the lesser-known Francisco de Palacios, based on the description, in that artist´s 1651 will, of a painting commissioned by one Luis de Carrión, who, interestingly in the context of our painting, is identified as "court harpist."2

In a letter to the previous owner (dated 17 December 2004) Prof. Alfonso E. Pérez Sánchez notes the present painting's "calidad soberbia", while expressing uncertainty as to its authorship, rejecting an earlier proposal of Francisco Collantes made by another scholar (that hypothesis was based on a reference, in the 1662 inventory of Francisco Marchant, to a bodegón de vanitas by Collantes, two varas, or 168 cms. wide, containing "una calavera, unas flores y un espejo"). In his letter Pérez Sánchez suggets an artist close to Pereda or Antonio Ponce, but also raises the possibility of an alternative attribution to a Lombard painter such as Bartolommeo Bettera, an idea which has not since found acceptance among scholars of Italian still lifes. There are in fact other examples in Spain of a Bergamesque connection, as seen in the late works of the Sevillian Pedro de Camprobín, or in the Still Life of Flowers and Boxes, in the Musée Calvet in Avignon (see figure 1). Although the latter is not a vanitas, and it is by a different hand than our painting, it is a similar italianate composition, and also like our painting, has so far proved difficult to attribute convincingly. Clearly by a Spanish hand, the Avignon painting was previously given to Camprobín, but it is now exhibited as mid-seventeenth century Madrid school, as proposed by Prof. Enrique Valdivieso.

Given the present work's Spanish provenance and the origin of many of the objects it contains, the attribution to a Madrid artist seems likely. The tortoiseshell inlaid cabinet is of Spanish manufacture, as are the silver gilt wine cups, known as bernagales. The búcaros, or tall-necked, dimpled terracotta vases, were likely imported either from Estremoz, in Portugal, or Tonalá, in the New World (Mexico), and are of a type often found in still lifes of the period.

Commentaires sur School of Madrid, circa 1650, a vanitas still life with a skull, a violin, a pewter plate, a vase of flowers, a book and...