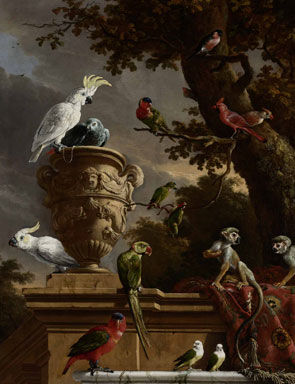 AMSTERDAM.- Starting on 18 December, Rijksmuseum Amsterdam will exhibit six paintings from its own collection by Melchior d’Hondecoeter (1636-1695). Hondecoeter was the best-known Dutch painter of what are known as the ‘bird pieces’ of the 17th century. These paintings depict various types of birds, both indigenous and exotic. The presentation entitled Melchior d’Hondecoeter: Fowl contains a number of paintings commissioned by Stadtholder-King William III (1650-1702) for his palaces at Soestdijk and Het Loo and recently restored by Rijksmuseum.

Hondecoeter was the first Dutch painter who managed to depict birds with a high degree of ‘liveliness’. He painted works featuring poultry and game still lifes and invented a new theme in the art of painting: park landscapes with exotic birds. Hondecoeter’s paintings featured geese (brent, Egyptian and red-breasted), fieldfares, partridges, pigeons, ducks, magpies and peacocks, but also African grey crowned cranes, Asian sarus cranes, Australian sulphur-crested cockatoos and even an Indonesian greater noble parrot and two grey-headed lovebirds from Madagascar. Most birds painted by his predecessors took up static positions in the scenery, but Hondecoeter seemed to capture them in a snapshot style, as a result of which they could seemingly fly away or walk off any second. The animals on his canvases also show some interaction among themselves, creating exciting confrontations.

It is not surprising, then, that Hondecoeter’s work was extremely popular among the wealthy families of his time, of which there were quite a few owing to the economic prosperity of the Golden Age. They had their country mansions and city dwellings embellished with decorative murals. Hondecoeter’s exotic bird pieces were well suited for this. His fame reached a pinnacle when Stadtholder King William III commissioned several paintings during the last quarter of the 17th century. In addition to works for Soestdijk and Het Loo, other paintings were commissioned for his country house Honselaarsdijk, which now no longer exists.

The presentation will also focus on the recent restoration of bird pieces, offering new insights in the genesis of these paintings. Hondecoeter allowed himself quite a few liberties in his work: animals were repainted, adjusted or inserted.

Four of the paintings in this special exhibition will be in the William and Mary Hall in the renovated Rijksmuseum: Jachtbuit bij een bordes (Hunting catch on a landing), Jachtbuit bij een ekster op een boomstronk (Hunting catch with a magpie on a tree-stump), De menagerie (The menagerie) and Een pelikaan en ander gevogelte bij een waterbassin, or Het drijvend veertje (A pelican and other waterfowl and birds near a basin, also known as The floating feather).

A special partnership with Artis Zoo in Amsterdam was established for Melchior D’Hondecoeter: Fowl. During the duration of the exhibition (18 December 2008 – 9 March 2009), members of Artis will have free access to the Rijksmuseum, and Friends of the Rijksmuseum can visit Artis for free. In addition, full-sized prints of the paintings in the exhibition will be placed in the zoo’s pheasantry, which houses some of the same birds as shown in the paintings. Melchior d'Hondecoeter, A Pelican and Other Birds Near a Pool, known as 'The Floating Feather' ca. 1680