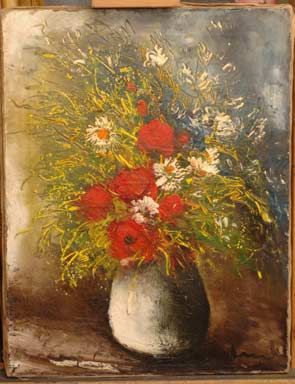 BOSTON, MA.-Robert Mardirosian, a Boston lawyer, was sentenced to 7 years in a Federal jail for concealing stolen pictures for 30 years and for trying to profit from them. They were originally entrusted to him by the alleged thief whom he represented.

In 1978 seven pictures including a Cezanne painting, Bouilloire et Fruits, were stolen from the house of Michael Bakwin in Massachusetts. There was no trace of them until 1999 when attempts were mate to sell them in London and the Art Loss register was retained by Mr. Bakwin to recover them.

The Art Loss Register (ALR) negotiated over 6 months refusing to pay sums demanded for the return of the pictures unless the holders declared their identity and how they obtained them.

The holder, now known to be Mardirosian, negotiated through Swiss lawyers and a company in Panama to hide his identity. With the agreement of the FBI and the Swiss police the Art Loss Register accepted the return of the Cezanne valued at $26 million whilst the other pictures worth much less were retained by the holder and these were then seized when Mardirosian tried to sell them at Sotheby's through intermediaries in 2006.

Federal Judge Wolfe in Boston said it was crucial to send a message to other lawyers to resist the temptation of crime.

Julian Radcliffe, Chairman and main negotiator for the ALR, was one of the principal prosecution witnesses at the trial and said, "This is a major victory in the fight against art crime and will remind awyers that they cannot use their privileged position to try and extort ransom whilst refusing to identify the holder. There is no automatic right of a reward for anyone, particularly criminals. There are several other similar cases awaiting trial in the UK."

A Boston law firm, Dwyer & Collora on behalf of the owner and the ALR is pursuing a civil case for the recovery of the costs incurred in their efforts to recover the pictures over the past 30 years.

The ALR is the world's largest private international database of lost and stolen art, antiques and collectibles providing recovery and search services to private individuals, collectors, the art trade, insurers and law enforcement through technology and professionally trained staff of art historians.

The ALR was formed in 1991 through a partnership between leading auction houses and art trade associations, the insurance industry and the International Foundation of Art Research. The ALR has been involved in the recovery of over 1,000 works of art worth with an estimated value of GBP 100,000,000. With over 185,000 items on its database of lost and stolen art and antiques, it undertakes over 300,000 searches a year. The ALR is recognised as an integral part of art recovery and assists museums and the art trade undertake due diligence. The ALR is more than just a database as its expertise in the field of art crime, inventory management and title negotiations denote.