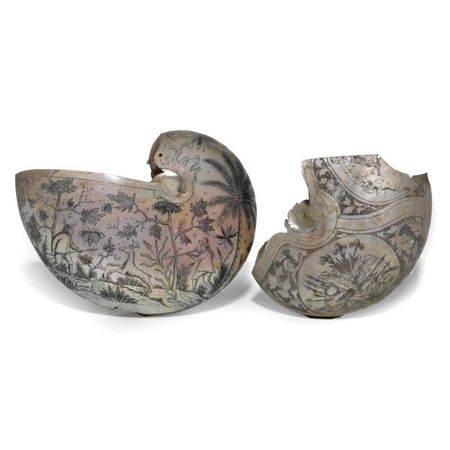 formed by a Nautilus shell, the iridescent surface lightly engraved and blackened to depict huntsmen in pursuit of stag and boar, the inside with a stylised cavalry helmet, bottom lacking small section; together with a similar, fragmentary cup engraved with trophies of war, the figure of King Gustavus Adolphus partly visible. the first: 12 by 16 cm. Estimate 1,000—1,500 EUR - Lot Sold. 12,500 EUR

NOTE: Castle Wernigerode in Sachsen-Anhalt, as it presents itself today assumed this shape in circa 1880, replacing a Baroque castle built early in the 18th century by Count Christian-Ernst zu Stolberg-Wernigerode. The foundations for a medieval fortification had been laid in the 12th century, ensuring the emperor's path to the hunting grounds in the Harz. Since this time the lands encompassed those of the counts of Wernigerode. The counts of Stolberg inherited the county of Wernigerode in 1429 and thereafter adopted the name Stolberg-Wernigerode.

Juliana, Countess of Stolberg (1506-1580) married in 1531 Count William of Nassau-Dillenburg, thus served as the origin of the House of Orange. Her son William is remembered as the liberator of the Netherlands from the Spanish yoke. Another lady of this august family was Augusta Louise, who corresponded with Johann Wolfgang von Goethe, referred to by the latter as 'Gustchen'. Yet another lady to enter history was Luise Maximiliana, who married Charles Edward Stuart, also known as 'Bonny Prince Charlie'.

In the 19th century the most famous exponent of this noble family was Count Otto zu Stolberg-Wernigerode, who was elected president of the Prussian province of Hanover, then German ambassador to Vienna and finally vice-chancellor to Fürst Bismarck. During his career, castle Wernigerode was transformed under the guidance of Carl Frühling into a 'Historismus' castle from 1862-1885, and in 1890 the family was elevated to a 'Fürsten Familie'.

The works of art offered hereafter all formed part of the furnishings of castle Wernigerode.