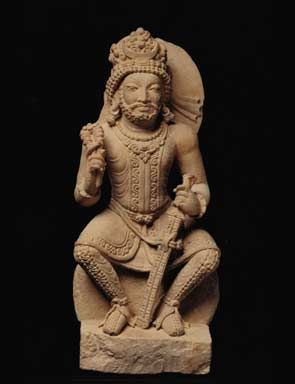 Among the pieces on display is a magnificent, leonine head in terracotta from the 4/5th century kingdom of Nagarahara in Afghanistan, representing Vajrapani, the spiritual guide of the Buddha. Portrayed as wild and unkempt, his appearance is inspired by Hellenistic images of Herakles and offers a dramatic contrast to that of the serene, handsome Buddha. In friezes, Vajrapani is often depicted standing beside the Buddha, as if offering advice and apparently invisible to the other  in the scene. Vajrapani’s powerful physique is indicative of his role as a defender of Buddhism.

A handsome 2nd/3rd century figure of a standing Buddha sculpted in grey schist exemplifies the Buddha image that developed in Gandhara in the 1st/2nd century, eventually becoming a prototype of the forms that evolved elsewhere in Buddhist regions of Asia. Gandhara was a large region, embracing a number of affluent trading cities in the foothills of the western Himalayas, whose wealth allowed them a degree of political autonomy within the Kushan empire. Contacts with the Hellenistic world as well as China, Central Asia and India resulted in the emergence of a distinctive, cosmopolitan art tradition in the region. This statue is distinguished by the subtle movement in the folds of the robe, gravitating towards the left leg and balanced by the suggestion of cloth stretched over the left shoulder and arm. The beautifully sculpted left hand and the Buddha’s feet are strikingly realistic. The figures on the base of the statue record a Buddhist legend of two merchants who became the Buddha’s first lay disciples.

The exhibition includes several fine pieces from different regions of India, one of the earliest being an enigmatic sandstone figure dating from the late 6th/early 7th century. It comes from North-western India, probably from the Salt Hills of Punjab, and represents an Indian god, although he is depicted in the guise of a Sassanian governor. The Sassanians (224-651), the last dynasty of Persian kings before the Arab Conquest, were Zoroastrians and the fire altar was the chief symbol of a spiritual presence. Nevertheless, an imperial portrait such as this was a powerful propaganda tool for controlling their occupied territories. Punjab, hedged between the Sassanian and Gupta empires, was open to both cultural traditions. Under Gupta patronage, the visual arts flourished across northern India but artworks such as this indicate that some sculptors looked to Iran for visual inspiration. Indian gods are youthfully beautiful, but this figure looks mature and his seated pose is typically Sassanian. His costume is that of an Iranian horseman, of heavy fabric with fine embroidery, worn with boots. The emblem in his right hand is indicative of kingship and he carries a sword as well as a massive crown as worn by Sassanian emperors.

A remarkable 9th/10th century phyllite stone sculpture from Eastern India depicts the Bodhisattva Padmapani. Bodhisattvas are Buddhist spiritual guides who have achieved the rank of Buddhahood but rather than pass into Nirvana, the ultimate state of bliss, have chosen to remain within the human realm to protect and encourage others to follow their example. Padmapani, the lotus bearer, was created from the ray of light emanating from the eye of Amitabha Buddha. Also known as Avalokiteshvara, Padmapani, along with his female counterpart Tara, embodies compassion and he looks down on the world from his mountaintop throne, perpetually shedding tears as he witnesses the follies of mankind. This sensitive portrayal reflects the refinement of both religious teaching and artistic achievement of the early Pala empire which flourished in Bihar from the mid 8th to late 12th centuries and drew scholars from the length and breadth of the Buddhist world. Temples were built of fired brick, with polished stone statues such as this placed in niches. The bodhisattva is seated in lalitasana, the pose of royal ease, and his elegant dress and jewellery befits a prince of Buddhism. He is identified both by the lotus stem in his left hand and the small image of Amitabha Buddha in his hair. Two lions, symbolising the Buddhist faith, support his throne and the flames bordering the back plate sanctify and protect him.

From late 11th/12th century South India comes an elegant bronze figure of Lakshmana, the devoted younger brother of the Hindu god Rama. Vishnu, the god of preservation has ten principal forms (avatara), the seventh of which is Rama, the hero of the classical epic, the Ramayana. In South India in the Chola period (9th/13th centuries), bronze images of the gods were made for the temples and Rama was depicted accompanied by his wife Sita and brother Lakshmana. According to the epic, Lakshmana willingly sacrificed his personal freedom for his brother and he exemplifies the virtues of unselfishness and fraternal devotion. Here Lakshmana’s youth is charmingly expressed in his child-like proportions and the idealised youthful beauty of his face.

A dramatic Cambodian bronze figure of the god Vishnu riding Garuda dates from the Angkor Wat period of the 12th century. The image of Vishnu riding through the heavens on his half man/half bird companion Garuda originated in northern India in the Gupta period, 4th/6th century. The energetic vision of this most popular god inspired sculptors in other regions where Hindu beliefs took root, notably South-east Asia. In the hands of Khmer sculptors of the Angkor Wat period, this familiar form reached new heights of dramatic intensity, with Garuda rather than Vishnu becoming the dominant figure. This is because Garuda is the enemy of the nagas, serpent deities occupying the waterways who have to be appeased. In South-east Asia, where poisonous snakes are a constant threat to farmers working in the rice fields, Garuda appears to have been a focus of popular worship. Amongst Hindus generally he is regarded as reinforcing Vishnu’s role as preserver of life, his fierce appearance and personality contrasting with the benign demeanour of his master. This bronze group dates from the reign of Suryavarman II, an adherent of Vishnu and the king responsible for building Angkor Wat.

One of the earliest and most remarkable of John Eskenazi’s recent acquisitions is an elaborately decorated Bengali terracotta gourd-shaped vase dating from 2nd/1st century BC from Chandraketugarh, 34 km east of Calcutta. The terracotta vases of early Bengal are distinguished by their intricate figurative decoration featuring divine and human figures in halcyon landscapes reminiscent of the region’s forests and waterways. The body of this vessel is divided into three bands above a double lotus petal rim. The broadest depicts a god standing beside a mango tree surrounded by adoring figures. On the other side a horse-pulled chariot and an elephant carrying male and female riders are observed by other figures. Around the shoulder of the vase is a naturalistic frieze of forest elephants with lotus fronds around their necks. The neck of the vase is ornamented with tendrils of lotus flowers and leaves with a band of lotus petals around the lip. It is assumed that such vases had a ritual significance and were used as libation vessels or contained liquors or oils used in religious ceremonies.

John Eskenazi’s exhibitions in New York attract collectors and museum curators drawn to the quality and aesthetic beauty of the pieces he offers. John Eskenazi joined the family art business in 1977 in Milan and established his own London gallery in Mayfair in 1994. In 2006 he decided only to deal privately and is now available to clients by appointment. His expertise and scholarship in Indian and South-east Asian art are internationally recognised and his clients include major museums such as the Metropolitan Museum of Art in New York and the Victoria and Albert Museum in London, as well as discerning private collectors.