Worshiping Women is organized by the Onassis Foundation (USA) in collaboration with the National Archaeological Museum of Athens, Greece. The exhibition is curated by Dr. Nikolaos Kaltsas, Director of the National Archaeological Museum of Greece, and by Dr. Alan Shapiro, the W.H. Collins Vickers Professor of Archaeology at Johns Hopkins University. Worshiping Women is the first major exhibition in the tenth anniversary season of the Onassis Foundation (USA) and the Onassis Cultural Center.

Among the treasures being brought to New York for the exhibition are marble statues of the goddesses Artemis and Athena (National Archaeological Museum, Athens); a white-ground vase with an image of Artemis, by the Pan Painter (State Hermitage Museum, Petersburg); a red-figure vase with an image of Iphigenia, the legendary heroine worshiped as a cult figure and seen as a model for priestesses (Museo Archeologico Nazionale, Ferrara); a vase showing the Trojan priestess Theano, another model for priestesses, receiving the Greek warriors who had come to recover Helen from Troy (Vatican Museums); and a limestone grave marker (conserved with support from the Onassis Foundation) carved with the image of a young woman in bridal costume, holding a votive offering (State Museums of Berlin). Interspersed with these and other exquisite artworks are archaeological objects that document the religious practices of Classical Athens and tell the complex story of women’s roles in that society.

“If all Greek religion was about creating and maintaining a state of harmony between mortals and gods,” the curators state, “then the role of Athenian women was an integral part of that process. It was women’s essential contribution to share equally in securing and maintaining the divine favor that made Athens great.” 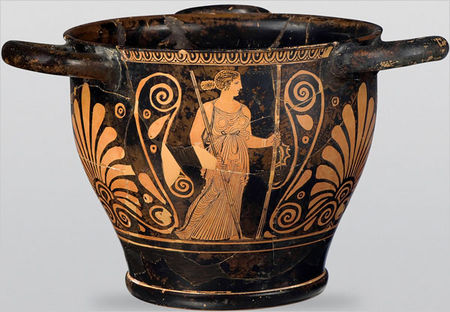 Worshiping Women tells this story in three main chapters. “Goddesses and Heroines” introduces the principal female deities of Athens and Attica, in whose cults and festivals women were most actively engaged: Athena, Artemis, Aphrodite, and Demeter and her daughter Persephone. This first section also investigates the role of heroines, a special group of women believed to have lived in the distant past, who like Iphigenia became important figures of cult worship after their deaths. The second chapter, “Women and Ritual,” explores the practice of ritual acts such as dances, libations, sacrifices, processions and festivals in which women were active in classical antiquity. Here the critical role of the priestess comes to light, specifically in her function as key-bearer for the temples of the gods. In the final chapter, “Women and the Cycle of Life,” the exhibition explores how religious rituals defined moments of transition. Because the most important transition in a girl’s life was understood to be marriage, the wedding took on great significance, with its rituals depicted on a variety of vases associated with nuptial rites and wedding banquets. Death was another occasion on which Athenian women took on major responsibilities, such as preparing the deceased for burial and tending the graves of family members. By presenting this story in the only way it can be properly told—through artworks and the material culture of the time—this important exhibition corrects the common, bleak picture of the lives of Athenian women. Although their participation in the political process was indeed severely restricted, the exhibition demonstrates that religious ritual allowed them to define themselves not only as women but as Athenians and as Greeks. Their involvement in cults, festivals and life-cycle observances, whether alongside men or separate from them, was essential for the successful functioning of the city—and was understood as such. Dr. Nikolaos Kaltsas is the director of the National Archaeological Museum of Greece and the author of a prize-winning book, Sculpture in the National Archaeological Museum, Athens (2002), as well as many other widely published archeological studies. Dr. Kaltsas is a member of the Central Council of Museums, the Central Council of Modern and Contemporary Monuments, and the Committee for the Conservation of the Temple of Apollo Epikourios.

Dr. Alan Shapiro, the W.H. Collins Vickers Professor of Archaeology at Johns Hopkins University, has a particular interest in Greek art, myth, and religion in the Archaic and Classical periods, especially in the interrelationships among art, religion, and politics. He is an authority on vase iconography and has written numerous studies, including Personifications in Greek Art (1993) and Myth into Art: Poet and Painter in Classical Greece (1994). In addition, he is the co-author of Women in the Classical World (1994). The exhibition is accompanied by a fully illustrated catalogue edited by Dr Kaltsas and Dr Shapiro, with essays by Professor Mary Lefkowitz of Wellesley College; Professor Olga Palagia of the University of Athens; Dr. Angelos Delivorias, director of the Benaki Museum; Professor Michalis Tiverios of the Aristotelion University of Thessaloniki; Professor Joan Breton Connelly of  New York University; Professor Jenifer Neils of Case Western Reserve University; and Professor John Oakley of the College of William and Mary in Virginia, among others.