"The Pre-Raphaelites" @ Nationalmuseum in Stockholm

"The Pre-Raphaelites" @ Nationalmuseum in Stockholm 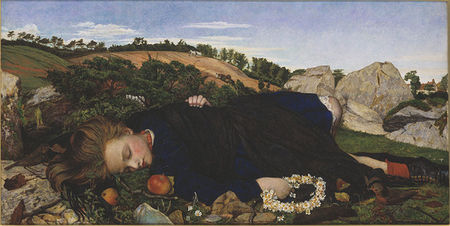 STOCKHOLM.- In the coming spring, Nationalmuseum in Stockholm will present an exhibition devoted to the pictorial world of the Pre-Raphaelites. This group of nineteenth-century English artists sought inspiration in mediaeval art. Their style is characterized by a conscious striving for beauty, existential themes and moral seriousness.

Everyone recognizes their style. It is part of our common consciousness even though we may not know the names of the individual artists. The Pre-Raphaelites were a group or “brotherhood” of English artists formed in the middle of the 19th century. They were united by an interest in art produced prior to Raphael, the 16th century Italian master; hence their name. They found their inspiration in mediaeval and early Renaissance art with its bright colours and clear outlines. The figures in their paintings – often women – give expression to intense feelings such as yearning, passion or grief. Thanks to generous loans from leading museums, primarily in the UK, the Nationalmuseum is able to bring this pictorial world to a new public. This will be the first major exhibition of Pre-Raphaelite art to be shown in Scandinavia. In spite of being some 150 years old, the themes and style of Pre-Raphaelite art remain very much alive, still retaining a capacity to move the modern beholder. Obvious references to Pre-Raphaelite imagery can be found in our own visual culture in late 20th century films, advertising and fashion. The exhibition comprises some two hundred evocative works: paintings, photographs, fabrics, glass paintings and other items from this golden age of English art.

The exhibition The Pre-Raphaelites will run from 26th February to 24th May 2009.

For centuries Raphael had been regarded as the starting point of Western art and his work continued to be normative at art academies right into the 19th century. The Pre-Raphaelites questioned this academism, opposing the norms of the day and searching for a more original style in art prior to Raphael. The group consisted of radical young artists based in London: Dante Gabriel Rossetti, John Everett Millais, William Holman Hunt and others. They found their subjects in mediaeval romances, English history, classical mythology and portrayals of contemporary Britain, and their imagery unites moral seriousness with a striving for beauty. In 1848 they founded their “Pre-Raphaelite Brotherhood”, only to dissolve it again a couple of years later. Rossetti, together with artists such as Edward Burne-Jones and William Morris, continued the legacy. Frank Cadogan Cowper, who has been called the “last Pre-Raphaelite”, lived on until 1958.

Photography, which had been invented and developed towards the middle of the 19th century, was an inspiration to the Pre-Raphaelites. Our exhibition includes some thirty photographs from this time. Contemporary society was another source of inspiration. Several of the Pre-Raphaelites were seriously concerned with the social problems that afflicted Victorian society. Their imagery was full of contrasts. Political views were combined with profound religiosity. And though the Pre-Raphaelites looked backwards in history they were also very modern in their approach. Their revolt against the established Victorian art scene has been compared with the radical movements in twentieth-century modernism. Art was to be given a nobler and more morally serious purpose. And so the Pre-Raphaelites sought to bring about a radical break with all the current conventions.

The artistic style of the Pre-Raphaelites is still alive today. The contemporary British artist Tom Hunter has given Pre-Raphaelite painting a new topicality with his photographs. The exhibition also includes examples of Hunter’s modern variations on Pre-Raphaelite images with subjects taken from contemporary London from the series of photographs entitled Life and Death in Hackney. The combination of exquisite beauty, existential themes and moral seriousness is still an attractive one.