LONDON.- The Impressionist and Modern Art Evening Sale will take place at Christie’s on 4 February and will offer 47 works of art, including exceptional museum-quality masterpieces by Claude Monet, Amedeo Modigliani, Kees van Dongen, Edward Vuillard and Henri de Toulouse-Lautrec. The auction is expected to realise in excess of £60 million and is led by an important European collection of 6 paintings, including Claude Monet’s Dans la Prairie, 1876, which was exhibited at the seminal third Impressionist Exhibition in 1877 and which is expected to realise in the region of £15 million. Highlights of the auction will be on public view at Christie’s in London from 12th January 2009.

Les couturières, 1890, by Edouard Vuillard (1868-1940), one of the seminal Nabi masterpieces which was painted when the artist was just 21 years old which is expected to realise £5.5 million to £7.5 million.

Les deux filles, a rare double portrait by Amedeo Modigliani (1884-1920) which is offered at auction for the first time having been acquired directly from the artist through his dealer over 90 years ago, and which is expected to realise £3.5 million to £5.5 million.

La Promenade d'Argenteuil by Claude Monet (1840-1926), which was painted in Argenteuil in 1872, a golden period in the artist’s career, and which is expected to realise £3.5 million to £5 million.

The auction will also present works by many of the leading masters of the category, including Kees van Dongen, Henri Matisse, Pablo Picasso, Gustav Klimt, Pierre-August Renoir, Paul Gauguin and Henry Moore.

Giovanna Bertazzoni, Director and Head of Impressionist and Modern Art, Christie’s London: “We are proud to present this auction which will showcase museum quality works of art representing many of the leading movements of the category; from classic Impressionist painting to Cubist sculpture,from a Nabi masterpiece to Surrealist art. Many of these works are appearing at auction for the first time in many years, and all of them hold a timeless appeal to international collectors who continue to be drawn to rare and exceptional works of art. We are delighted to offer an important European collection of 6 Impressionist paintings which includes two masterpieces of the 1870s by Claude Monet and a seminal work by Toulouse-Lautrec. Impressionist and Modern art continues to attract global interest and we look forward to presenting a selection of works of the highest quality from 12 January to 4 February 2009 at Christie’s.”

The auction is led by Dans la Prairie, 1876, a masterpiece by Claude Monet (1840-1926) which was exhibited at the seminal third Impressionist Exhibition in 1877 in Paris, and which is expected to realise in the region of £15 million. Painted in Argenteuil, one of the great cradles of Impressionism where the artist lived from 1871 to 1878, and where he executed a significant number of his most influential paintings, the present picture depicts the artist’s wife, Camille, reclined and reading amongst blooming flowers in an open meadow. Claude Monet was at the forefront of the Impressionist movement, and his works were a cornerstone of the three renowned exhibitions of 1874, 1876 and 1877, during all of which he was living and painting in Argenteuil. The first two exhibitions, which also included works by Renoir, Cézanne, Pissarro and Degas, drew fierce criticism from many corners of the art establishment. Louis Leroy published a review of the first exhibition in Le Charivari describing Monet’s Impression: soleil levant, and stating that ‘a preliminary drawing for a wallpaper pattern is more finished than this seascape’. Inspired by the criticism of that picture, the term Impressionists was thus imposed upon the new school of painting, now recognized as the most important and influential of the 19th century.

The seminal 3rd Impressionist Exhibition in 1877 in Paris was the first in which the artists themselves embraced the term ‘Impressionist’, and while criticism for their pioneering style could still be found, the exhibition caused much excitement. According to Théodore Duret, the great collector, patron and friend of the Impressionists, ‘The exhibition became a Parisian event. People talked about it in the cafés of the Boulevards, the clubs and the salons as though it were something surprising. It was thus much visited’. Monet’s paintings from the 3rd Exhibition can be found at museums around the world, including The Metropolitan Museum in New York, the Musée d’Orsay in Paris and the Art Institute of Chicago. The present work was acquired by Duret in 1877 and lent by him to the exhibition. It has been referenced extensively in a number of publications over the years, an indication of the painting’s importance as one of Monet’s seminal works from one of his most important and celebrated periods. It was acquired by the present collector at auction in New York in 1999. In recent years, Christie’s have offered a selection of extraordinary works by Claude Monet including Le Pont du chemin de fer à Argenteuil which was sold at Christie’s New York on 6 May 2008 for $41.5 million / £21 million, a record price for the artist at the time. On 24 June 2008 in London, Le bassin aux nymphéas, 1919, sold for £41 million / $80.5 million establishing a world record price for the artist, and for any Impressionist painting sold at auction. Dans la Prairie joins this exceptional series of groundbreaking Monet oils, and is equally rare and impressive. Offered from the same important European Collection is L'abandon (Les deux amies) by Henri de Toulouse-Lautrec (1864-1901), one of the finest works by the artist to be offered at auction. Painted in 1895, this suggestive, intriguing and intimate composition has been widely exhibited and published, and has been present at all of the major retrospectives of the artist. By 1895, Toulouse-Lautrec had gained great assurance in his painting, having received praise both for his exhibitions, and for the posters that he designed which remain iconic to this day. Having been born into one of France’s oldest aristocratic families, Toulouse-Lautrec pursued a relatively decadent lifestyle, consciously exploring new existential and artistic boundaries away from the bourgeois mainstream. His acute, observant eye portrayed the society of the Parisian demi-monde in all its diversity.

Toulouse-Lautrec became a friend and confidant to many of the women who worked at his favorite establishments, and they would often become the subjects of his paintings, especially as he sought to paint only the people who captured his interest and fascination. Thus many of the artist’s brothel pictures offer a personal, intimate and insightful glimpse into the very real and personal life of one of France’s greatest artists. The present work was formerly in the ownership of the distinguished publisher, patron, author and philanthropist Sébastien-Paul Gallimard, the father of Gaston, who founded the publishing company that bears his name. The painting was subsequently owned by Max Liebermann, one of the most influential artists of the 20th Century and the founder of the Berliner Secession. It is expected to realise £5 million to £7 million. Les couturières by Edouard Vuillard (1868-1940) is one of the seminal Nabi masterpieces which was painted when the artist was just 21 years old (estimate: £5.5 million to £7.5 million). Offered from a Private Swiss Collection, the picture’s significance is reflected in its exhibition history, which has seen it travel to The Museum of Modern Art, New York; The Los Angeles County Museum of Art; The Museum of Fine Arts, Houston; The Royal Academy, London; and more recently, to the National Gallery, London, where it was on loan from June 2007 to September 2008.

During the 1890s, Vuillard was one of the small group of artists based in Paris who formed the Nabi movement. Deeply influenced by the work of Paul Gauguin, they used bold colour, clear line and direct perspective and developed a distinctive style which proved influential to many of the major modernist movements that followed, including Fauvism and Expressionism. The present work depicts the artist’s mother and sister at work in the corset and dress-making atelier that Mme Vuillard ran in the family home. 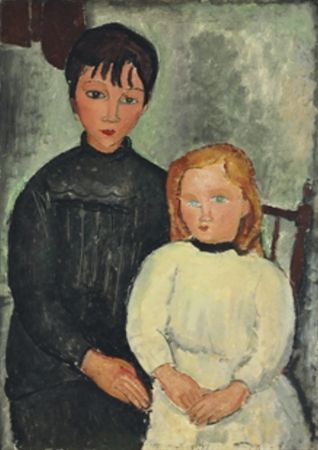 Les deux filles is a rare double portrait by Amedeo Modigliani (1884-1920) which is offered at auction for the first time having been in the same family collection for over 90 years. Preserved in its original unlined condition, the present work is one of only five recognized double portraits by the artist, and is expected to realise £3.5 million to £5.5 million. Three of the other four double portraits are in major public collections; The Art Institute of Chicago, The Centres Georges Pompidou, Paris, and The National Gallery of Art, Washington D.C.

The beautiful painting portrays two girls sitting side by side; the elder girl also appears in an individual portrait by the artist now in the Kunstmuseum Basel. Modigliani used his portraits to seek a visual window into the soul, and the present work highlights the contrast of age and life experience of the two sitters.

Les deux filles was first acquired by Leopold Zborowski, the artist’s dealer, who had financed Modigliani’s lifestyle and paid for his materials in return for all his paintings since 1916. It was subsequently selected and acquired by Jonas Netter, one of the greatest collectors of the artist's work during his lifetime, and it has since passed by descent. La Promenade d'Argenteuil by Claude Monet (1840-1926) was painted in 1872, soon after the artist had moved to Argenteuil in December 1871 and two years before the first exhibition of the Impressionists in Paris in 1874. This was a golden period in Monet’s life and career; the artist had found some financial success and had moved to the town with his wife Camille and their son, Jean. The landscape around Argenteuil on the banks of the River Seine presented the perfect inspiration for the artist who consolidated his theories on painting and nature and developed the style which became known as Impressionism.

The present work was painted on the banks of the Seine with the Ile Marante on the left of the picture and a manor house in the distance. A plume of smoke rises from a chimney which sits beside the traditional manor, as the then modern industrial age contrasts with the landscape of old. Monet has painted the smoke freely, portraying the landscape with a natural reality which shuns any confected ideal. The present works is one of a series of four painted by Monet in 1872, with other examples now in the National Gallery of Art in Washington and the Musée d’Orsay in Paris. The present example is expected to realise £3.5 million to £5 million.

The Art of the Surreal will be represented by approximately 40 works in tightly edited themed sections accross the auctions of Impressionist and Modern Art Evening Sale, Impressionist and Modern Art Day Sale, and Impressionist and Modern Works on Paper. The leading highlight is Le Rêve (Le Baiser), a sculpture by Julio González (1876-1942), a lifelong friend of Picasso, which is expected to realise £400,000 to £600,000. Further highlights include Jeux de mains by Paul Delvaux (1897-1994) which was painted in 1951 and which is expected to realise £400,000 to £600,000, and Femme entendant chanter le coq aux éclats violets, 1972, by Joan Miró (1893-1983) which was given by the artist to the present owner and which will be offered at auction for the first time (estimate: £500,000 to £700,000).