LONDON.- Christie’s Post-War and Contemporary Art Evening Sale will take place on 11 February 2009 and will offer a comprehensive selection of 31 works of art representing the last 60 years. The auction is led by Man in Blue VI, an exceptional portrait by Francis Bacon (1909-1992) which is offered at auction for the first time having been in the same ownership for nearly 40 years (estimate: £4,000,000 to £6,000,000). The auction will offer a number of rare opportunities to collectors, as many of the works are offered at auction for the first time; two leading highlights include important paintings by Alberto Burri and Willem de Kooning which are presented to the market for the first time in more than 40 years. The sale is expected to realise in excess of £15 million.

Pilar Ordovás, International Director and Deputy Chairman of Post-War and Contemporary Art, Christie’s Europe: ‘This auction will offer a carefully curated selection of works by a number of the most established artists of the last 60 years including Francis Bacon, Mark Rothko, Jean Dubuffet, Willem de Kooning, Alberto Burri, Bridget Riley and Jeff Koons, among others. We continue to see strong demand for market-fresh works of the highest quality, and this auction will present a selection of important paintings which are offered for sale for the first time in a generation. The outstanding highlight of the sale is Francis Bacon’s ‘Man in Blue VI’ which is the finest example from an important series of works painted during the mid-1950s, a golden period in the artist’s career. Bacon is recognised internationally as one of the most important and influential artists of the 20th Century and the appearance on the market of this important painting for this first time in nearly 40 years presents a rare opportunity for collectors around the world.’ 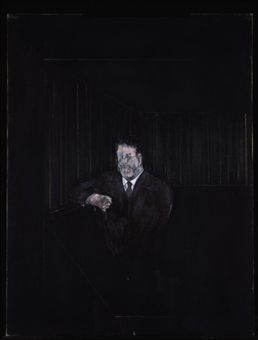 Leading the sale is Man in Blue VI by Francis Bacon (1906-1992) (estimate: £4,000,000 to £6,000,000) which was acquired by the present owner in November 1971 and has been in their possession since. The finest of a series of seven major paintings that Bacon made in the spring of 1954, the present work dates to an intense, creative and much celebrated period in the artist’s career when he was in the midst of a tempestuous and violent romance with Peter Lacy, a veteran Spitfire pilot whom he described as the great love of his life. As Francis Bacon said of his relationship with Lacy, ‘Being in love in that extreme way - being totally, physically obsessed by someone - is like having some dreadful disease. I wouldn't wish it on my worst enemy’. In 1954, as a result of the violent and divisive nature of their mutually destructive relationship, Bacon had moved out of the cottage that he shared with Lacy and was staying at the Imperial Hotel in nearby Henley-upon-Thames. It was during the 1950s that Bacon gained international recognition; his portraits and paintings of Popes were exhibited at museums around Europe and the United States.

The seven paintings depicting Man in Blue are unusual in that Bacon appears to have painted the sitter from life, as opposed to using a photograph which was his usual method. The sitter is an unknown man who Bacon is thought to have met at the hotel in Henley. The work depicts an ordinary figure pulsating with life and apparent inner turmoil at the centre of a dark void. This form of depiction contrasts to that of the screaming agony of the heads and popes that the artist had been painting the previous year, and offers a more subtle representation of personal anxiety and torment. All but one of the series was exhibited at The Hanover Gallery, London in June 1954, and the present example was acquired by the present owner from another London gallery in 1971 and has been in their possession since. It has been exhibited internationally, and was included in the artist’s Retrospective at the Tate Gallery in 1962. Another leading highlight of the auction is Combustione plastica, 1956, by Alberto Burri (1915-1995) (estimate: £800,000 to £1,200,000). Acquired by the present owner in the early 1960s, this elegant work was executed in 1956 and presents one of the artist’s favoured media, plastic, with the favoured technique; fire. During the Second World War while serving as a doctor in the Italian army, Burri was captured in North Africa and sent as a Prisoner of War to a camp in Texas. After his release at the end of the War, he began to draw on materials and techniques expressing the relationship between nature and modernity. The elegance of his art, which used unconventional mediums and was influenced by the horrors he had witnessed, earned him great international recognition, and inspired the Arte Povera movement. Monkeys (Ladder), 2003, by Jeff Koons (b.1955) is offered at auction for the first time and is expected to realise £1.4 million to £2 million. Painted with oil on canvas and standing over 9 feet tall, Monkeys (Ladder) forms a part of the artist’s Popeye series. Two inflatable monkeys at the forefront of the painting suggest innocence, but are set against a naked female torso - the innocence of youth contrasted against the sexuality of adulthood. The subjects are surrounded by fractions of fences, continuing the artist’s campaign against restrictive, traditional barriers of shame, of taste and of prudishness. The painting is offered from an important American collection. Green, Blue, Green on Blue, 1968, by Mark Rothko (1903-1970), another leading figure of the Abstract Expressionist movement, is expected to realise £2.5 million to 3.5 million. In 1968, shortly after completing his masterpiece commission of 14 works for the de Menil non-denominational chapel in Houston, Rothko suffered a massive aneurysm and, having recovered, his doctor advised him not to work with oils or on works more than 40” in height. The artist re-immersed himself in painting and began to explore the medium of acrylic. Inspired and driven by his near-death experience, Rothko created an important and celebrated series of meditative, pulsating works with sombre, heavy colours, of which the present work is an important example.