Serenity in Stone: The Qingzhou Discovery @ the Peranakan Museum

Serenity in Stone: The Qingzhou Discovery @ the Peranakan Museum 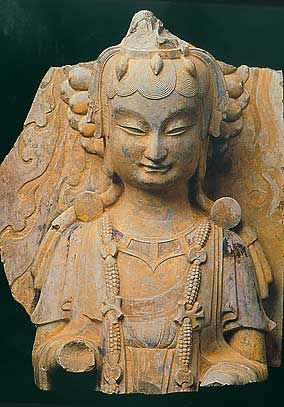 A figure of a bodhisattva from the Eastern Wei dynasty (534-550 CE). photo Royal Academy of Arts, London

Singapore: Travel 1,400 years back in time to the period when Buddhist artwas at its peak in China at Serenity in Stone: The Qingzhou Discovery, the newest exhibition held in the Peranakan Museum. Organised by the Asian Civilisations Museum (ACM), in collaboration with the Art Gallery of New South Wales, this exhibition will be on show from 16January to 26 April 2009. Visitors can expect to see 35 of the best preserved and most exquisite sculptures from Qingzhou, Shandong Province, northeast China, set in a serene and calming ambience.

The discovery of these sculptures took place in 1996, when construction workers were levelling the ground to build a school sports field. Over 400 limestone sculptures dating back to the 6thcentury CE during the Northern Wei, Eastern Wei and Northern Qi dynasties were found in a pit measuring 8.7 by 6.8 metres, and 2 metres deep. Archaeologists found that the sculptures were carefully buried, as though it was part of a ritual – however the reason for their burial stillremains a mystery. The sculptures had lain undisturbed for over 800 years, and many still retain traces of paint and gold leaf, which gives us an idea of the splendour of their original decoration.This “accidental” find has become one of the more significant archeological finds of the 20th century.

Dr. Kenson Kwok, Director, ACM said, “I was first captivated by these sculptures some ten years ago when I was in Beijing at a time when a large number of pieces from the Qingzhou discovery were on display in a special exhibition at the National History Museum in TiananmenSquare. I thought then that it would be wonderful to exhibit these pieces in Singapore someday.This dream has now come to fruition. You do not have to be a Buddhist to appreciate theoutstanding aesthetic qualities and exquisite beauty of the Qingzhou sculptures. They are among the most beautiful sculptures ever produced by the Chinese in their long history.”

The exhibition is displayed to showcase the distinctive features of Buddhist art during the Northern Wei, Eastern Wei and Northern Qi dynasties. During the late Northern and Eastern Wei dynasties (386 - 550 CE), the facial features of Buddha were more Chinese-like with anoblong-shaped face and almond-shaped eyes. Buddha’s image was also usually the centralfigure of a group of three figures set in front of a mandorla (leaf-shaped background symbolizingthe holiness of the group).

Buddhist influences from India reached Shandong from the Silk Road as well as the sea route via Southeast Asia. It was an important centre of Buddhist religious activity in the eastern part of China. The influences are reflected in the sculptures which feature Buddha in a more naturalistic pose and as an independent image from the Northern Qi period. Highlights of the exhibition include a 3.1m high stele with a Buddha and two Bodhisattvas, which weigh more than a ton.This largest sculpture in the exhibition is one of the most powerful devotional images from the Northern dynasties (286-581 CE) in Shandong. Stylistically, the figures in this stele have elements of both the Northern Wei and Northern Qi periods. The full face, solid torsos and robes with minimal linear folds suggests a new interest in the body, but the placement of the figures the dragon/lotus pedestals and the apsaras (celestial beings) at the edges of the mandorla are typical of the earlier Northern Wei style.

“Installing the largest sculpture of the exhibition was the biggest challenge for the team, as it took physical strength, time and accuracy to piece the six segments together. The finished sculpture is well worth all the hard work, as we all stood around in front of its imposing presence upon completion,” commented Ms. Tan Huism, Deputy Director of Curation and Collections, ACM.

Serenity in Stone: The Qingzhou Discovery will be exhibited at the Peranakan Museum from 16 January –26 April 2009. Admission charges are S$8 for adults and S$4 for senior citizens and full-time students. A seated figure of a Buddha from the late Northern Qi dynasty. photo Shandong Provincial Museum A detail of a pensive figure from the Northern Qi dynasty (550Ð77 CE). photo Royal Academy of Arts, London A standing figure of a Buddha from the Northern Qi dynasty (550-77 CE). photo Shandong Provincial Museum