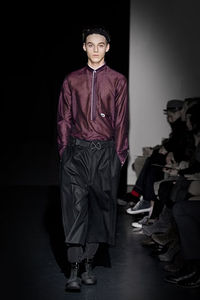 Stefano Pilati once again made it perfectly clear how he'd like people to regard the menswear he designs for Yves Saint Laurent, except this time he sensibly offered a fashion show as well as a short movie. The cameraman for Inez van Lamsweerde and Vinoodh Matadin's film, Your Skin Against My Skin, was Harris Savides, who usually works with Gus Van Sant. And the "star" was Michael Pitt, another Van Sant alumnus. The film itself to had the opacity of one of Van Sant's less commercial efforts, or one of Warhol's screen tests (or maybe even his notoriously suggestive Blow Job), Pitt's face in tight close-up while a female voice murmured on the soundtrack about the new collection. Fashion as aperitif for sex ("I fondle your gray flannel," the mystery woman hummed) has never been so overtly addressed in the context of catwalk, which only made it more discombobulating when the clothes themselves arrived.

Despite materials as sensual as crocodile, cashmere, and crepe de chine, the uniformly dark layers and samurailike proportions had an austere, monkish air. Wide pants were cropped mid-calf over leggings, the volume of sleeves was exaggerated, the crepe-soled footwear had the moon boot-ish look of a Japanese construction worker's traditional footwear. And white poplin shirts were starched to a stand-up stiffness. In other words, after the erotic manifesto delivered by the movie, there wasn't much about the clothes that said "Take me home and bang me silly." What really came across was a male counterpart to Pilati's groundbreaking women's collection from last fall. It took a while for that radical gesture to be absorbed. Perhaps the same thing will apply here.— Tim Blanks www.menstyle.com

YSL creative director Stefano Pilati again unveiled a short film along with his latest collection, this one directed by Inez van Lamsweerde and Vinoodh Matadin and starring Michael Pitt.