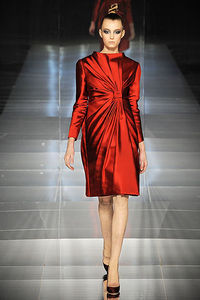 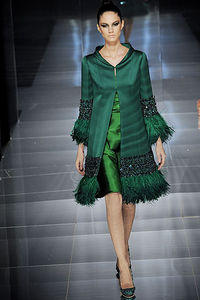 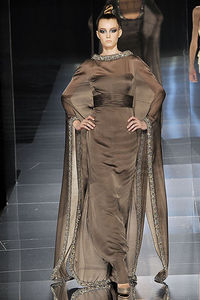 Following the not entirely elegant dismissal of Alessandra Facchinetti after two short seasons and the promotion of the accessory team as her replacements, the house of Valentino needs to regain its sense of equilibrium. Maria Grazia Chiuri and Pier Paolo Piccioli had backup on their first outing as haute couturiers. The retired Valentino Garavani and his entourage descended into the arena (a grand domed lecture theater in the Sorbonne) to endorse the debut, taking their ringside seats amid the kind of applause that might have once been accorded to a Roman emperor.

What the new duo showed was a respectful collection that returned Valentino to all its familiar bases. If not exactly literal throwbacks, the cream suits with stand-up sixties collars, fan-pleated coats, draped red dresses, and stately bejeweled ensembles of crystal-embroidered coats over chiffon spelled La Dolce Vita, loud and clear. It was all very cautious, and so very ladylike that today's skinny young models looked strangely out of place in such womanly designs. On the other hand, this was only the first outing for the Chiuri-Piccioli team, and a rush to judgment on any new designers should be resisted until they've had a chance to settle into their responsibilities. Moving forward and finding relevance for the brand in ready-to-wear is their next task—and their first attempt at that will be under the microscope in a matter of weeks. For the moment, though, a cooling down of the drama around this house is the best that can be hoped for, and as Valentino moved backstage to congratulate his protégés, he looked pleased enough with what they'd done. By Sarah Mower www.style.com 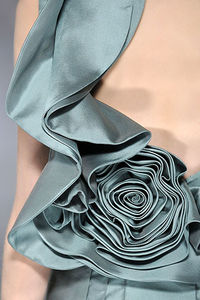