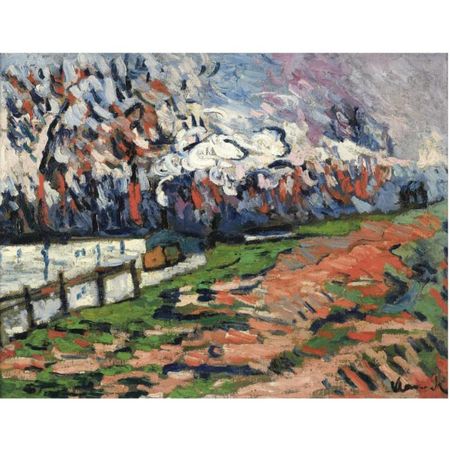 NOTE: Many of Vlaminck's Fauve masterpieces were views of the river Seine, the tugboats, barges, yachts, bridges and towpaths seen at Charon, Bougival and Argenteuil. The present work was painted in 1906 on the banks of the Seine on the outskirts of Paris. Vlaminck rarely left this region during his Fauve years, preferring its surroundings along the river over the busy life of the capital, or landscapes of the south of France, favoured by Matisse, Derain and Braque. He drew inspiration for most of his early landscapes from this region, and later in his life proclaimed: 'All these places that I knew so well, the Seine with its strings of barges, the tugs with their plumes of smoke, the taverns in the suburbs, the color of the atmosphere, the sky with its great clouds and patches of sun, these were what I wanted to paint' (quoted in J. Freeman, The Fauve Landscape (exhibition catalogue), The Los Angeles County Museum of Art, Los Angeles, 1990, p. 148).

Maïthé Vallès-Bled wrote about the present work: 'Most often titled either Landscape with a Boat or Landscape with a Barge, this work in fact depicts two tugboats in convoy though they cannot be seen immediately. The wreathes of thick white smoke that spread behind them merge with the tall trees lining the bank in an exuberant abstraction. The only vertical elements are provided by their trunks, brightened with long vermilion touches, that present a series of markers along the riverbank. A similarly abstract touch is seen in the strongly climbing, diagonal foreground. A weave of conflicting complementary colours counters the force of the contrast created in the background by the primaries red and blue' (M. Vallès-Bled, op. cit., p. 334). Executed in 1906, Remorqueurs sur la Seine exemplifies an important stylistic shift in Vlaminck's painting that took place during this period. While displaying a colouristic boldness characteristic of his Fauve works, particularly in the fierce red and pink hues in the foreground, the predominantly blue palette used in the upper half of the composition heralds Vlaminck's 'Cézannesque' period that would dominate in the years to come.