"Masterpieces of Ancient Jewelry: Exquisite Objects from the Cradle of Civilization" @ The Field Museum

"Masterpieces of Ancient Jewelry: Exquisite Objects from the Cradle of Civilization" @ The Field Museum Bust of a King, Kish East, Sasanian Period (AD 224 - 637), The Kish Expedition excavated seven buildings whose walls were embellished with elaborate stucco decoration. The figure shown here is that of a Sasanian king, identified by his crown as either Shapur II (A.D. 310-379) or Bahram V (A.D. 420-438).

The Field Museum is pleased to partner once again with the National Jewelry Institute, organizers of Masterpieces of Ancient Jewelry. This prestigious exhibition features artifacts from renowned collections of the Metropolitan Museum of Art, the Princeton University Art Museum and the Israel Museum. In addition to the breathtaking jewelry, the exhibition features maps and illustrations that place the jewelry in historical and cultural context.

Additionally, several key pieces from The Field Museum’s collection will be on display complementing the exhibition. The Field Museum’s remarkable collection of 23,000 artifacts from the 5,000-year-old city of Kish, Iraq has been viewed and studied by scholars worldwide. These pieces were excavated between 1923 and 1933 by scientists from both The Field Museum and Oxford University. From at least 3200 BC through the 7th century AD, Kish held an extraordinary position in Mesopotamian history.

This exhibition is free with paid general admission to The Field Museum. Ticket prices can be found online at www.fieldmuseum.org/plan_visit. Gold ring with nephrite sealstone, Iran, 15th to early 16th century C.E. This signet ring is engraved on both the bezel and the seal. 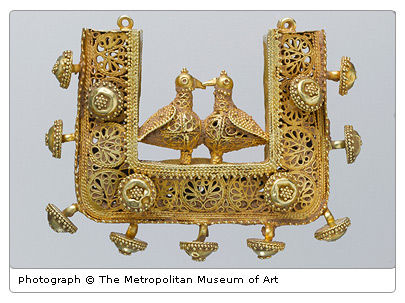 Gold pendant with pair of birds. Greater Iran, 11th to 12th century C.E. The Garden of Eden plays an important part in Islamic jewelry, with birds being the central theme. Here we see a pair of birds touching at their beaks and chests as they stand on their tiny feet in the middle of this pendant Carnelian and gold necklace. Deir el-Balah, 13th century B.C.E. This necklace consists of 244 carnelian and gold beads and wedjat eye amulets. The center gold spacer is decorated in the repoussé technique; it depicts an image of the goddess Hathor, the goddess of love and joy.

Commentaires sur "Masterpieces of Ancient Jewelry: Exquisite Objects from the Cradle of Civilization" @ The Field Museum