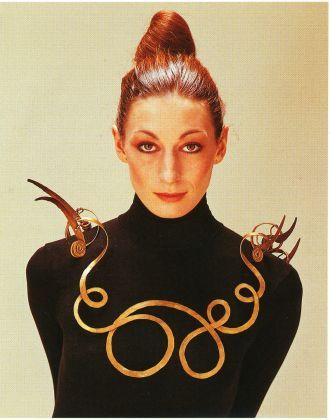 DUBLIN.- The first exhibition devoted exclusively to the remarkable jewellery created by the American artist Alexander Calder (1898-1976) opens to the public at the Irish Museum of Modern Art on Wednesday 1 April 2009. Calder Jewellery explores the lifelong output of wearable art pieces made for family and friends by one of the most innovative and influential figures in 20th-century art, best known for his iconic sculptures and mobiles. IMMA is the only venue in Europe where Calder Jewellery is being shown. Also on display is the specially designed BMW Car with which Calder, who trained as an engineer, initiated the company’s Art Car series in 1975, later continued by such famous artists as Frank Stella, Andy Warhol and David Hockney.

Comprising some 100 pieces, including necklaces, bracelets, brooches, earrings and tiaras from the 1920s to the 1960s, the exhibition is the first in which this aspect of the artist’s practice is explored in depth and on its own. Also included are photographs of prominent people wearing individual pieces, among them Anjelica Huston, Georgia O’Keeffe and Peggy Guggenheim. These give a sense of the pieces when worn and of their popularity in artistic circles.

From his earliest days as an artist, Calder’s practice extended beyond the visual arts into many other creative forms, ranging from household objects and toys to buildings and racing cars. He produced more than 1,800 pieces of jewellery, beginning in 1906 when he found copper wire discarded in the street, which he used to adorn his sister’s dolls. His designs were influenced by the human body, the natural world and pure abstract forms, ranging from animals, flowers and vertebrae to zigzags, spirals and arcs. Each piece is hammered, shaped, and composed in a fashion that echoes the artist’s sculptures. The use of non-precious materials and found objects guided his intuitive technique, from his bohemian years of the 1920s and 1930s to the war years. His jewellery was coveted by followers of the Surrealist movement, and today is still much sought after by collectors and museums.

The light, three-dimensional qualities of Calder’s famous sculptures and mobiles are clearly evident in the kinetic and Surrealist shapes of his jewellery, which also reflects his fascination with adornments across a variety of historical periods and cultures. In the necklace The Jealous Husband, c 1940, and The Necklace, c 1942, and many other pieces, Calder repeatedly incorporated the spiral, a late Bronze Age motif, into his jewellery. Similarly, the influence of African tribal art, an interest he shared with many of his contemporaries, is evident in works such as Belt, c 1935, made with fibres from a raffia palm tree, brass wire and wool. Other pieces spell out the initials of the intended wearer, as in the medallion LJC, c 1938, made for his wife Louisa James Calder, and the brooch SD, c 1960, for his daughter Sandra Calder Davidson.

A film of Calder’s performance work Circus, 1926-31, filmed by Carlos Vilardebo in 1961, is shown as part of the exhibition. This presents an assemblage of wire, leather and found objects fashioned into circus performers by Calder and animated by the artist for dedicated performances in Paris and New York.

Calder’s specially designed BMW car, the first of the company’s Art Car series, will be on display in the grounds of IMMA adjacent to the exhibition. As a sculptor who normally devised his own shapes, Calder managed to free himself from the formal structure of the racing car and created a distinctive design using intensive colours and gracefully sweeping surfaces, again echoing his sculptures and mobiles.

Alexander Calder was born in Lawnton, Pennsylvania, in 1898. He attended classes at the Art Students League, New York, from 1923 to 1926 and made his first wire sculpture in 1925. Calder developed this new method of sculpting by bending and twisting wire – essentially “drawing” three-dimensional figures in space. He is renowned for his striking mobiles, whose suspended, abstract elements move and balance in changing harmony. Calder also made large outdoor sculptures from bolted sheet steel for public buildings and spaces – such as Cactus provisoire, 1967, in Trinity College Dublin – and was a noted book illustrator and stage set designer. He died in 1976 in New York.