COMO.- The Villa Olmo is showcasing eighty works – including oil paintings, tempera works and drawings from leading Russian museums and private collections – tracing the great period of Russian avant-garde art from the beginning of the twentieth century to the early 1930s, with masterpieces by Vassily Kandinsky, Marc Chagall, Kazimir Malevič and Pavel Filonov.

More than 400,000 visitors over five years of exhibitions: this number confirms the success of shows organised by the Como Municipality and dedicated respectively to the great works of Mirò, Picasso, Magritte, the Impressionists, and works held in the Belvedere in Vienna.

The eighteenth-century Villa Olmo is now ready to host, from 4th April to 26th July 2009, a sophisticated show on Russian avant-garde art, tracing the vicissitudes of a great period in art history spanning the beginning of the twentieth century to the early 1930s, seen through masterpieces by Vassily Kandinsky, Marc Chagall, Kazimir Malevič and Pavel Filonov.

Curated by Sergio Gaddi and Evgenia Petrova and organised by the Como Municipality Cultural Office under the auspices of the Lombardy Region (Lombardy Cultural and Heritage Office), the Como Province, the Chamber of Commerce, the Cariplo Foundation, Acsm, and the technical sponsor Menphis spa, the exhibition will present 80 works, including oil paintings, tempera works and drawings, from leading Russian public collections, such as the Saint Petersburg National Museum.

“The decision whether or not to push forward with this great event was carefully considered in light of international events, but after a rigorous weighing up of costs, we decided to go ahead for the strategic good of the city”, asserted Stefano Bruni, the Mayor of Como. “We would have run the risk of losing momentum and continuity, which in this sector can be perilous. I continue to believe in the extraordinary dynamic power of exhibitions to attract the public and thus benefit the territory. This exhibition is yet another outstanding way of showcasing the city, which we want to keep firmly within the loop of art cities”.

The exhibition focuses on the works that Kandinsky, Chagall, Malevič, and Filonov created in the period straddling the First World War – the most dynamic and productive of their careers – in which their revolutionary drive quickly changed to disillusion.

The most intriguing and noteworthy works include Kandinsky’s abstract paintings between 1915 and 1919, such as Two ovals and Overture. Violet border, both from 1919, and the two oil paintings on glass from 1918 entitled Horse rider and Horse rider on the hill.

The exhibition presents more than 20 works by Kazimir Malevič, tracing his overall output. Born in Kiev, Malevič settled in Russia and from the early 1900s his work was influenced by European painting – Impressionism, Post-impressionism and the Nabis – and includes Repose. High Society in top hats from 1908 and Self-portrait from 1910. His work then took on cubo-futurist characteristics, with explicit references to Léger. This was followed by a Suprematist phase culminating in Red square from 1915, and then his late neo-figurative work which developed during the Communist years after the 1917 revolution: a key work from this period is Head of a peasant from 1928-29, selected as the image-symbol for this exhibition at Como.

The masterpieces of Marc Chagall include Self-portrait with palette from 1914, Red Jew from 1915 and The mirror, a captivating and enigmatic painting, also from 1915.

In addition, the exhibition focuses on the work of Pavel Filonov, who is well-known in Russia but not throughout the world. A visionary, lavish and sometimes apocalyptic painter, his works express that combination of mysticism and sensuality that even today represents a distinctive feature of Russian art. This is well represented by the 1914 work, Peasant family. 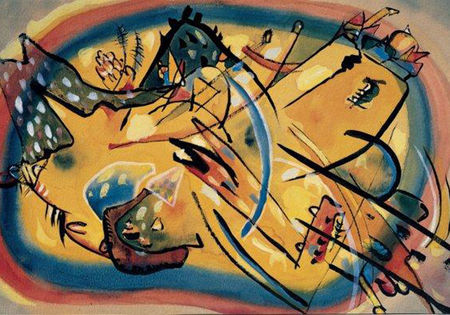