NEW YORK, NY.- Christie's Post-War & Contemporary Art Evening Sale on May 13 will offer fresh to market works from some of the most prominent artists of Post-War and Contemporary Art. The 54 lot sale is expected to achieve $71-104 million.

Robert Manley, Head of Christie’s New York Post-War & Contemporary Art Evening Sale said: “The May 13 Evening Sale will draw collectors with rare and exceptional masterworks that encompass the full spectrum of Post-War and Contemporary Art. Collectors in this market have become more selective and Christie's specialists have carefully edited this sale, and are committed to presenting extraordinary works that are fresh to the market, most of which have been in private collections since their creation.”

Highlighting the Evening Sale is a group of 20 works from the collection of the renowned American philanthropist Betty Freeman. Leading this selection is one of the most important works to come to the auction market by David Hockney, Beverly Hills Housewife, (estimate: $6-10 million), 1966-1967, which immortalizes Freeman and may break the auction record for a work by the artist. A rare, early painting by Sam Francis from 1954 entitled Grey (estimate: $2-3 million), highlights the Francis works in this collection. First exhibited in Dorothy Miller’s seminal 1954 MoMA show, Twelve Americans, the painting was acquired directly from Francis’s private collection by Betty Freeman, who enjoyed a long and close relationship with the artist. The catalogue cover lot, Roy Lichtenstein’s Frolic, 1977, (estimate: $4-6 million), was inspired by his own 1962 painting, Girl with Ball, by ads and comic books, and by one of the greatest painters in art history – Pablo Picasso. In Frolic, Picasso is seen through the filter of Pop, as his celebrated 1932 painting Baigneuse au ballon de plage in the collection of New York’s MoMA is interpreted with an unusual and irreverent twist. Among the master works offered from the Freeman Collection are fresh to market paintings and sculptures by Roy Lichtenstein, Dan Flavin, Alexander Calder, Andy Warhol, Claes Oldenburg, and Joseph Cornell. 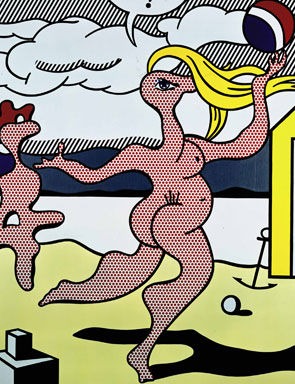 Masterfully executed, Jean-Michel Basquiat’s Mater, 1982 (estimate: $5-7 million), is an electrifying, rare rendition of a female figure within Basquiat’s oeuvre. Representing the raw power of life, the lone figure can be interpreted as both a mother and martyr. Basquiat employs a combination of graffiti, voodoo, and canonic motifs, exploring themes that would ultimately become constants as his career progressed. Reminiscent of its counterpart, Pater, also executed in 1982, this work explores the psychic drama and anxieties about the artist’s life that were ultimately played out in his work. Painted during what many would describe as the apex of Basquiat’s tragically short yet undeniably brilliant career, this work exudes the energy of a young artist at the pinnacle of his creative output. Richard Diebenkorn’s Ocean Park No. 117, 1979 (estimate: $4-6 million), is a consummate work for the artist, luminously illustrating the best qualities of his most celebrated series of paintings. Cultivated over a period of twenty years, the extensive Ocean Park cycle shares a captivating juxtaposition of abstraction and representation, geometry and spontaneity, convention and progression, and yet each work is wholly new, freshly improvised and infused with a particular light and atmosphere of its own. Through his use of bright and cool blues and yellows, the artist communicates the ephemeral quality of nature, capturing the sensation and radiance of the coastal environment in which this work was created. The self-referential, ironic and ingenious, Painting for Kubler by John Baldessari (estimate: $1.5-2 million), belongs to a rare group of groundbreaking paintings that the artist created between 1966-68. Experimenting with the relationship between language and art, Baldessari establishes a discourse between the written and interpreted realms of language and visual imagery, prompting him to become one of the pioneers of the revolutionary movement that set the ground work for text-led art later manifested in the works by artists such as Jenny Holtzer, Richard Prince and Ed Ruscha. For this particular work, Baldessari was inspired by the writings of George Kubler, who defied formalism and postulated the idea that all artworks are bound by shared concepts that may be linked across time. 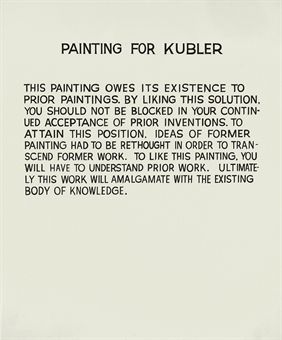 Leading five works in the sale by Andy Warhol is The Last Supper (Camel/57), 1986 (estimate: $4-6 million). At nearly 10 feet long, the painting is a whimsical adaptation of Leonardo da Vinci’s masterpiece in Santa Maria delle Grazie. By juxtaposing the holy scene with the number 57 and an image of a camel, Warhol creates his own unique iconography combining industrial drawing, painting and commercialism.

Among the other notable highlights are two striking masterworks by Jean Dubuffet and Alexander Calder from the private collection of the late Caral Gimbel Lebworth, a prominent New York philanthropist and arts patron who amassed dozens of paintings and decorative objects from the leading artists of the 19th and 20th centuries during her lifetime. Lebworth was the daughter of Bernard Gimbel, late chairman of Gimbel Brothers Inc., which once owned Saks & Co. and Gimbels, the famed New York department store. Originally from the Pierre Matisse Gallery, Jean Dubuffet’s Corps de dame, rose incarnate, executed in 1950 (estimate: $700,000-1,000,000) had later belonged to the important Surrealist artist and patron, Alfonso Ossorio. Dubuffet’s impasto-rich, and playful rendition of a girl represents a recurring motif in his work. There is also a sense of play, of elegance and of innovation in Alexander Calder’s poetic and hypnotic Seven Black on Black, 1956 (estimate: $400,000-600,000). 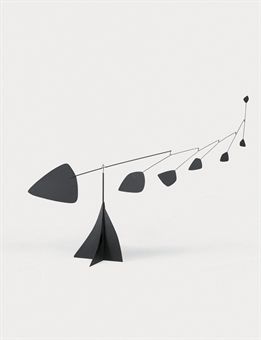 The sale will feature an Achrome, 1958-59 by Piero Manzoni (estimate: $1.8-2.2 million). Considered the enfant terrible of Italian Post-War Art, Manzoni dedicated his illustrious but short-lived career to creating conceptual works that unwaveringly rejected artistic tradition. This work is from the artist’s most important series that employs the claylike substance, kaolin, in which he would soak his canvas then leave it to set in haphazard pleats, inevitably removing the direct hand of the artist from the final product. Highlights by Abstract Expressionist masters include an early, classic drip drawing by Jackson Pollock, Untitled, 1951 (estimate: $400,000-600,000) from the Montclair Art Museum. Also on offer is a dynamic and powerful Woman by Willem de Kooning from 1953 (estimate $1.4-1.8 million), Franz Kline’s Laureline, 1956 (estimate: $3-5 million), and Mark Rothko’s crimson-hued Untitled, 1959 (estimate: $3-4 million), a rare oil painting on paper conceived at the height of the artist’s productivity. 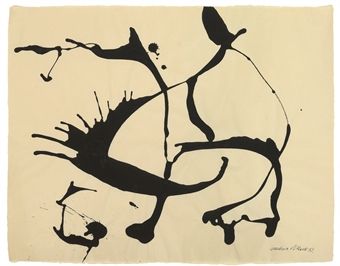 Jeff Koon’s gleaming, Duchampian Jim Beam – J. B. Turner Engine, 1986, ($700,000-1,000,000), belongs to the artist’s Luxury and Degradation series. Koons drew inspiration for the sculpture from a commemorative collector’s bottle in the form of a locomotive issued by the Jim Beam company. He gifted this particular work to the bourbon company to express his appreciation for their cooperation throughout the project’s inception. This work marks the first time Koons would work with stainless steel, a material he would champion and take to new heights in later works. Debuting in the Evening Sale, Kerry James Marshall is represented by his definitive work, Our Town, 1995 (estimate: $500,000-700,000), a work that speaks about American race and identity with the poignant tone that is emblematic of the artist. Within this work Marshall depicts a scene which is equal parts familiar and surreal, presenting an idyllic narrative that is disrupted by the artist’s painterly devices. By utilizing subtle symbolism and a textured canvas, Marshall rids the composition of its illusionary aspects, and draws attention to the artifice put forth by the global perception of American life.