LONDON.- Sotheby's London biannual auction of Fine Chinese Ceramics and Works of Art will take place on Wednesday, May 13, 2009 and will present more than 250 lots of ceramics, textiles, paintings and works of art (ivory, soapstone, jade and bronze), which span from the Han and Tang Dynasties through to Qing. The upcoming sale will be highlighted by a fine Imperial Qianlong period cloisonné enamel and gilt-bronze censer and cover (Estimate: £150,000-200,000), and one of the most extensive and previously unknown collections - assembled by the Late Patrick Huth Jackson - of soapstone, blanc-de-chine and ivory figures to have come to the market in recent times.

Fine Imperial cloisonné enamel and gilt-bronze censer and cover, Qianlong period
One of the most important objects in the forthcoming sale is an Imperial Qianlong period cloisonné enamel and giltbronze censer and cover (lot 37). Cloisonné enamel censers of this magnificent size and outstanding quality are extremely rare and the piece to be offered for sale is a fine example of Imperial enamel craftsmanship of the Qianlong period when cloisonné enameling reached its zenith. Censers of this formidable size and lavish finish were intended to be used both as part of the palace furnishing and also in daily rituals, banquets and Imperial ceremonies. The intricately cast gilt openwork in the form of thousands of auspicious ruyi clouds and bats, symbols of good fortune and luck, was carefully designed to allow the delicate scent of incense to permeate the hall. Every aspect of the design was carefully planned.

The striking nature of cloisonné enamel made it a favorite with the Emperor, a keen follower of Buddhism who saw himself as the religious leader of the empire and was also a keen collector and connoisseur of art. Under his tutelage, artists and craftsmen working in the Imperial Palace Workshops (Zaobanchu), located in the Forbidden City, were encouraged to produce pieces that were innovative, technically challenging and aesthetically eye-catching. The pair to the censer offered for sale was sold at Sotheby’s Monte Carlo in 1984. This remarkable censer, which provides an exciting insight into one of the most creative and remarkable periods in Chinese art, is estimated at £150,000-200,000.

The Collection of the Late Patrick Huth Jackson
The auction is also set to include one of the most extensive and previously unknown collections of soapstone, blanc-de-chine and ivory figures to have come to the market in recent times. This remarkable collection was assembled over a period of 30 years by Patrick Huth Jackson. Jackson, who lived in London, purchased his pieces from major London auctioneers and dealers and kept them hidden from the world in a secret hardwood Chinese cabinet in his home. It was only during Jackson’s last days that he revealed his treasures to his family and requested that the collection be sold at Sotheby’s.

Soapstone has historically been appreciated as one of the most workable materials in China and it was only later, during the Ming and Qing Dynasties, that soapstone became accepted as a valued medium in its own right. This exquisite collection of soapstone figures (lots 1-27) displays the ingenuity and patience of Chinese craftsmen who had perfected their craft and possessed a natural ability to work with this material. A very rare Xingyao octagonal alms bowl, 10th/11th-century
Also included for sale is a very rare 10th/11th-century Xingyao Octagonal Alms Bowl, which combines the seriousness of an exquisitely crafted work of art with the playfulness of a surprise effect, the jingling balls of clay contained within the lions’ mouths. The use of such bowls, of which only very few examples are known, has been debated. It has been suggested that it could either have been created as a washer or mortar, but both equally require stability and it is unlikely that the potters would have gone to the trouble of preventing the small clay balls from sticking if this was not for a specific purpose. It is most likely that the bowl was meant to be carried by a Buddhist monk begging for alms – its high foot making it safe to hold and the jingling sound to alert donors. Such remarkable vessels are extremely rare and were produced for only a very short time by the white ware kilns of Hebei province. The example offered for sale is estimated at £300,000-500,000. A tanka depicting the portrait of Erdeni Palden Yeshe, 18th-century
The auction also presents an 18th-century tanka (painting) depicting the portrait of Erdeni Palden Yeshe (1738-1780), the Sixth Panchen Lama in a monk’s robe with a begging bowl. Erdeni Palden Yeshe was distinguished for his writings and had keen interest in world affairs, and was one of the most influential and worldly lamas known in the Tibetan religious hierarchy – the Panchen Lamas formed the lineage which is said to be the incarnations of Amitabha Buddah. Tankas of this type were generally painted by artists trained in the Tibeto-Mongol tradition, however the tanka offered for sale is unusual for its brush use and subtle colouration. The flowers, rocks and much of the background details are masterfully executed and painted in a naturalistic manner, whilst the face of the Lama is a vivid rendition, suggesting that the piece is possibly the work of a Western artist or someone trained in Western style painting techniques at Qianlong’s court. The painting (lot 84) is estimated at £50,000-70,000. 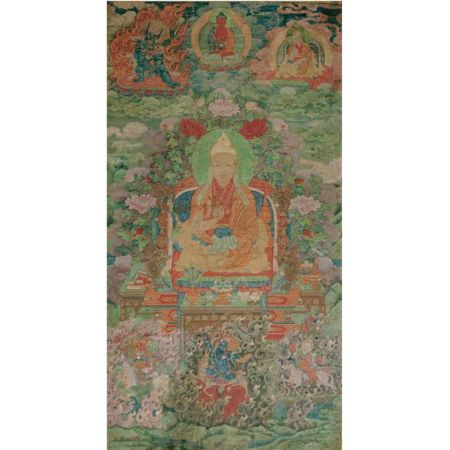 A Rare Imperial painting of the Bannerman, Zha Er Shan, dated 1760, Qing Dynasty, Qianlong period
Another important work in the auction is a rare Qing Dynasty, Qianlong period Imperial painting of the Bannerman, Zha Er Shan - an officer of the Imperial Guard - dated 1760, which includes a eulogy describing the Supervisor-in-Chief of Yuansulun as a courageous and confident warrior whose achievements on the battlefield are laudable. Zha Er Shan distinguished himself in the Eastern Turkestan (Xinjiang 1755-59) campaign. The portrait (lot 136) is number 24 from Group II of the Eastern Turkistan, 2nd Series, painted in 1760 and is estimated at £40,000-60,000. Imperial bannermen paintings such as this were housed in the Ziguange (Hall of Purple Splendour), a hall of fame for immortal heroes located in the West Gardens of the Imperial Palace precincts in Beijing. The vivid and energetic facial expression depicted in a three-quarter view is characteristic of this type of traditional Chinese portrait painting and the thick ink brushstrokes outlining the body and the strong watercolours are typical of 18th-century Imperial academy workshop painting style. A fine and rare gilt-bronze figure of Manjushri, Yongle mark and period
Highlighting the bronzes in the sale is a fine and rare Yongle mark and period, giltbronze figure of Manjushri, the ‘Beautiful and Virtuous Lord’. The work is representative of a group of Buddhist figures made in China in during the reign of the Yongle emperor. It displays a style influenced by the art of Tibet, and was probably made as a gift from the Ming emperor who sought to maintain good relations with the Tibetan religious hierarchy. It is estimated at £200,000-300,000.