"The Bend on Herengracht" on Display @ the Rijksmuseum

"The Bend on Herengracht" on Display @ the Rijksmuseum 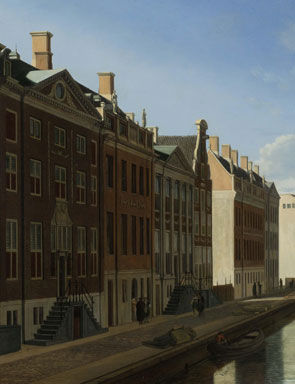 AMSTERDAM.- Starting on Tuesday, 12 May 2009, ‘The Bend on Herengracht’ (1671 72) by Gerrit Berckheyde will makes its debut at the Rijksmuseum. Immediately after its acquisition in September 2008, the painting was featured as one of the highlights of the successful exhibition ‘Pride of Place’ in the Royal Picture Gallery Mauritshuis in The Hague. It was then exhibited at The National Gallery in Washington until 3 May 2009. The painting’s acquisition was made possible thanks to the generous contribution Royal Dutch Shell made to the National Art Fund (Nationaal Fonds Kunstbezit) and to support from the BankGiro Loterij.

Last month, media reports appeared that the American bank JPMorgan Chase claimed rights to the painting. As no legal proceedings were instituted, the painting returned to the Netherlands as scheduled.

The painting by the 17th-century painter Gerrit Berckheyde is one of the finest examples of Dutch city views. It shows the most expensive piece of real estate on Amsterdam’s canals, known for centuries as the Golden Bend. The painting provides a fascinating portrait of one of the most successful building projects of the 17th century. The bright colours and the sharp contrast between the shaded, newly erected urban palaces and the sun-soaked blank walls adjacent to the yet unbuilt sites lend The Bend on Herengracht (1671-72) a serene, timeless, almost modern, abstract quality. Apart from the detail, the painting also has a remarkable narrative quality, making it particularly interesting from both a historical and an art-historical perspective. Commentaires sur "The Bend on Herengracht" on Display @ the Rijksmuseum