"Streams and Mountains Without End: Asian Art and the Legacy of Sherman E. Lee" @ the Cleveland Museum of Art

"Streams and Mountains Without End: Asian Art and the Legacy of Sherman E. Lee" @ the Cleveland Museum of Art CLEVELAND, OH.- Streams and Mountains Without End: Asian Art and the Legacy of Sherman E. Lee at the Cleveland Museum of Art, on view at the Cleveland Museum of Art (CMA) from June 27 through August 23, 2009, is a memorial exhibition honoring the late Dr. Sherman E. Lee (1918-2008). Comprising approximately 50 masterworks of Asian art acquired by the museum during Dr. Lee’s tenure of more than three decades as a curator and director of the CMA, Streams and Mountains Without End pays tribute to one of the most important individuals in the history of this institution and a leading figure in the museum world.

Under Dr. Lee’s leadership, the Cleveland Museum of Art underwent a dramatic transformation—both physically and in terms of the development of its collection—and became one of the most significant institutions of its type in this country. His broad knowledge of the field and insistence on maintaining the highest standards of aesthetic quality are clearly reflected in a collection that is world renowned and has strengths in many different areas. Nowhere is this more evident than in the remarkable holdings of Asian art assembled at CMA during his tenure. The exhibition explores and celebrates Lee’s role in building CMA’s Asian collections as well as his collecting philosophy, taste, and scholarship in the field.

Juxtapositions of selected works in the exhibition clearly demonstrate the visual and stylistic standards that informed Lee’s selection of works of art for the museum, and introduce visitors to subjects, themes, and styles that cut across the large and diverse field of Asian art. Encompassing works of different cultures in a wide range of media, the exhibition conveys the remarkable range of Lee’s aesthetic and scholarly interests as well as his willingness to venture into certain new fields not yet widely recognized as collecting areas by Western connoisseurs. Visitors will come away with an appreciation of Lee’s discerning eye, his foresight, and the collection’s extraordinary scope and quality.

· Streams and Mountains Without End, China, late Northern Song (960-1279 A.D.) or Jin dynasty (1115-1234 A.D.), first half of 12th century. This monumental Chinese landscape was a landmark acquisition of 1953, made just a year after Dr. Lee had returned to Cleveland as curator of Oriental art. It was acquired with the intention to provide a more than adequate foundation for a fine collection of Chinese landscape painting.

· Nikko, the Sun Bodhisattva, Japan, Heian Period (794-1185 A.D.), c. 800 A.D. Identified by the disk at the base of the elaborately dressed hair, Nikko, the Sun Bodhisattva, is carved in a single-block technique (ichiboku), characteristic of early Japanese sculpture and distinct from the joined-block method (yosegi) developed later. The influence of Chinese Tang-dynasty (618-960 A.D.) sculpture was widespread among Central and East Asian countries and is evident in Japanese sculpture from the late 700s and early 800s.

· Buddhist Tabernacle, late 1100s A.D., Japan . This imposing lacquer shrine (zushi) never housed a carved sculptural icon, but was made with shelves (now lost) to hold 300 handwritten religious texts (sutras) which promised redemption for Buddhist worshipers. These lacquer shrines were created with wood, covered with hemp cloth, layered with clear lacquer and then decorated with various paints, ink, pigments and gold leaf, making it unique in the history of Japanese art.

· Mother and Child , India, Rajasthan, Tanesara-Mahadeva, Gupta period, 5-6th century. This image of a mother goddess (matrika) with a child once formed a part of a larger group of figures. The voluptuous goddess holds the child standing at her side by the hand, trying to restrain his playful mood. The semi-smiling expression on her face indicates her affection for the child. Her grace, easy, relaxed posture, and the “psychological” connection between the figures classify it as one of the most compelling mother-and child-representations in Indian art. She could compete successfully with the best representations of later Christian Madonnas.

· Zen Master Hotto Kokushi, Japan, about 1286 A.D. This Japanese sculpted portrait depicts in a cross-legged, meditative pose the revered Zen Master Hotto Kokushi (1203-1295 A.D.), a distinguished Buddhist priest. Known as Kakushin, he traveled twice to China to study Zen Buddhism, then founded and rehabilitated a number of temples in rural Japan , where three sculptural portraits of him are still venerated.

· Green Tara, Tibet , about 1250-1300 A.D. This style of painting shows a strong eastern Indian and, at the same time, Nepalese influence with its vividly colored temple banner made in Tibet during the early civilizations. The Green Tara, a personification of wisdom, was a popular deity because she offered protection and salvation to her devotees. The painting is one of the most accomplished and admired Tibetan paintings in public collections and its importance and artistic value were immediately recognized by Sherman Lee. It was one of his his favorite works.

· Krishna, Cambodia, about 500-550 A.D. This statue represents the Hindu deity Krishna as he lifts Mount Govardhana to provide shelter to his followers from torrential rains and flooding, helping him become known as the savior of mankind. Aside from the great art-historical significance of this image and its rarity (only a handful of images of the early Phnom Da style are known, most of which are in the Phnom Pen Museum in Cambodia ), in purely esthetic terms it is one of the sculptural masterpieces of the world.

Dr. Sherman E. Lee
Born in Seattle , Wash. , Dr. Sherman E. Lee received both his bachelor’s and master’s degrees from American University , and a doctoral degree from Case Western Reserve University . Lee joined CMA in 1952 as curator of Oriental art and was promoted as the museum’s third director in 1958, a position he held through 1982. He had a passion for Asian art, and under his tenure as both curator and director, helped to build a world renowned collection at CMA.

Lee was internationally known and revered for his many books including A History of Far Eastern Art, profiling exhibitions and leadership within the museum world. In addition to serving as director of CMA, Lee served as curator of Far Eastern art at the Detroit Institute of Art, associate director of the Seattle Art Museum ; led the Japan Society, Asia Society, and The China Institute; and served as adjunct faculty in the art history department at Case Western Reserve University . Before his death, Lee was an adjunct professor of art history at the University of North Carolina . 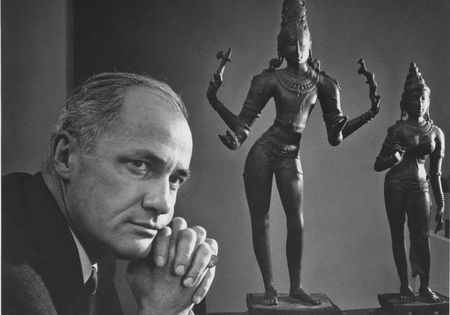 Commentaires sur "Streams and Mountains Without End: Asian Art and the Legacy of Sherman E. Lee" @ the Cleveland Museum of Art