NEW YORK, NY.- Christie’s New York’s Spring 20th Century Decorative Art & Design sale takes place June 2 and will provide an exciting array of engaging and appealing works from all the major movements of the 20th century, exemplifying the most creative and captivating designs that spanned the century. A separate release is available. A highlight of this sale is the superb group of 7 lots featuring architectural elements from Dankmar Adler and Louis Sullivan’s Chicago Stock Exchange Building.

Jeni Sandberg, Christie's Specialist, 20th Century Decorative Art & Design says, “Christie’s prides itself on bringing works of historical importance and cultural relevance to the international art market. We are therefore delighted to offer these remarkable lots, which were designed by Louis Sullivan, one the great creative geniuses of American Architectural history, in our upcoming 20th Century Decorative Art and Design Sale June 2, 2009.”

Louis Sullivan and the Chicago Stock Exchange Building Widely acknowledged as one of the 20th century’s most important and influential American architects, Louis Sullivan is considered by many as “the father of modern architecture.” Espousing the influential notion that “form ever follows function,’ Sullivan redefined the architectural mindset of subsequent generations. Despite this seemingly stark dictum, Sullivan is perhaps best known for his use of lush ornament. Natural forms were abstracted and multiplied into until recognizable only as swirling linear elements. In 1893 Sullivan and his partner Dankmar Adler earned the commission of the Chicago Stock Exchange Building located on Lasalle Street. The first floor and second floor’s main trading room was the centerpiece of the building and received the most attention. Richly colored and densely patterned, the trading room was a broad, open space as dictated by its use. Stenciled panels and leaded glass skylights created a canopy of color over the room.

The Stock Exchange itself moved out of the building after only fourteen years and the structure underwent numerous subsequent renovations. After much public outcry, the Chicago Stock Exchange was demolished in 1972. Just as the 1964 demolition of Pennsylvania Station spurred preservation efforts in New York, the loss of the Chicago Stock Exchange building was one of the events that raised awareness about preserving the architectural heritage of the city. Luckily, the Art Institute of Chicago installed the majority of Trading Room and the massive entrance arch to the Stock Exchange so that future generations could appreciate this master work of Sullivan’s career.

The extraordinary works symbolize the elegance of the Chicago architecture movements are featured in this collection (lots 4-18) of architectural elements from various buildings in Chicago and elsewhere by Chicago architects. Among the offerings from the Stock Exchange Building, circa 1893 by Dankmar Adler and Louis Sullivan are a Cast and Wrought-Iron Elevator Enclosure Panel (estimate: $20,000-30,000); a Stenciled Frieze Panel (estimate: $20,000-30,000), and three Leaded Glass Panels (estimate: $7,000-10,000). 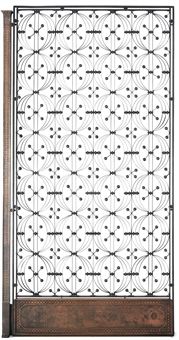 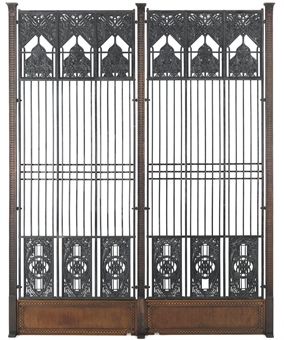 The sale will also feature two lots by Louis Sullivan from the original Schlesinger and Meyer Store in Chicago, now the Carson, Pirie, Scott and Co. building, including a copper-plated cast iron medallion (estimate: $5,000-7,000) and a cast-iron stair baluster (estimate: $4,000-6,000). Frank Lloyd Wright
Another notable highlight are three pairs of windows by Frank Lloyd Wright for Francis W. Little house (estimate: $15,000-20,000) in Wayzata, Minnesota. Commissioned in 1908, the project was not constructed until 1913-1915. Wright wished to explore his ideas and inspirations on the house after having traveled to Europe and Japan, but was constrained by the Littles, who still wanted a typical Prairie-style house. Little specified only that he did not want green in the windows and the end result was a sophisticated design in colorless and white glass, with only a small red square at the bottom of each window. The house was demolished in 1972, however sections of the house are installed in the collections of the Allentown Museum of Art and The Metropolitan Museum of Art.