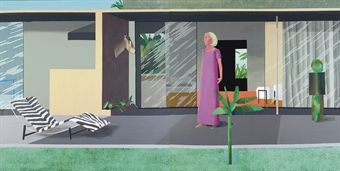 “Tonight’s strong sell-through rates signaled a clear and resounding vote of confidence in the market from a deep pool of collectors around the world, vying for almost every lot in the sale. With 30 lots selling for over the $1 million mark and five new world auction records, the results show there is continued readiness to compete for rare and high-quality works, especially those from estates, museums and private collections,” said Marc Porter, President Christie’s Americas.

Leading the Evening Sale was a group of 20 works from the collection of the renowned American philanthropist Betty Freeman which was 90% sold by lot and achieved a combined total of $31,606,500. One of the most important David Hockney works to come to the auction market, Beverly Hills Housewife, 1966-1967, achieved the evening’s top price of $7,922,500, and set a new world auction record for the artist. Typewriter Eraser, a work that epitomizes Claes Oldenburg's revolutionary approach to sculpture sold for $2,210,500 and set the second auction record of the night. The catalogue cover lot, Roy Lichtenstein’s Frolic, 1977, fetched $6,018,500, followed by a rare, early painting by Sam Francis from 1954 entitled Grey, which achieved $3,666,500. First exhibited in Dorothy Miller’s seminal 1954 MoMA show, Twelve Americans, the painting was acquired directly from Francis’s private collection by Mrs. Freeman, who enjoyed a long and close relationship with the artist. Douglas Wheeler’s Untitled, 1968 set a new world auction record for the artist, selling for $290,500. Rounding out the Freeman collection was Alexander Calder’s Gypsophila on Black Skirt, 1950, a coveted work that witnessed strong bidding, sold for $1,986,500. Richard Diebenkorn’s Ocean Park No. 117, 1979, a consummate work for the artist, which luminously illustrates the best qualities of his most celebrated series of paintings, achieved $6,578,500, just shy of the artist’s auction record of $6.76 million. Through his use of bright and cool blues and yellows, the artist communicates the ephemeral quality of nature, capturing the sensation and radiance of the coastal environment in which this work was created. Masterfully executed, Jean-Michel Basquiat’s totemic Mater, 1982, an electrifying, rare rendition of a female figure was acquired for $5,850,500. Painted during what many would describe as the apex of Basquiat’s tragically short yet undeniably brilliant career, this work exudes the energy of a young artist at the pinnacle of his creative output. The auction yielded particularly strong results for the other works by Alexander Calder in the sale, including a rare wall relief, Untitled, 1943 which realized $2,826,500 and the poetic and hypnotic Seven Black on Black, 1956 from the private collection of prominent New York philanthropist and arts patron, the late Caral Gimbel Lebworth, which totaled $1,142,500. A second Post-War highlight from that collection, Jean Dubuffet’s Corps de dame, rose incarnate, executed in 1950 achieved $1,762,500. Highlights by Abstract Expressionist masters performed well, including an early, classic drip drawing by Jackson Pollock, Untitled, 1951, which fetched $506,500, a dynamic and powerful Woman by Willem de Kooning from 1953, which achieved $3,666,500, and a vibrant and refreshing work by Hans Hofmann, Wild Vine, 1961 that totaled $1,202,500. Jeff Koon’s gleaming, Duchampian Jim Beam – J. B. Turner Engine, 1986, achieved $2,322,500 after a spirited round of bidding. Koons drew inspiration for the sculpture from a commemorative collector’s bottle in the form of a locomotive issued by the Jim Beam company. This sculpture marks the first time Koons worked with stainless steel, a material he would champion and take to new heights later in his career. 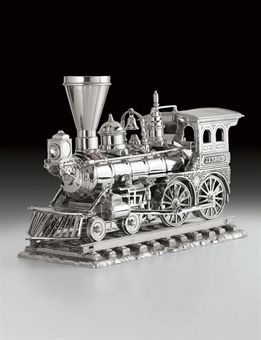 Debuting in the Evening Sale, Kerry James Marshall’s definitive work, Our Town, 1995, achieved $782,500, setting a new world auction record for the artist. The work is equal parts familiar and surreal, presenting an idyllic narrative of life that is disrupted by the artist’s painterly devices, and draws attention to the artifice put forth by the global perception of American life. 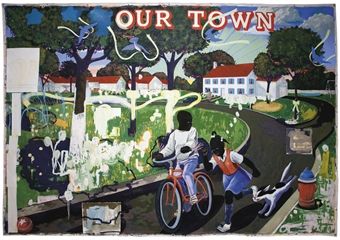 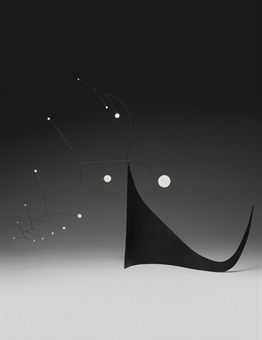