NEW YORK, NY.- David Seidner: Paris Fashions, 1945 presents photographs of a collection of couture-clad dolls made for the Théâtre de la Mode, a wildly creative effort by the French fashion industry to broadcast to the world that they were back in business after World War II. In 1990, contemporary fashion photographer David Seidner (1957–1999) was asked to photograph the dolls for a reconstruction of the original project. Through September 6, 2009, fifteen of these color photographs from the David Seidner Archive, along with one of the original dolls, are view at the International Center of Photography.

After the liberation of 1944, the French couture industry was badly weakened. Shortages of food, electricity, and supplies brought production to a virtual standstill. During the Occupation, strict fabric rations were imposed on the couture houses, which faced the constant threat of foreclosure. To help revive the international stature of the business, the Chambre Syndicale de la Couture Parisienne conceived of a small exhibition, Théâtre de la Mode. With limited access to materials, the organizers commissioned wire-frame dolls just over two feet tall as the models and invited the major fashion designers of the day, including Balenciaga, Jacques Fath, Lucien Lelong, Elsa Schiaparelli, and Pierre Balmain, to create exquisite miniature dresses.

The exhibition of over 230 dolls, displayed in artist-designed sets, opened in Paris on March 27, 1945 in the Pavillon Marsan at the Musée des Arts Décoratifs. The international creative talent involved in the project included the Frenchmen Jean Cocteau, Christian Bérard, and Éliane Bonabel; the Russian Boris Kochno; and the Catalan Joan Rebull. The show was an instant sensation, and traveled to London, Barcelona, Copenhagen, Stockholm, Vienna, New York, and, finally, San Francisco. Within the year, the French fashion industry had been revived. The dolls had completed their work spectacularly and were donated to the Maryhill Museum near Portland, Oregon, where they disappeared from public view.

In 1990, the dolls were rediscovered and returned to Paris, where they were recoiffed and restyled for an exhibition at the Musée de la Mode. Because of his pioneering work photographing French fashion and historical gowns, David Seidner was asked to photograph the little dolls. In his images, Seidner captures the essence of French postwar style. The rough, abandoned sets he used echoed the backdrop of the original exhibition, and also stand in for the environment in post-Occupation Paris. Like the postwar fashion photographs made in front of bombed buildings, the coiled ropes, splintering wood, shards of glass, and exposed wire in Seidner’s photographs attest to the precariousness of life and fashion at the time, and underscore the courage and spirit of the people who persevered.

David Seidner (February 18, 1957–June 6, 1999) was born in Los Angeles and worked as a photographer for twenty-five years, spending much of his time in Paris. Among the world’s top fashion photographers, he was perhaps best known for his work with the fashion house of Yves Saint Laurent, his striking formal portraiture and nude photographs, and for his orchid series, the final project before his death in 1999. His artwork and portraiture were largely inspired by the chance-based philosophy of composer John Cage, whose work considered the classical Chinese book the I Ching as the basis for musical pieces. 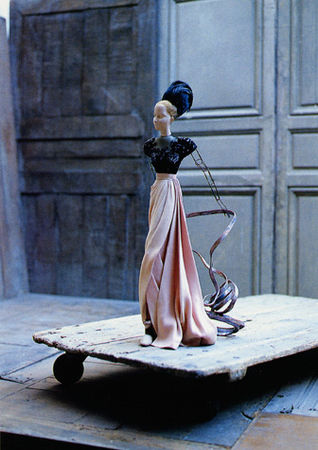