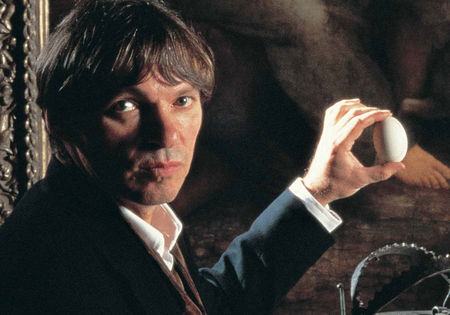 With this exhibition Dimitrijević further develops his original concept of Post History formulated in his book Tractatus Post Historicus (1976). The artist defines Post History as “a time of coexistence of different values and models, a time of multi-angular viewing, a space without one final truth.” Dimitrijević questions the criteria according to which historic values are constructed, emphasizing the accidental and the subjective interpretations of facts, thus introducing a variety of coexisting truths, models and pluralities of subjectivities. As expressed in the statement “There are no mistakes in history, the whole of history is a mistake”. Dimitrijević’s concept of Post History marks his entire artistic philosophy since the 1960s. From the very beginning, the artist rebelled against historic, social and artistic reality. Instead, in Future Post History he offers poetic interpretation as an alternative to historical thinking.

The exhibition at Ca’ Pesaro will also portray the accomplishments of the Ars Aevi Museum of Contemporary Art in Sarajevo. This segment of the exhibition presents the Ars Aevi Collection, the work of a strong international network of esteemed artists, curators, institutions of contemporary art, architects, governmental and non-governmental organisations, administrations and other individuals who have formed their collection in Sarajevo. This valuable international collection, made unique by its original development concepts and strategy, will be housed in the Museum designed by one of Ars Aevi’s founders, architect Renzo Piano, whose original designs will be presented at the exhibition.

“Braco Dimitrijević: Future Post History, organised by Ars Aevi, is a case of history repeating itself, coming full circle. Namely, the first official international promotion of the concept and strategies of the Ars Aevi Project was organised during the second year of the siege of Sarajevo, in June 1993, in Venice, at the 45th Venice Biennale.

In 2009, at the 53rd Venice Biennale, through this exhibition, Ars Aevi presents the impressive results achieved by the participants of a widespread international network of friends, partners and supporters who believe in the importance and the remarkable moral, aesthetic and development values and goals of the Ars Aevi Project.” said Enver Hadziomerspahić, Ars Aevi General Director.

As a result of its longstanding close cooperation with the City of Venice, Ars Aevi has obtained for the Braco Dimitrijević: Future Post History exhibition two very attractive spaces in which the artist’s works can be fully appreciated. Ca’ Pesaro, a Baroque mid 17th century marble palace facing the Grand Canal where Venice’s Museum of Modern Art is located will be the site for Dimitrijević’s grand new large scale installation and video works.

Also located on the Grand Canal, in the vicinity of the Rialto bridge, is Ca’ Farsetti, the municipal seat, on the façade of which Dimitrijević’s site specific Casual Passer By installation will be exhibited.

“This exhibition at the Venice Biennale is the perfect opportunity to present the role of Dimitrijević’s work in the currents of international contemporary art. The work of this Sarajevo born artist has had a lasting impact on the development of conceptual art since the late 1960s, particularly onto the neoconceptual tendencies of the past two decades. Today, after an illustrious 40 year career, Dimitrijević’s work continues to reinvent itself, remaining a highly significant and provocative re-examination of conformist artistic and social trends.” said Amila Ramović, the curator of the Braco Dimitrijević: Future Post History exhibition.

Braco Dimitrijević is one of the 160 renowned international artists who have, with their works, become the founders of the Ars Aevi Collection for the Museum of Contemporary Art in Sarajevo, designed by Renzo Piano. Founded in 1992, during the siege of Sarajevo, the Ars Aevi Museum of Contemporary Art promotes a belief in the power of art to defeat destruction and a certainty that the universal language of art unites. (“Beauty has a power and every picture turns into energy.”

Braco Dimitrijević (born in Sarajevo, in 1948) is a seminal artist of conceptual art. He had his first one man show in 1958 at the age of 10. From 1968 to 1971, he studied at the Academy of Fine Arts in Zagreb. From 1971 to 1973, he did his post graduate work at St Martin's School of Art in London. In 1978, he received the Prix Jean Dominique Ingres from Académie de Muséologie Evocatoire and that same year was the recipient of a Major Award from the Arts Council of Great Britain. In 1992, he received a Knighthood for Arts (Chevalier des Arts et des Lettres) in Paris. In 2006, he received the ABO d’Oro prize in Rome.

Since the late 1960s, he has been pioneering a concept of interventions in urban landscape through his Casual Passer-By cycle. Fully aware of the social and historical contexts, Dimitrijević exhibited gigantic photographs of anonymous passers-by in important public spaces in the world's metropolises such as London, Paris, New York, Berlin and Sidney. He went on to construct monuments dedicated to individuals whose names are not remembered by History.

Following the ideas of the Tractatus Post Historicus (1976), Dimitrijević developed the Triptychos Post Historicus, installations constituted of three elements: an original masterpiece borrowed from a museum, an everyday object and a fruit of nature. This cycle was carried out at the world’s most important museums including the Musée de Louvre and Musée National d’Art Moderne Centre Georges Pompidou in Paris, Tate Gallery in London, the Guggenheim Museum in New York, the Ludwig Museum in Cologne, with works by Da Vinci, Van Gogh, Mondrian, Malevich.

In 1981, at the Waddington Galleries in London, he created an installation with a painting by Picasso and a living peacock, thus starting his Culturescapes cycle by introducing living animals into museums.

In recent works, the original paintings are substituted for portraits of historical personalities such as Tesla and Kafka, who have achieved an oeuvre of immense importance, but their faces are still almost as anonymous as those of passers-by.

Braco Dimitrijević’s work, as well as his theoretical book were an important influence on two tendencies that dominate artistic discourse today: critical practices in public space and interventions in museum collections.

He has participated in major group shows such as the Kassel Documenta 5 (1972) Documenta 6 (1977), Documenta 9 (1992), several times at the Venice Biennale, Sao Paulo Biennale, Sydney Biennale, as well as the Santa Fe Biennale, Havana Biennale, Kwangju Biennale, Valencia Biennale. He also took part in the exhibition Magiciens de la Terre at the Centre Georges Pompidou in Paris.
The May 2009 issue of Art Press magazine features Braco Dimitrijević on its cover and a full feature interview conducted by the editor Catherine Millet.

Braco Dimitrijević’s comprehensive retrospective is currently being held at the Musée d’Art Moderne in Saint Etienne.