'NAPOLEON AND EUGENIE, The Opulent Splendor of France’s' @ Nassau County Museum of Art

'NAPOLEON AND EUGENIE, The Opulent Splendor of France’s' @ Nassau County Museum of Art ROSLYN HARBOR.- The sumptuous grandeur of France’s Second Empire is celebrated as Nassau County Museum of Art devotes its galleries to paintings, sculpture, decorative objects, memorabilia and historical artifacts that reflect the Imperial Court of Napoleon III and Empress Eugenie from 1852 to 1870. NAPOLEON AND EUGENIE, a major exhibition opening on June 7 and remaining on view through September 7, draws from the notable Collection of Christopher Forbes who regards Napoleon III as “one of the great underrated world leaders.” The exhibition’s showing at NCMA, curated by Franklin Hill Perrell, is sponsored by The Florence Gould Foundation

NAPOLEON AND EUGENIE conveys the story of France during the era of the Second Empire —its personages, its accomplishments, its international relationships and, throughout, the opulence that characterized the royal court of Napoleon III and his Consort Empress. The exhibition also encompasses historical material on the Bonaparte family and the First Empire with many of the works on view consisting of objects that were owned or commissioned by the Imperial family.

Louis Napoleon (1808-1873), the nephew of Napoleon I, returned from exile in 1848 to become the first president of France under the constitution of the Second Republic (1848-1852). In 1852, the Second Empire was overwhelmingly approved with the result that Louis Napoleon became Napoleon III. His rise to the throne ushered in an era of liberal domestic policies and was marked by a commercial treaty with England that opened France to free trade, incursions into China in partnership with England, intervention into Mexico, the construction of the Suez Canal, programs of improvement in the city of Paris and, finally, the Franco-Prussian War of 1870 that saw the end of the regime. It was an era, surprisingly progressive for its time, in which youth, glamour and accomplishment rather than aristocratic birth, were the hallmarks of esteem. Writers and artists were invited to magnificent royal balls. The Empress Eugenie presided over charity sales and was a patron of the arts and literature. The Emperor supported universal suffrage, the working classes and the church. 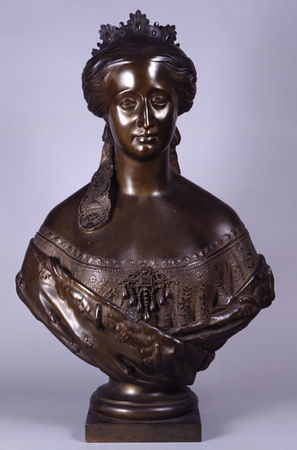