VIENNA.- For the first time in Austria, MUMOK presents a retrospective of Cy Twombly’s work. Twombly, one of the most important artists of his generation (b.1928), has been based in Italy since the late 1950s. His work diverged from the abstract expressionist tradition dominated by such figures as Jackson Pollock, Willem de Kooning and Mark Rothko. Twombly first gained recognition with large format, monumental paintings with gestural and often textual inscriptions. His works have been influenced by poetry and classical mythology but also by Mediterranean landscapes and lighting. The exhibition “weaves together” approximately 200 works from every period, bringing his much lesser known photographic work together for the first time with his paintings, sculpture and drawings.

Since his studies in the 1950s — Twombly studied at the same time as Robert Rauschenberg at the legendary Black Mountain College — his work has developed concurrently in many different media: Painting, Sculpture, Photography and drawing have corresponded with each other in a process of continual transference. Twombly uses drawing in his paintings, oils in his drawings, paint on his sculptures and makes references to his pictures and objects in his photographic work. The retrospective at the MUMOK shows a collection of all of the different media heightening an awareness of their simultaneity and subtle interconnectedness. The exhibition has been organized into relatively loosely defined categories such as the establishment of white, the use of writing, the significance of the principles of collage and aesthetic means of expression, as well as the movement on the canvas of impasto paint.

Hardly any other artist in the 20th century went as far to approach the “zero point” of modern art as Cy Twombly did. Children’s handwriting exercises, thoughtless scribbling and graffiti constituted contemporary points of departure for actualizing the experience of mythical stories, drawing a connection to the major themes of Mediterranean culture, with works that alternate between sensibility and rawness, fine filigree precision and expressivity. The color white, that has remained constitutive both for Twombly’s paintings and his sculptures, represents the matrix of this process of transformation. It registers the multiple traces of the work process, opening up a poetic space of possibilty that Twombly suggestively fills with inscriptions, names and lines from poems by poets such as Rainer Maria Rilke or Sappho.

Up to now, few people have been aware of the fact that Cy Twombly has worked with photography since the early 1950s. His rich photographic work will be shown together with his other works for the first time at the exhibition in Vienna. Stylistic devices such as the intentional use of the effects of over exposure or blurry focusing can in many ways be seen in connection with his use of white or the way he lets colors and forms flow down the surface of the painting. But the photographs also offer insight into the environment surrounding his creative process — evoking the images of Constantin Brancusi’s studio — whether in his adopted country of Italy, in Rome, in Bassano di Teverina, or the coastal village Gaeta, or, more recently, in the city of his birth Lexington, Virginia.

Cy Twombly was born April 25, 1928 in Lexington, Virginia. He began his studies in 1947 at the School of the Museum of Fine Arts in Boston and then in 1945/50 at Washington and Lee University in Lexington. In 1950, he went to New York and continued his studies at the Art Students League. It was here that he got to know Robert Rauschenberg and Jasper Johns. One year later, he transferred to Black Mountain College in North Carolina where he studied with Robert Motherwell and Franz Kline. Together with Rauschenberg, he traveled through South America, North Africa, Spain and Italy in 1952.

Twombly taught at the Southern Seminary and Junior College in Buena Vista, Virginia in 1955/56, and then returned again to Rome in 1957. Two years later, he finally moved to Italy. In 1968, the Milwaukee Art Center presented his first retrospective in the United States, followed by large international exhibitions: The retrospective at the Kunsthaus Zürich (1987) traveled to Madrid, London and Paris. While the exhibition at the Museum of Modern Art (1994) continued on to Houston, Los Angeles and Berlin, followed by a large retrospective at the Pinakothek der Moderne in Munich (2006). In 1995, the Cy Twombly Gallery run by the Menil Family was opened in Houston. The most recent retrospective began at the Tate Modern in London (2008) and went from there to Bilbao and Rome. 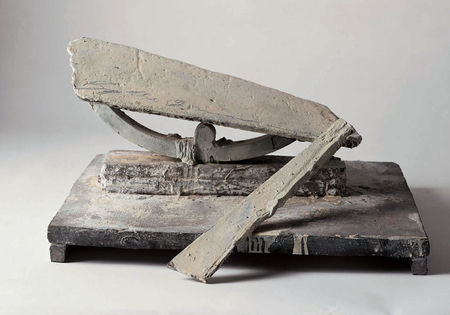 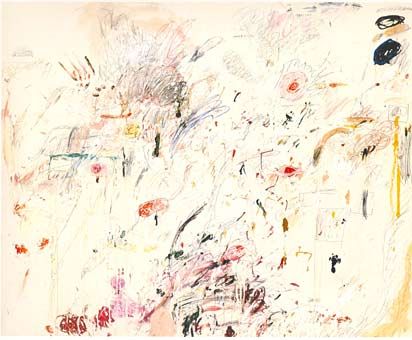 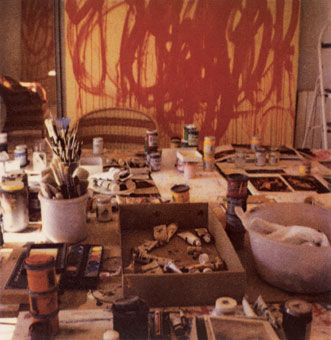 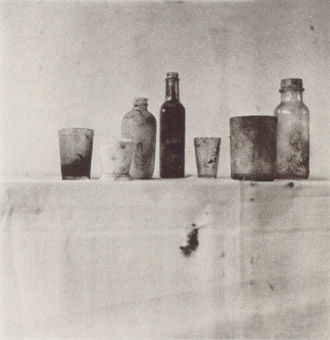 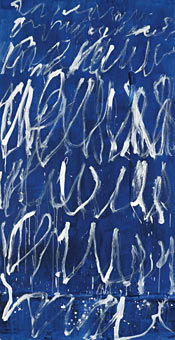