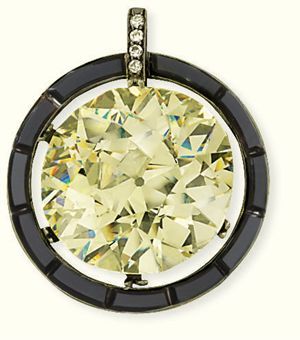 Notes: By family tradition this yellow diamond used to belong to Lady Roselyne Galway (1876-1963). She married Baron Raphael d'Erlanger, a French biologist in 1894 and her second husband, Sir Henry Lionel Galway, was appointed governor of South Australia in 1914 shortly after their wedding. She was noted throughout her life for her dedicated charity work, including the establishment of the South Australian branch of the British Red Cross Society. Her strong personality and untiring charitable activities led the Adelaide press in 1919 to comment that she had raised the whole status of women in public life