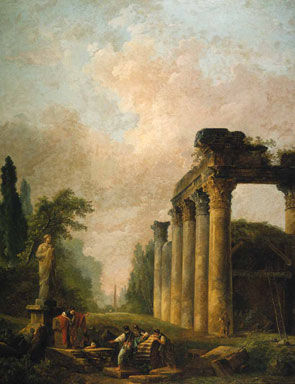 SAINT LOUIS, MO.- This summer, the Saint Louis Art Museum will transform one of its main level galleries into a painting conservation lab for Reviving Antiquity: Restoring Hubert Robert’s Views of Ancient Ruins.

Museum visitors may recall that the group of four Robert paintings hung for many years in the corners of Grigg Gallery. Ever since the reinstallation of Grigg Gallery in 2006, the paintings have been in storage, awaiting conservation.

In 1996, Museum Paintings Conservator Paul Haner cleaned and inpainted one of the four (The Column). The Column is currently on loan to the Pulitzer Foundation for the Arts, where it is on view as part of the Pulitzer’s current exhibition, Ideal (Dis-) Placements: Old Masters at the Pulitzer.