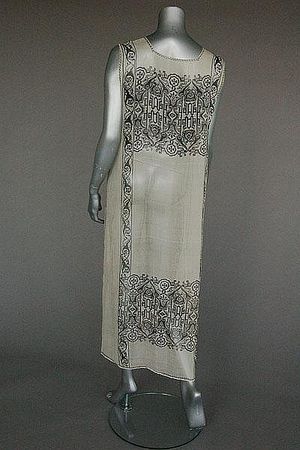 the stencilled tie belt marked to the reverse `Fortuny', the shoulders threaded through with cords weighted with brown and white flecked Murano glass beads, contained in original Fortuny box, (4) Estimate £1,500 - £2,000

There is a Provenance note which states "Bought from Mariano Fortuny (himself) in Italy in 1935 by Louise A. Corbusier for her spoiled daughter Nancy"

Note : Pleats have fallen out of place at the rear seat and the underarms. There is a small and faint brown stain on the front skirt of the gown approx 2cm x 3mm; faint perspiration stains at the underarms and one tiny pinhead sized hole. Drawstring at neck has been replaced with a cream cord, slight soiling to inside of neck edge. The hem is generally good - approx 1cm of silk ribbon hem binding has come away and needs re-stitching, a few fairly miniscule holes/separations in the silk to the hem but generally good, fabulous colour. The belt looks as though it has been made narrower, more tapering. There are splits in the silk along the edge of the belt. Where two lengths of silk have been joined vertically across the width of the belt the silk has separated. The box has 2 ½ in strip from lid edge/side which has detached. The box has been initialled in ink 'CKW'. 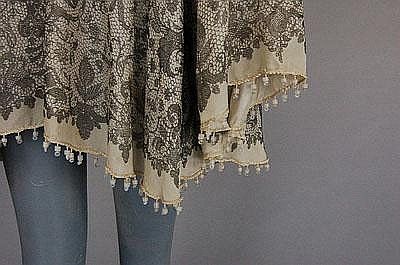 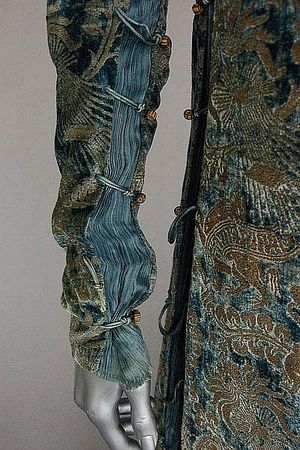 Provenance : Camilla Eibenschutz, the beautiful and talented wife of Dr Wolfgang Huck editor of some of the most influential newspapers during the Weimar Republic. She was a renowned German actress and was a role model for many women of her generation. She limited her career to the stage, performing mainly in productions by Max Reinhard (1873-1943). She performed in his 1907 production of Shakespeare's Romeo & Juliet as Juliet (see image).

Note : A couple of faint brown marks to the side panels near the hem on each side, remarkably fresh condition, 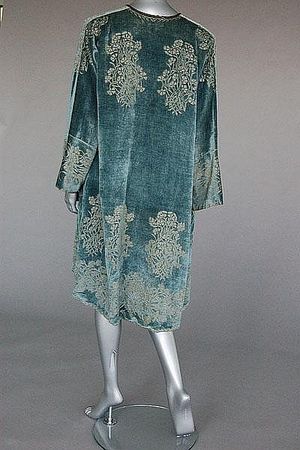 Note : Good condition, faint brown stain near hem of front left panel but not immediately noticeable, pink silk shoulder pads later added, lining has a few small speckled brown stains to one side but not very noticeable, a few small spotted marks to lining lower left hem and one small grey smudge mark (minor), very faint impression in the pile of the velvet on the front right panel possibly from an iron - hardly noticeable through, 2 small brown rust marks on reverse of right cuff, tarnishing to metal ties. The Property of a Lady of Title. A Mariano Fortuny Delphos gown, early 20th century

of golden apricot pleated silk, the armholes and sides adorned with striped Murano glass beads, one of the inner selvedges printed `Made in Italy, Fabrique en Italie, Fortuny Depose'. Estimate £1,200 - £1,800

Provenance : by descent from the original purchaser.

Note : some bagging to pleats at groin and buttocks region. Drawstring at upper armhole edge has been stretched and come loose and needs re-stitching, one or two tiny pinhead sized holes to the hem. Very faint stains in the silk to front and back but very hard to detect.